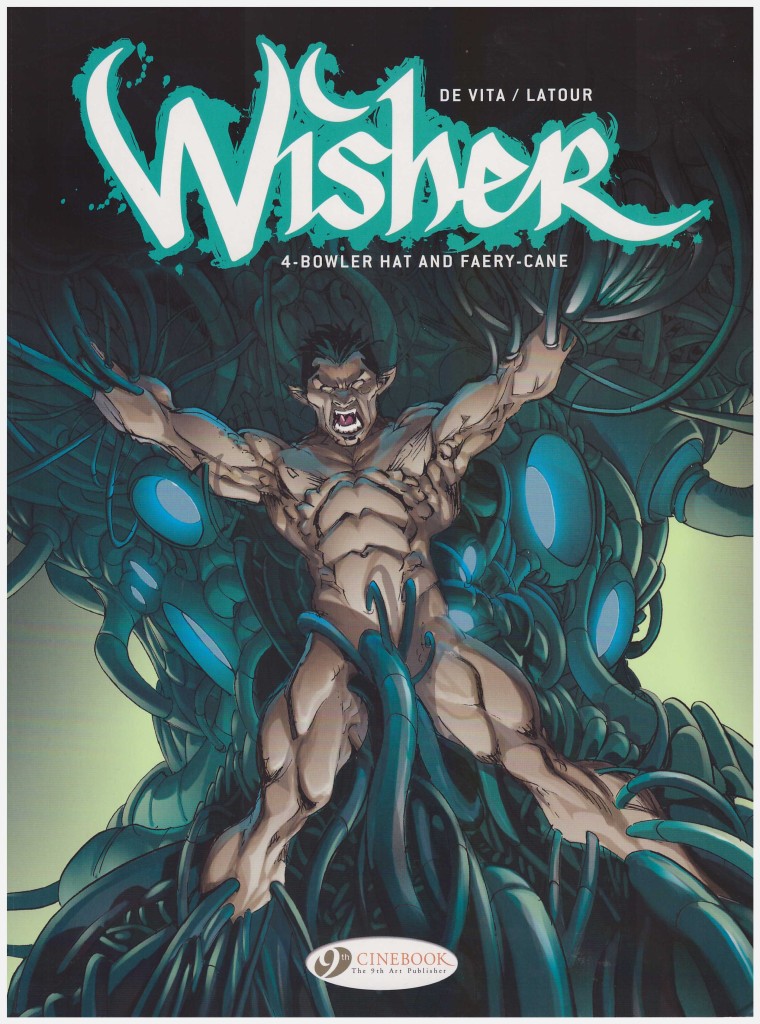 To date Wisher has been a consistently frustrating experience, either stalling with padding or annoying with lapses of plot logic, but the compensation has been the storytelling proficiency of Giulio DeVita, and the underlying feeling of potential. Well, there’s a quality boost within Bowler Hat and Faery-Cane, the conclusion to this four volume series.

It opens immediately following the cliffhanger finale to Glee, and drops in a couple of explanations as to why the solutions surely everyone considered on reading the ending to the previous volume aren’t going to work. What’s needed is some dragon’s blood, and the only place that’s located is securely within the headquarters of MI10, the very people who’ve been hunting down the magical community.

To this point it’s been Merlin who’s acted as mentor to Nigel, but Goodnight, the vampire confined to a wheelchair (nice touch), now adopts the role of master planner and voice of reason. Sébastien Latour’s plots have never lacked imagination, but here the ideas are affixed to a linear structure adhering to an internal consistency. It’s liberating, suspenseful and results in the best volume of the series, with a couple of unpredictable road blocks dropped in.

DeVita’s art is well up to high standards he’s applied to the previous books, with slick action storytelling and decent character design. With one exception. There’s a new hybrid character introduced towards the end of the book with quite the pivotal role. The resemblance to Marvel’s blue, furry Beast, however, is really too close.

Some glaringly obvious questions remain. The hook to Wisher when introduced is that the importance of Nigel, first seen in Nigel, is that he’s allegedly a genie, and releasing the full potential of the creature locked within will reactivate the Faerie society and strengthen them. Yet, the book ends, pretty well definitively, and the genie within has barely played a role. It’s quite the astonishing omission.

More minor points are also unresolved, and it was presumably the case that Wisher was originally intended to continue beyond this opening story arc. As it’s been five years since this book was published in France, and the creators seem ensconced on other projects that’s unlikely. What’s left is a series packed with interesting ideas that never entirely reach fruition.