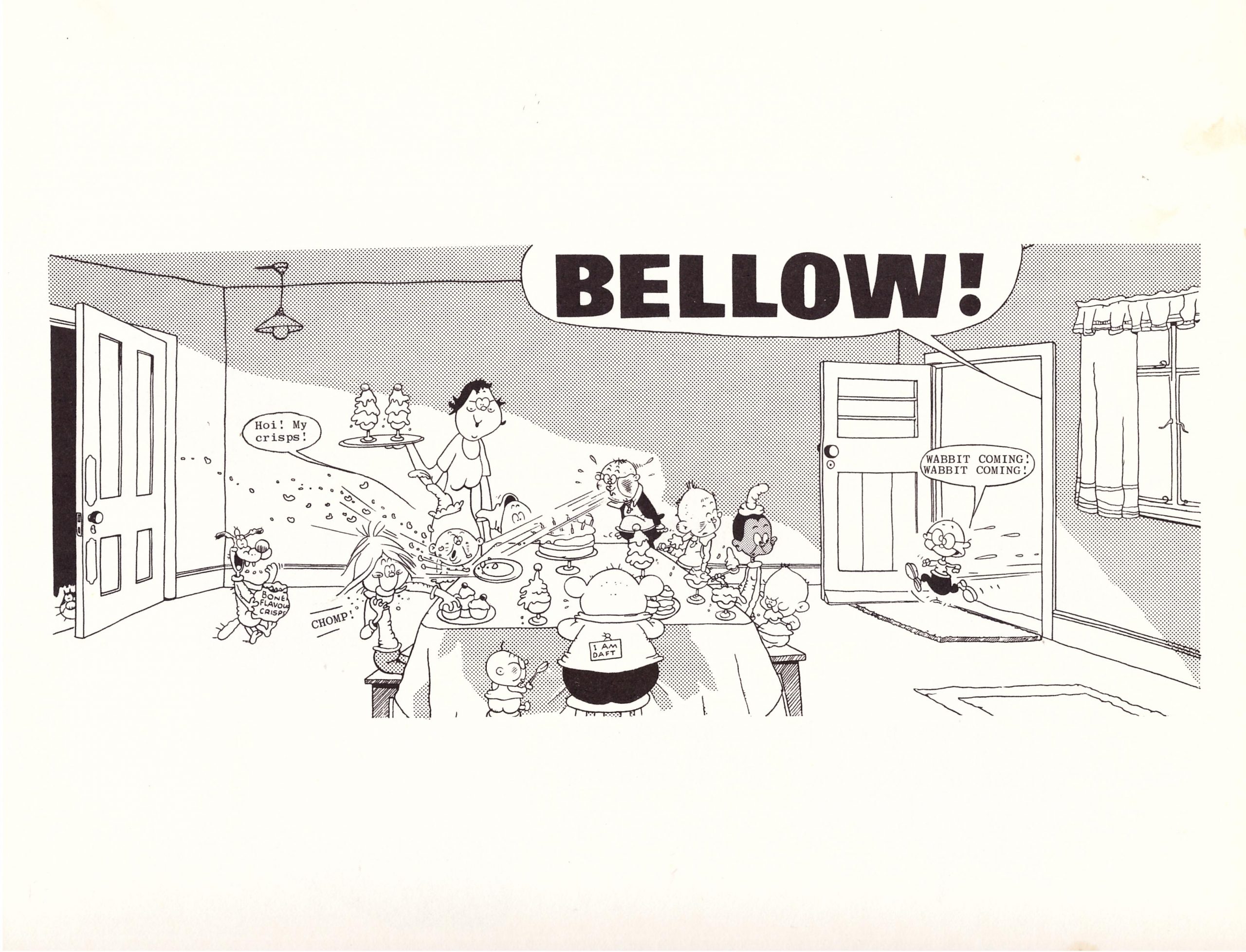 Few series of books can have plummeted down the quality scale as rapidly as Willy the Kid. There’s a good case to be made for the first volume being Leo Baxendale’s masterpiece. Nowhere near as much effort was put into the second, and this selection is self-sabotage, with no concern for the readers of the time subjected to a 150% price hike. Publishers Duckworth attempt to compensate for just 44 pages, bulking them out by using thicker and whiter paper stock, but let’s assume the reduction in pages was beyond Baxendale’s control not dictated by what was submitted. That’s being generous.

What was submitted includes an ad for Baxendale’s book of thoughts on producing comics; several scribbled cartoons allegedly drawn by Willy; a two page text story unfinished because Willy didn’t have the space; two other text stories ending with half a blank page; strips of labelmaker tape explaining the absence of another illustration; three spot the difference pages, two using an illustration from the previous book; and no fewer text story pages despite twelve fewer pages overall, all of them using a far larger typeface than previous volumes. It’s more like feeble content from someone putting out a first fanzine to entertain their mates than the work of Britain’s greatest creator of children’s comics. It smacks of Baxendale not giving a toss any more.

Only 25 pages of comics appear, some random pin-ups, one a page of sound effects, meaning there’s only a single strip apiece for Willy and Spotty Dick. The latter is the standout, the jokes predictable, but funny, the dialogue bizarrely surreal, and the art even looser than the previous book. Willy’s strip concerns him having to babysit his little cousin, but tempted out to join his mates at a tea party anyway. It would be a lie to claim Baxendale once put more effort into a single page of the Bash Street Kids than he does for nineteen panels of the Willy strip spread over twelve pages, but it’s not far from the truth. A couple of garden scenes have a busy joy to them, and the sample page could be Baxendale’s try at composing a Giles cartoon, but the Baxendale of old would have compressed this plot into a spread at the very least, and possibly a page.

A few laughs are to be had from the text pieces, some written as if by Willy, but as before, these aren’t Baxendale’s strength, and any half-decent comedy writer could have done the same. Gordon Robson’s blog presents correspondence from Baxendale indicating why this content is so lacklustre. He was far more enthused about working on his autobiography in 1977, and blew the deadlines for what was supposed to be a Christmas annual. Consequently it was offered to the book trade in 1978 with a far lower print run, and remains a very elusive and expensive used book. Quite honestly? Move heaven and Earth to find the first Willy the Kid, but if Baxendale couldn’t bother with this, why should you?