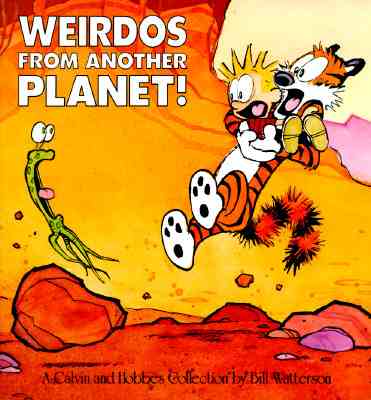 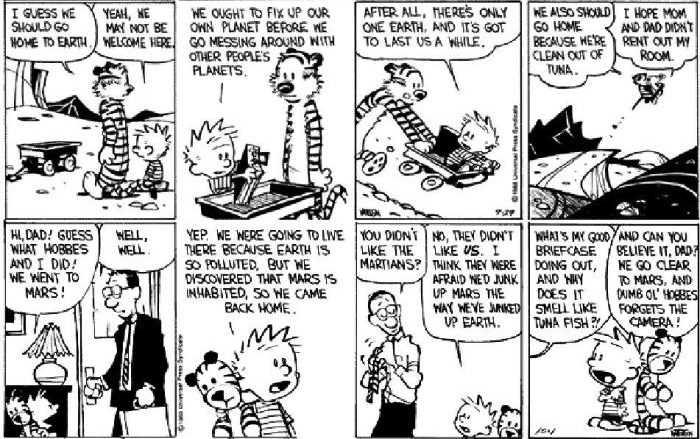 The fourth year of Bill Watterson’s hilarious Calvin and Hobbes daily newspaper strip is collected in Weirdos From Another Planet! Most of the recurring situations from previous volumes are visited again here, becoming funnier with each new repetition. Calvin’s cold war with Rosalyn the babysitter hots up when he interrupts a phonecall with her boyfriend Charlie (“Your girlfriend’s a sadistic kid-hater! Don’t ever marry her! She’d be a terrible mother!”). He warns his dad about the drop in his approval ratings due to ‘scandals’ like Bedtimegate and Homeworkgate. The family vacation is almost not disastrous, there’s fresh torment for Suzie Derkins, Hobbes tries to teach Calvin some wildlife skills and Calvin finds an urgent use for the transmogrifier.

The sequence of strips that give this volume its title concern Calvin and his tiger best friend Hobbes taking a trip to Mars. Earth is so polluted that Calvin is disgusted with humanity and decides to leave. Bill Watterson brings his usual funny blend of philosophy and absurd logic to this sequence of intrepid space exploration and Calvin for once has to try and see things through someone else’s eyes. If he’s an outsider on someone else’s planet, then who are the weirdos really?

Weirdos from Another Planet! also sees the introduction of Calvin’s second most dynamic alter ego (after Spaceman Spiff, that is): the incredible Stupendous Man. The difference in this case is that Stupendous Man in his bright red hood and cape is actually visible to all, particularly to his arch-nemesis, Mom Lady. This is another great collection of very funny, sometimes thought-provoking, beautifully drawn strips that is almost impossible to put down.