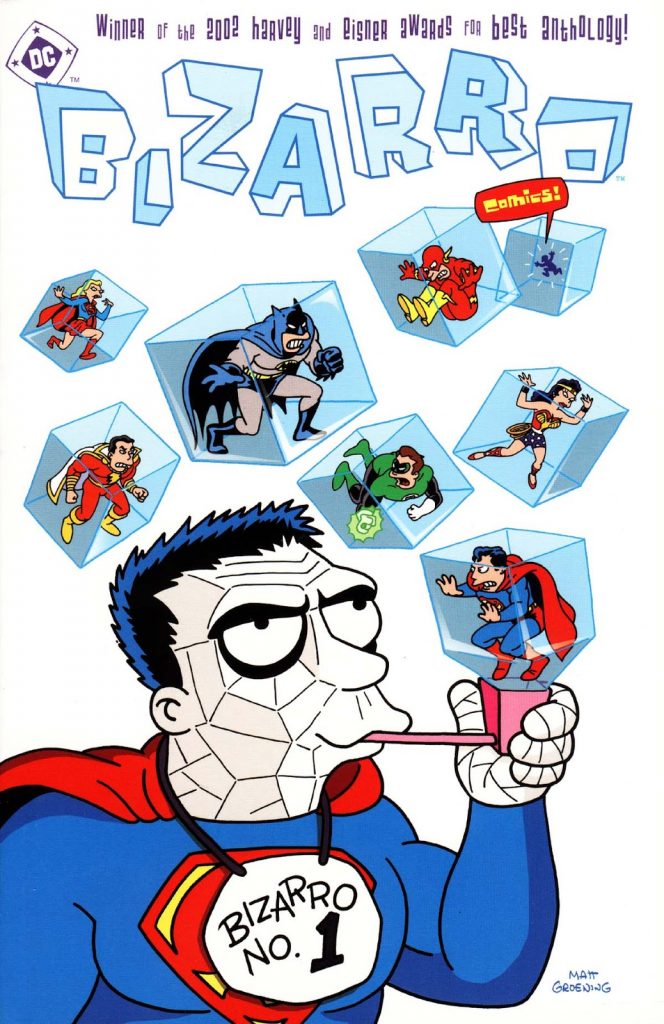 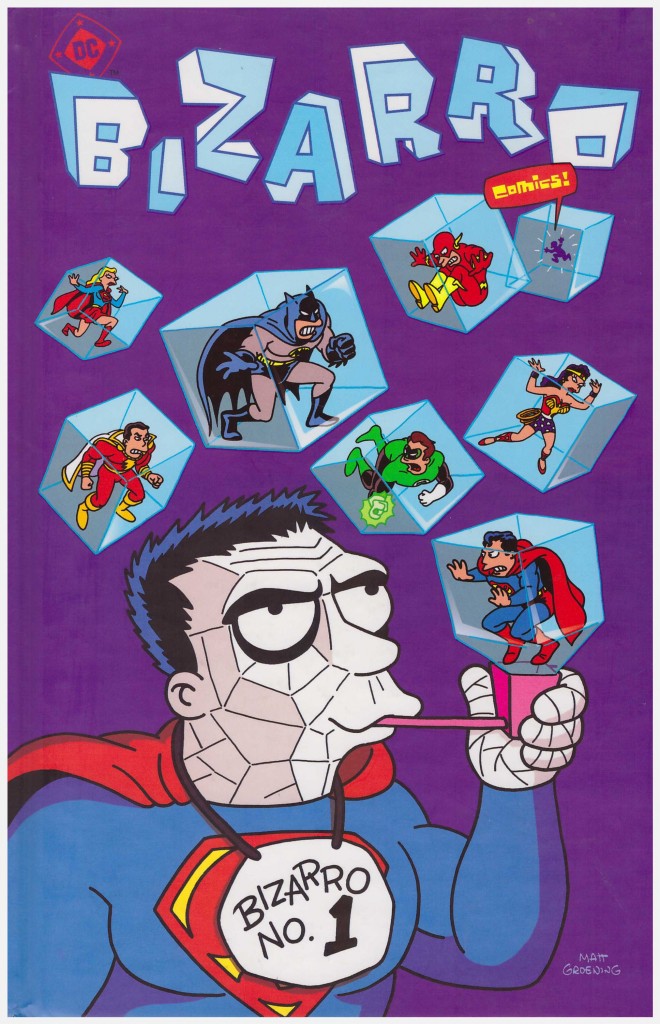 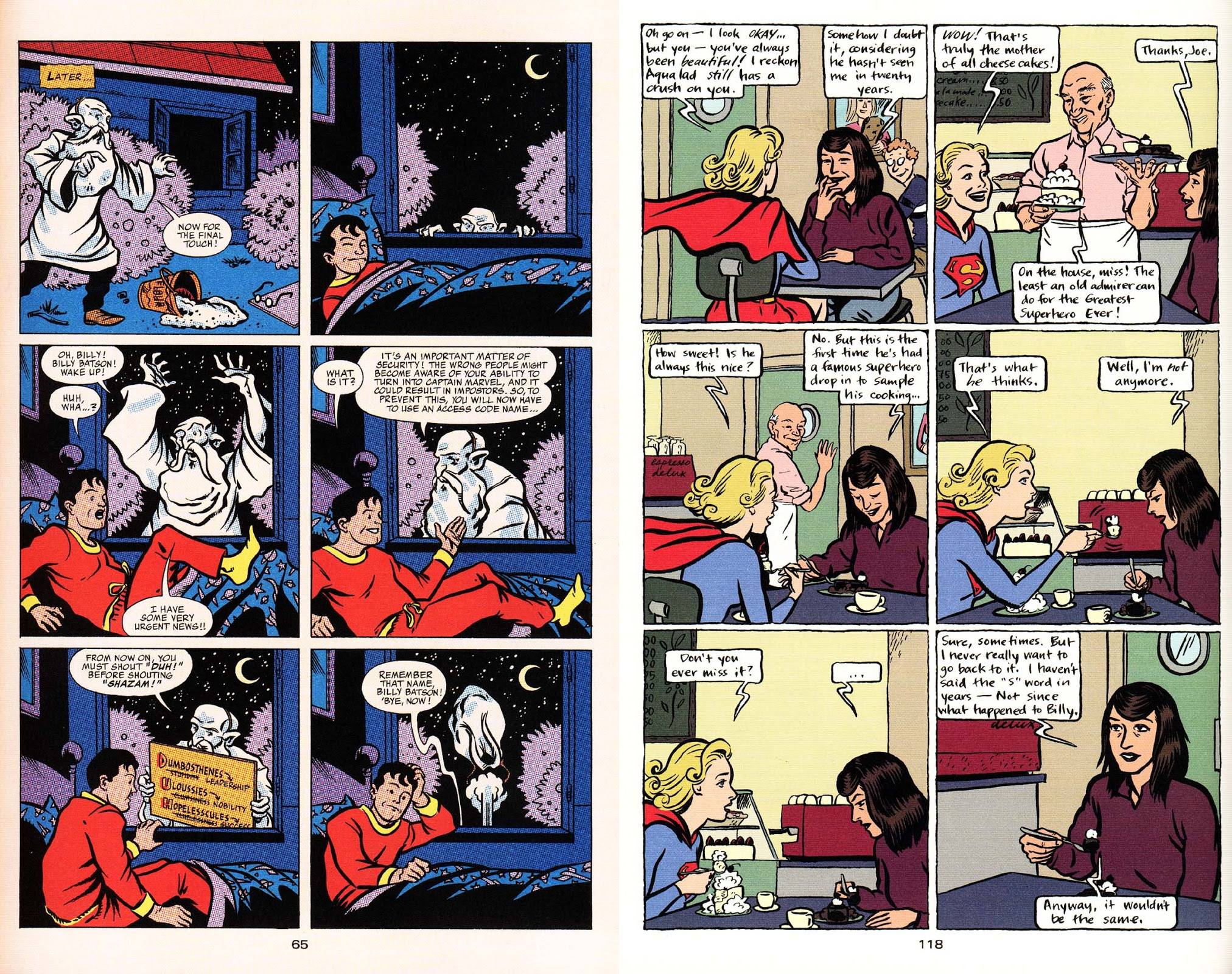 Bizarro is a quirky alien created in the 1950s as the mirror image of Superman. Among his eccentricities are living on a cube-shaped planet, reversing the meaning of words, and opposites of Superman’s powers. The name passed into the wider consciousness, and is a fine choice for a collection of comics featuring DC characters, but produced by creators operating well away from the superhero mainstream. Given relative editorial freedom, they were able to maintain their own distinctive approaches with little compromise.

The most notorious content is a Kyle Baker story about the frustrations experienced by the babysitter of an infant Superman. A sequence in which she microwaves the baby to dry him off resulted in the entire print run of the comic where the story originally appeared being pulped by publisher’s decree. It’s beautifully drawn by Kyle Baker in a faux animation style, a highlight here, and Eisner Award winner for Best Short Story in 2000. Was it an influence on Pixar’s short Jack-Jack Attack, found accompanying The Incredibles on DVD?

There are plenty of delights to be discovered along with much head scratching, and the occasional piece that with very little alteration would grace a standard DC title, such as a coffee shop conversation between Mary Marvel and Supergirl, charmingly produced by Dylan Horrocks and Jessica Abel. Tony Millionaire and Dean Haspiel take advantage of printing technology to have their pages given a dated gloss, browning around the edges, with Haspiel accentuating the effects of 1960s four-colour printing, and Millionaire delivering Chip Kidd’s Batman story as gothic horror. Brian Ralph’s Aquaman story is entirely in a distinctive green and white

Chris Duffy and Stephen DeStefano produce a wacky extended framing sequence explaining how Bizarro himself is producing the material. Other highlights include one and two page strips written by Evan Dorkin scattered throughout the book, Bob Fingerman and Pat McEown’s depiction of Tin from the Metal Men having a night out, and Dave Cooper’s odd tale of Wonder Woman hitting the mall. Batman’s world brings out the best in contributors. Dorkin draws Ivan Brunetti’s Batman and Superman team-up, Eddie Campbell and Hunt Emerson supply a downbeat take on 1960s Batman villain the Eraser, and Paul Pope and Jay Stephens have a child discover the Batcave.

Most stories charm to some degree, but appreciation of many will depend strongly on your response to the work of marmite creators such as James Kochalka and Steven Weissman. The idea was successful enough to spawn the Bizarro World follow-up, and several years later Marvel attempted the same idea with Strange Tales.