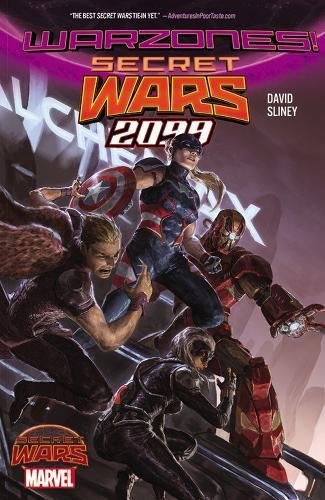 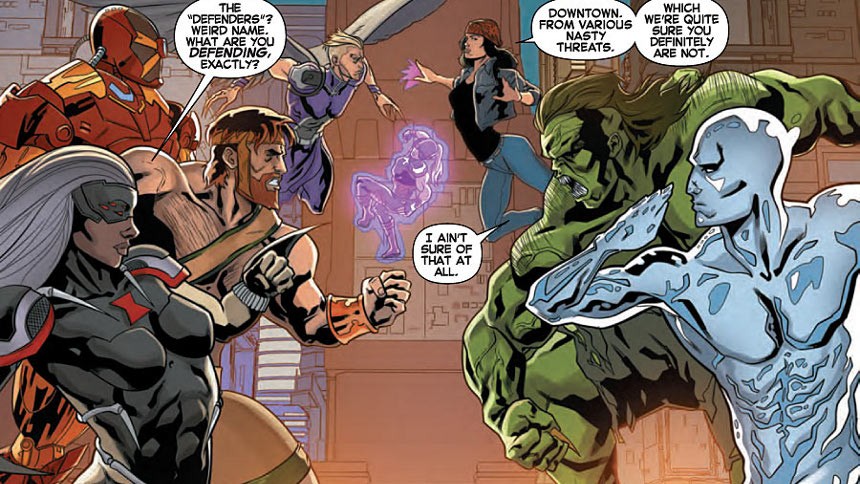 As the title tells us, the effects of the Secret Wars crossover extend forward to world of 2099. With the creative team of Peter David and Will Sliney already doing a good job presenting the adventures of Spider-Man in that era, they were a natural choice to expand their remit to the other superheroes of 2099. In this world Spider-Man is a rarity as superhero not contracted to the Alchemax Corporation, who fund and control the Avengers. The names are known, but only the near immortal Hercules is the character from the present day Marvel universe, reckless carousing still a priority. The team are led by a female Captain America and otherwise feature Black Widow, Hawkeye, Iron Man and Vision, but not as we know them.

Deceit is the central theme of David’s story. Some of the cast are deceiving themselves, others being deceived. His plot harkens back to the earliest long-form Marvel crossover, pitting the Avengers against the Defenders. Again, most of the names are familiar even if those bearing them aren’t. It’s to be presumed the Silver Surfer is the original article, but he’s used so sparingly that’s never clarified. Dr Strange, Hulk, Sub-Mariner and Valkyrie aren’t the original versions. The plot hinges on the law insisting that all superheroes be registered with and employed by Alchemax, something to which the Defenders take exception.

Sliney’s good at creating a viable futuristic environment for these Avengers, but there’s some decidedly dodgy figurework, both with regard to proportions and foreshortening, and it’s a recurring problem. David’s plot, meanwhile is an okay superhero romp, but hardly approaches the best he can do. The dialogue, usually such a strength of his work, rarely sparkles, and the most interesting aspect of the entire book is Captain America. Here David injected some originality into manufactured patriotism, and the same applies to a couple of surprises in the final chapter. David’s a notch above most superhero writers, so even when he’s going through the motions it’s readable, but set your expectations low.