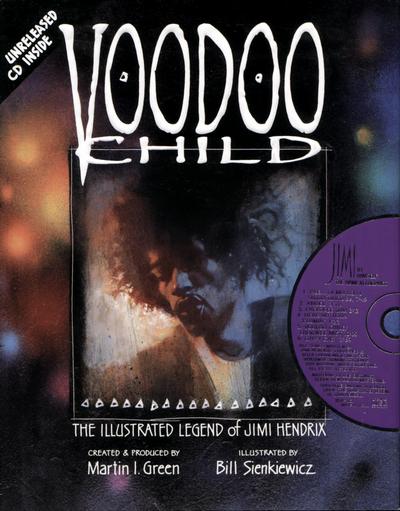 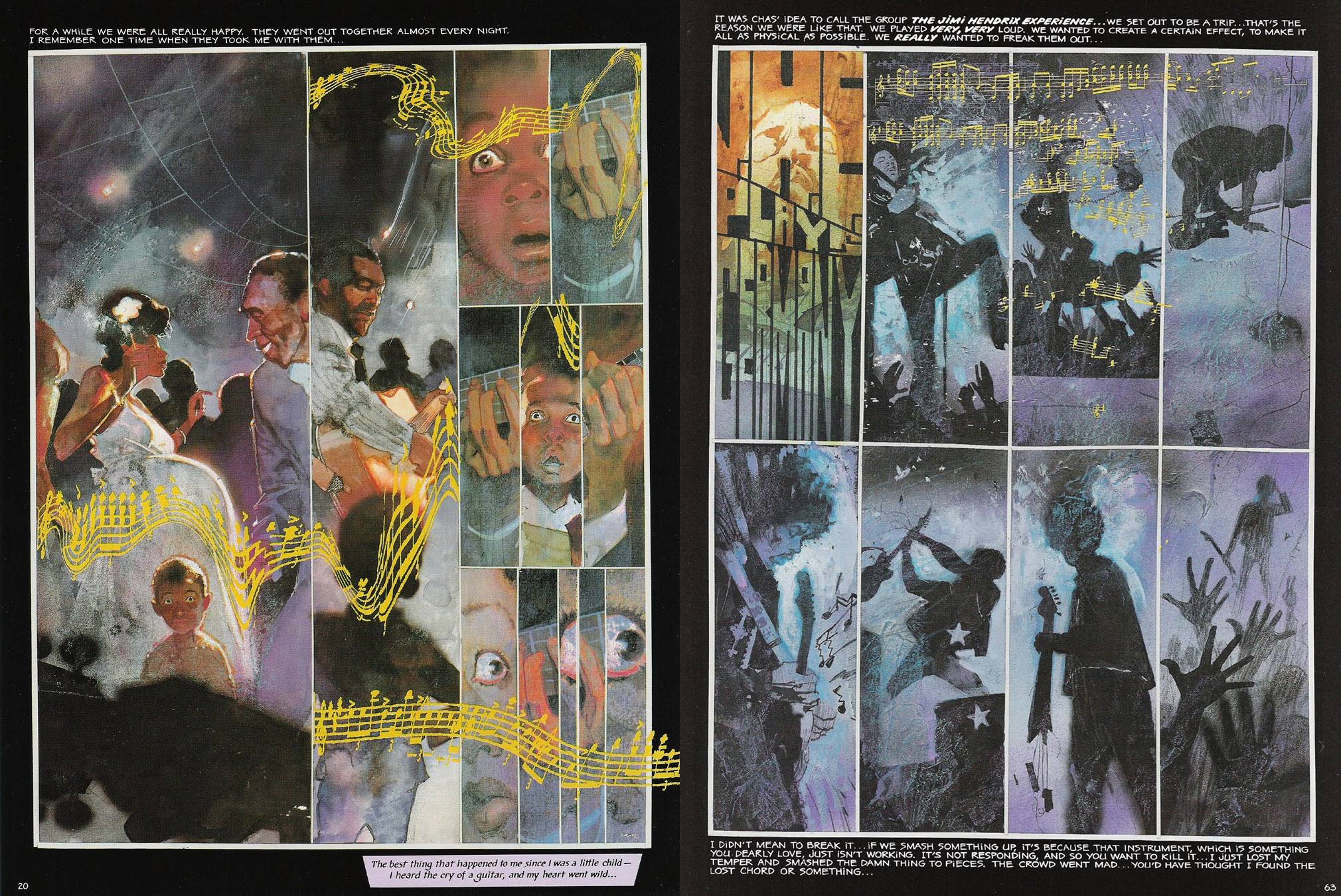 There’s a distinct connection between musician Jimi Hendrix and comic artist Bill Sienkiewicz. They followed a similar path of honing their craft relatively anonymously before seemingly taking a giant creative leap to become awesome maverick creators, able to channel their talents in a unique way that no-one has been able to copy successfully. There’s also a case to be made for both burning bright and briefly. Hendrix was more troubled and died young, thankfully not the case for Sienkiewicz, but his artistic preference for many years hasn’t been comics. In 1995, though, Sienkiewicz had a decade of artistic triumphs and recognition to his name when he collaborated with Michael I. Green on this hardcover biography. Well, sort of biography.

That’s a good idea, as even in 1995 there wasn’t a shortage of people publishing books about the time they had Hendrix in the back of their cab. Green approaches the task by having Hendrix narrate his life at the point of his death, punctuated by constant reminders of his time being up. Whenever possible Green portrays events via quoting the lyrics to Hendrix songs, so his young mother’s frequent absences from home are accompanied by Gypsy. It’s a valid evocation of how the influences fed into the songs, and clever in places, but repeated too often. It’s accompanied by frequently banal dialogue, formal and stilted beyond the point where it can be claimed as an authentic voice.

However, Sienkiewicz at his peak patches over a lot. Evoking music via comics is notoriously difficult, and while Sienkiewicz often resorts to the old trick of musical notes flowing across the page he scores a bullseye by showing the effect Hendrix playing has on others. He also evokes the times and locations magnificently, and Hendrix’s place in them. Photo reference is naturally used, but Sienkiewicz doesn’t just copy the pictures, he adds life, energy and swirls of colour, admirably resisting the use of purple haze, while specialising in a slightly blurred view. Much of Hendrix’s life was about getting people to notice him, and under Sienkiewicz it’s impossible not to. He has the same spontaneity, and this is astonishingly good art.

When moving beyond childhood, Green’s evocation of a peripatetic life is well handled, and he’s even better at bringing out the conflicts of Hendrix’s life, especially the clash of artistic freedom and commercial concern. Anomalies are highlighted. Who ever thought Hendrix on a bill with Englebert Humperdink and Cat Stevens made any kind of sense? Or with the Monkees? We don’t find out as Green keeps Hendrix central to the point of others rarely getting a look-in. Noel Redding is effusively thanked in the opening credits, but barely mentioned in the text, while the addictions that eventually proved fatal are perhaps not highlighted enough. It makes for an interesting, but flawed project. However, as noted, there’s page after page of stunning art.

The original publication was accompanied by a CD of unreleased material, with the book explaining why there’s so much of it around, but don’t count on it still being there on used copies, nor on any buyer having a CD player.