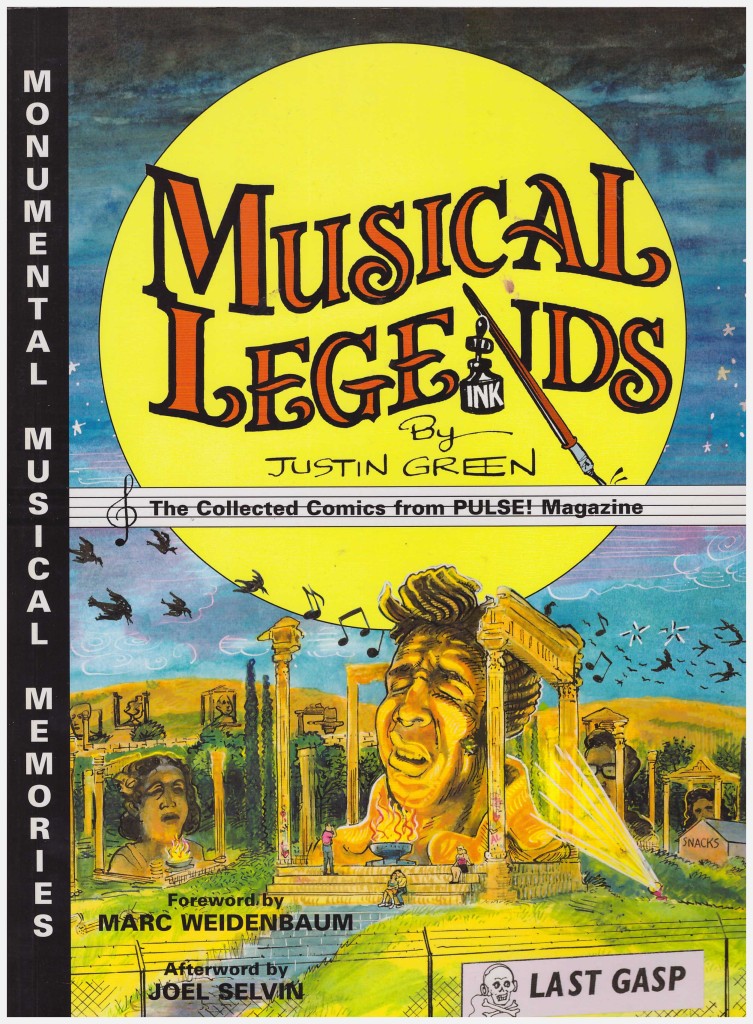 If you’ve an interest in the popular music of the 20th century prior to the 1970s, its personalities and their eccentricities, don’t waste any time with the remainder of the review. If Arthur Alexander, Rodd Keith, Herbie Nichols, Hound Dog Taylor or Townes Van Zandt mean anything to you, you’re the type of person this book is aimed at. Buy it now. You won’t be disappointed.

For ten years from 1992 Justin Green produced a one page strip for each monthly edition of Pulse, the surprisingly informative in-house magazine for customers of Tower Records. And here they are. Although he managed to compress a few near complete biographies into a single page, Django Reinhardt, Charlie Rich and Cat Stevens for example, Green largely concentrates on an anecdote or two exemplifying a career or a personality. Because he’s not personally interested, only three strips here feature bands whose careers began in the 1980s (Alex De Grassi, the Beastie Boys and Rancid). That’s no criticism, though, as Green has wide-ranging tastes and a free editorial hand. He stretches back to the 1800s for Stephen Foster and Jenny Lind, and just after the turn of the century for Irving Berlin, covers jazz, blues, country, swing, rock, world music and much more, and wasn’t concerned about spotlighting the likes of Bing Crosby in a magazine ostensibly aimed at the 20-30 year old.

There are many anecdotes to treasure here. Green details the meeting of Babe Ruth and the equally outsized and talented Fats Waller; Bix Beiderbecke just avoiding being run down by a train when retrieving a whiskey jug; Joe Venuti’s practical jokes; or the relationship between John Lomax and Leadbelly.

Although all those mentioned in the first paragraph are featured, this isn’t just a monument to obscurities. The known and famous also have their day, and Green usually manages to winkle out some less publicised aspect of their lives. The strips are equally engaging whether speculating on the career paths of the likes of Jimi Hendrix and Janis Joplin might have played out had they survived their overdoses, or Wayne Newton’s aggression.

Green’s art is variable. Some strips are scratchy and sketchy, as if he’s cranked out the panels on the back of beer mats between sets by the local blues band at a trucker’s bar, while others are completely designed pages featuring detailed portraits. His colouring, though, makes no concessions for his now being of a certain age. It looks applied by channelling Green’s ten year old self.

Not every strip is written by Green, who also illustrates tales from friends and family – his daughter promotes Rancid – and later anecdotes submitted by readers. These are great. We see Jimmy Buffet’s appeal to teenagers growing with every tin of beer downed, and Chuck Berry’s expectations from a pick-up band. One time Pulse editor Marc Weidenbaum, supplier of an enthusiastic introduction to Musical Legends, writes of attending a Yes gig while at high school, while Richard Younger was personally evicted from a Grateful Dead gig by concert promoter Bill Graham. Green even has his own mystery train story.

This isn’t a book for a single sitting, as these are dense strips, and information overload can ensue. Savour them over time and remember them instead.