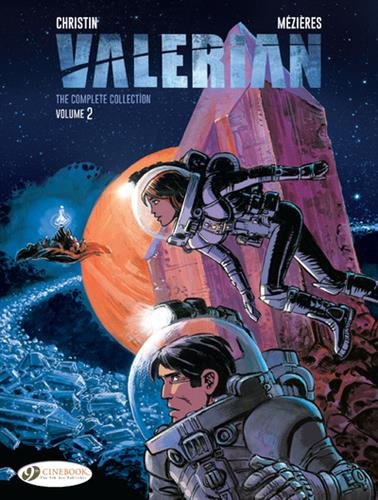 This second chronological gathering of Valerian and Laureline books presents three stories originally serialised in 1971 and 1972, and showcases a gradual progress to what the feature would become, which fully blossoms with the third collection. However, The Land Without Stars and Welcome to Alflolol are very readable, and Birds of the Master good. By this stage the creators have finally settled on what works for the feature, and begun to tailor it accordingly, and Pierre Christin is now plotting entire stories rather than pages for serialisation.

Strong throughout is the bond between Spacio-Temporal Agents Valerian and Laureline, and while Christin always intended them as a couple, it’s not spelled out in these books, which provides an odd mismatched buddy pairing. After the opening book in volume one Laureline had been more or less sidelined, but from the start here she’s an equal partner, and hers is the more vibrant character, as in these earlier books Valerian can be a little dull. While comedy moments still occur, they’re incidental humorous interludes rather than constituents of a slapstick script, and not having to construct gags permits Christin’s imagination to fly. Assorted lifeforms and their talents are seen here and will play an increasing part. Christin also introduces social commentary on the inadequacy of political and commercial systems in the second two stories, and the ecological message there from the start is now accentuated. Most of all there’s a humanity to everything. Stories never become so big that this is forgotten.

Combining three books once again charts the progress of Jean-Claude Mézières. By the final book he’s settled into the artistic elegance seen in the remainder of the series. The final traces of the clutter associated with the original cartooning have been supplanted by superb design skills. The effort expended in producing buildings or beings required only for a single panel is extraordinary, and a talent admiringly noted by Will Eisner in an introduction originally produced for a later book in 1981. The future depicted by Mézières is one grounded in reality. His locations convince as places people actually live, and have the wildness of nature.

Longer reviews can be found by linking to the individual titles but briefly The Land Without Stars is dated, obvious and has several predictable elements to the plot. Its strengths are the incidental details from both creators, Mézières’ contribution apparent from the sample page and the extraordinary insect caravans. Welcome to Alflolol is better, not least for introducing a commentary on capitalism and for having Laureline side with the people who’re in the right, while Valerian follows orders. For the times, this was new territory. The plot concerns the original inhabitants of a planet returning to discover its now populated by humans and undergoing considerable commercial exploitation. At its heart Birds of the Master asks what it takes to allow dictatorship to flourish. Much time is spent establishing a mercilessly cowed population getting by on subsistence level, the distances they have to travel to follow orders, and the methods used to keep them in check. It’s very satisfying, and better is to come in volume three.

As with the other books, this hardcover collection includes endorsements, evaluation and the second part of a joint interview with the creators and Luc Besson, director of the 2017 Valerian movie. Also reproduced are a couple of stunning pages that Mézières discarded as his opening sequence to Birds of the Master.