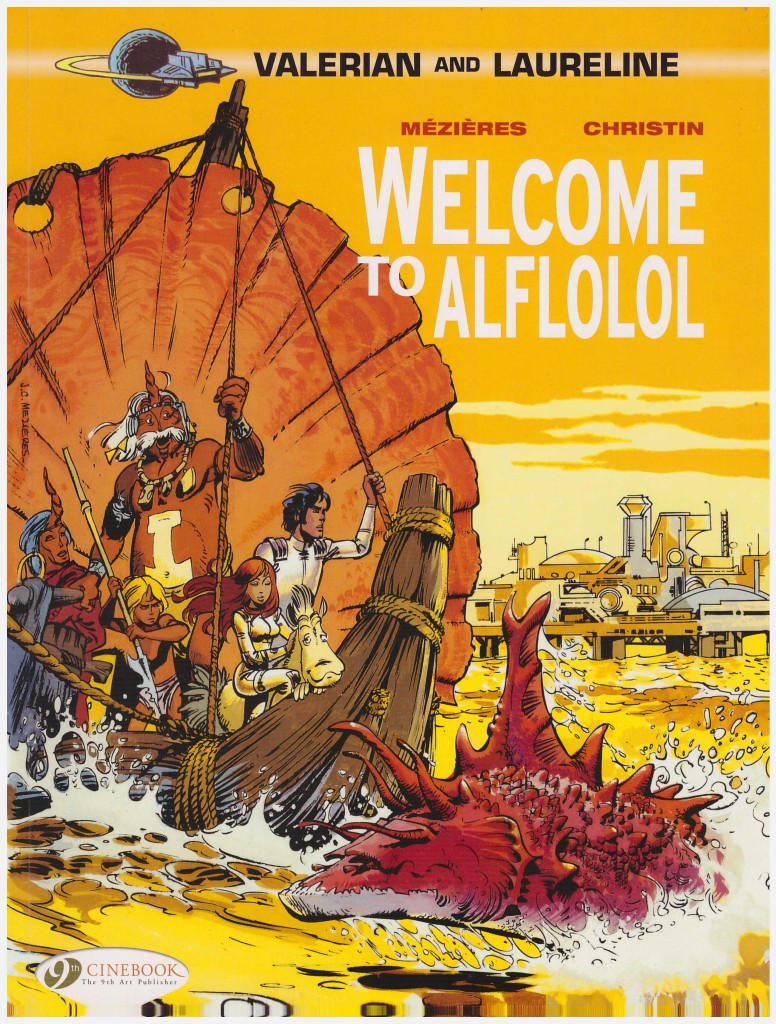 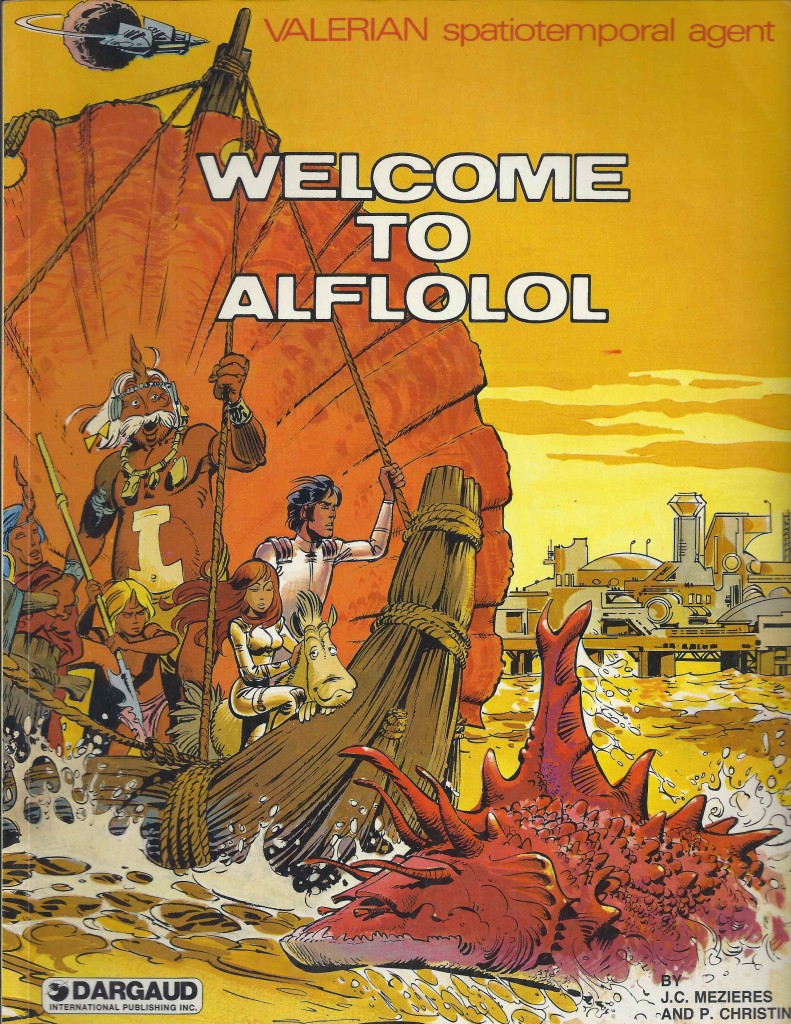 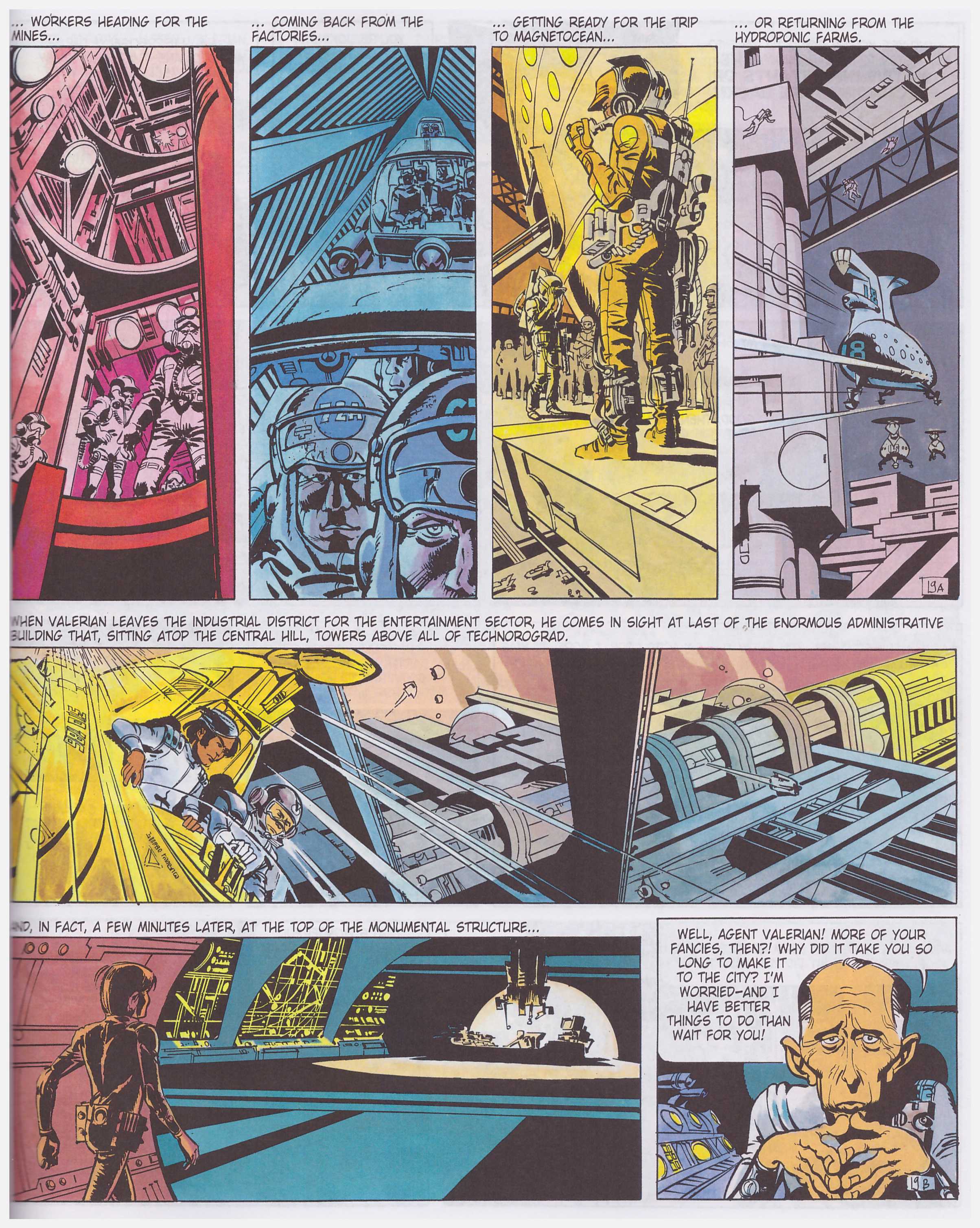 There’s been an upward progression in quality from the first Valerian and Laureline album, and with this fourth book we have a tipping point, as the series now has a greater resemblance to what will come than it does to what has been.

The Land Without Stars featured hints that Pierre Christin was considering the deeper question of how societies on other planets would be structured, be they alien or colonised by humans. That’s further explored in Welcome to Alflolol and Christin adds another recurring theme, a distrust of entrenched power and bureaucracy.

Technorog is a vacant mineral-rich planet first colonised two hundred years previously, and which has since become integral to Earth’s vast colonial empire, as a supply stream of resources subsidises other planets. When the extraordinarily long-lived original inhabitants return to what they call Alflolol, having been away on holiday, it’s greatly inconvenient. There are a few sidetracks thrown in, but the basis of Christin’s story broadly follows the pattern of the USA’s colonisers in their treatment of Native Americans. The ending’s happier, though.

It’s Valerian and Laureline who first encounter the returnees, and they develop different sympathies. Laureline wholeheartedly accompanies them, but while Valerian recognises their right to the planet, both morally and by the terms of galactic treaties, he’s more inclined to search for a solution that enables Earth’s infrastructure to continue operating. When it comes to that Technorog’s Governor is both devious and unprincipled.

If that all makes the book sound very dry, that’s not the case. Christin’s plot is whimsical and charming with a very humanistic approach to all the problems he sets. The Alflololians are an engaging and obliging bunch, and their tolerance is enormous considering the abilities they possess.

Jean-Claude Mézières is still creating very detailed backgrounds, but the cast have a little room to breathe, and he expends an extraordinary amount of effort in designing credible buildings only required for a single panel. By this stage he’s also become far better at characterising his cast via expression.

Early 1980s English language editions of Welcome to Alflolol were issued by French publisher Dargaud, but with a very poor translation, criticised by Mézières who’s fluent in the language, having lived in the USA. The following volume Birds of the Master has never previously been translated. Both are now also available along with The Land Without Stars in the second volume of Valerian: The Complete Collection.