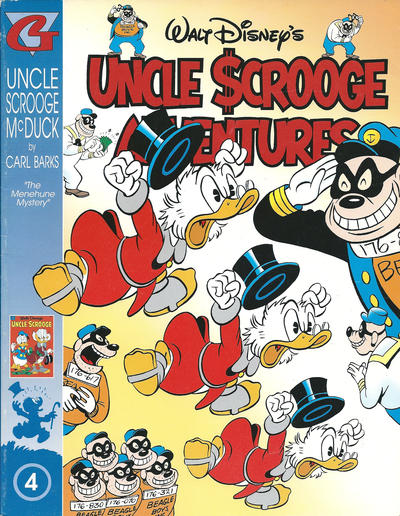 Uncle Scrooge decides he’s going to move his money for safekeeping, changing it all into large denomination notes with plans to transport it to an island he owns in the vicinity of Hawaii. Memorably, he has the notes canned prior to transportation. He considers he’s covered all bases as the canning factory is staffed by robots, so no human (other than Donald Duck to whom he’s explaining everything) will know. Except somehow the Beagle Boys have got wind of the plan.

There’s an enjoyable setting aside of disbelief in cartoons, and Barks exploits it well as Scrooge boards his boat, now staffed by what to the reader are very recognisable as Beagle Boys. As they maintain a pretence of civility and service Scrooge’s only comment is how respectful and obedient they are. The inevitable revelation rapidly occurs, and it’s the resourcefulness of Huey, Dewey and Louie that promises escape, but all parties end up on a Hawaiian island with the Beagle Boys fully in control.

There can be no complaints about the cartooning. The storytelling is instinctive and economical and Barks makes some fine use of silhouettes throughout this tale, occurring at the docks, in the factory, on the island at night, and elsewhere. He certainly illustrates a charming and bountiful Hawaiian island as a place we’d all like to visit, and his Beagle Boys are beautifully designed. They’re lightly sinister without ever being too scary for the children at whom this story was originally aimed.

When it came to creating this tale Barks has credited his wife Garé with making several suggestions, not least the Hawaiian setting, and he also borrowed from The Elves and the Shoemaker. There are other indications that even after fifteen years writing duck stories he’s not always the fully formed plotter. A new character is required, for instance, to provide advice that would in later adventures be sourced by Huey, Dewey and Louis consulting the oracle that is the Junior Woodchucks Guidebook. Ultimately, after three consecutive winners, this is lesser Barks. It begins well enough, but becomes overly sentimental, the ducks don’t extricate themselves from their predicament via their own devices, and several gags have an obvious quality about them. There is, however, a great single page gag strip to close the book.