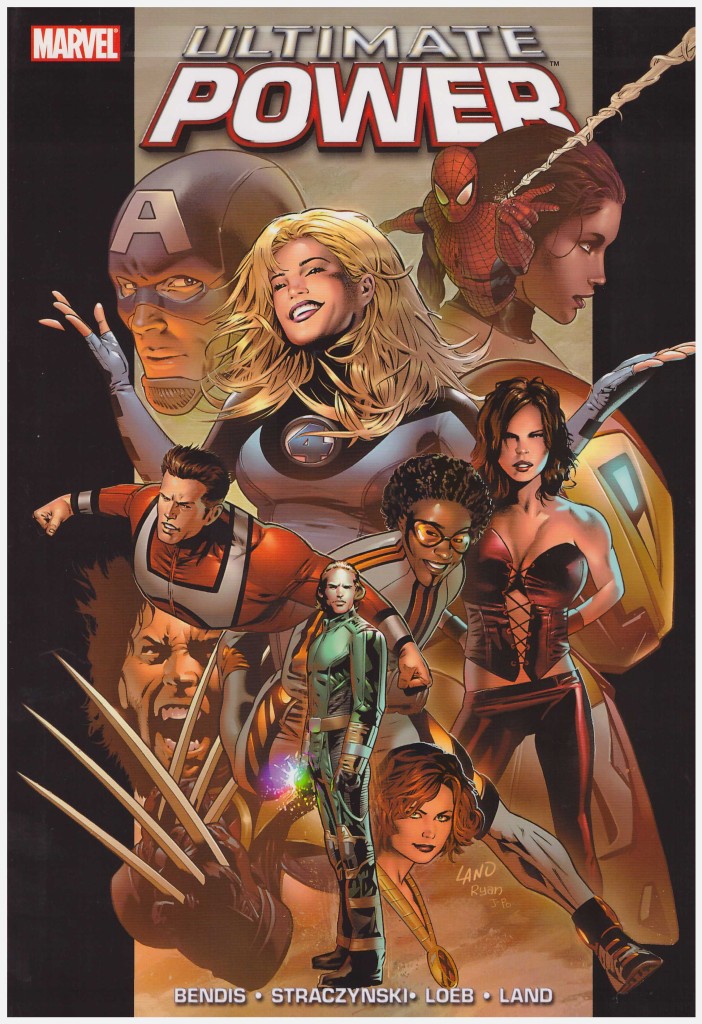 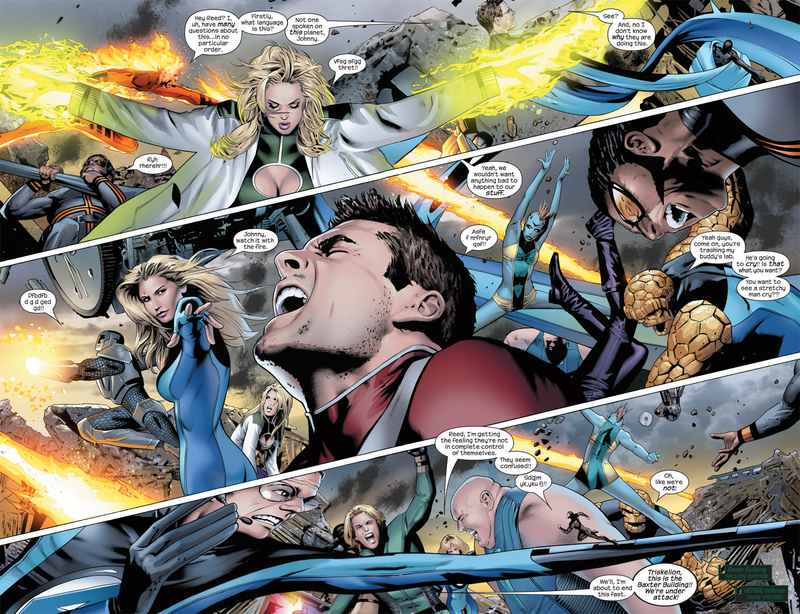 Ultimate Power is both a fun and clever idea that at the time had lasting consequences for the Marvel’s now defunct Ultimate line of comics. Brian Michael Bendis wrote the first three chapters, then handed over to J. Michael Straczyski for the middle portion, leaving Jeph Loeb to supply the conclusion. Much of the appeal, however, depends on your reaction to Greg Land’s art.

His attachment to this prestige project alone is testament to the widespread appeal of his digital manipulation. His pages are packed with what are intended as photo-realistic faces and expressions, presumably created by, in effect, tracing images. This striving for naturalism delivers posses of gaping-mouthed or pouting women with expressions that might have been appropriate for a posed photograph, but constantly distract as ludicrous when converted for the printed page. Given some of the expressions, it seems sexual content is high on the agenda for sourcing images. Furthermore Land’s not adept at disguising his methods. Sue Storm, Kitty Pryde and others have inconsistent hair from panel to panel as he doesn’t bother altering the hair from whatever source he’s used to depict them. His figurework’s not the strongest either. On the positive side, he has a good sense of design and delivers dynamic page layouts accentuating the scale of the occasion.

So, if that’s all perfectly acceptable to you, dive in, as the opening chapters set up an ethical dilemma of culpability and responsibility, amid a slam-bang slugfest between pretty well every well-intentioned super team in the Ultimate universe and the newly arrived Squadron Supreme. Their world has been decimated. Again. Straczynski takes over for the middle eight and introduces an intriguing element of manipulation as assorted heroes arrive on the Squadron’s world for round two.

When Straczynski hands over it would seem crisis point has been reached, but credit to Loeb, he ramps the tension and violence up further with the introduction of another super team and someone Nick Fury has been holding in reserve. This is amid some clever playing about with Straczynski’s manipulation plot. His ending is surprising, shifting the status quo. Those who want to see how the situation progresses can check out Squadron Supreme: Power to the People.

Bonus features include background essays on the major players, and reproductions of Land’s pages as pencilled, then inked. The only difference is that black areas are filled in.

Provided Land’s art appeals, Ultimate Power is relatively slim on plot, but high on cinematic action thrills, and there’s nothing wrong with that as far as superhero graphic novels are concerned.