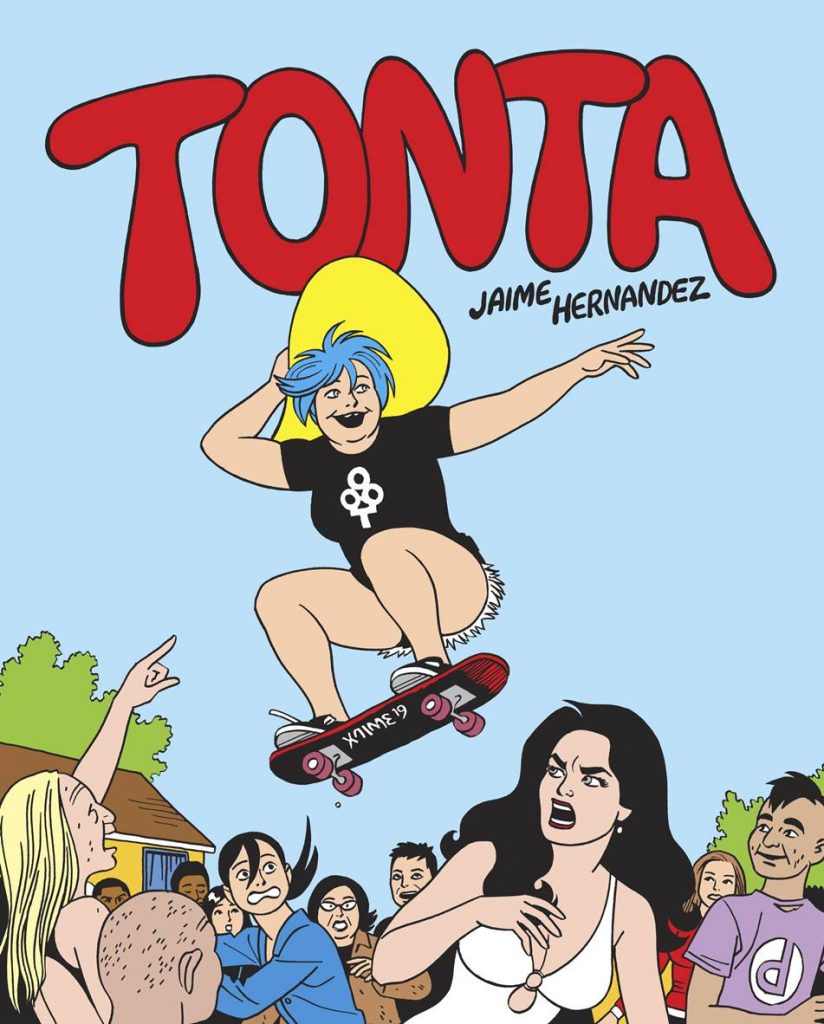 Jaime Hernandez steps away from the familiar ensemble cast of his Love and Rockets universe to bring us a group of new characters in Tonta. At first glance, there doesn’t seem to be anything compelling about the main protagonist of this book collection. Tonta is a rebellious, wisecracking young woman much like Maggie and Hopey were in their teenage days, but with a goofier persona. She doesn’t have the gamine good looks that allowed those two to get away with murder, and the first few pages show her running through the same kind of punk antics but with less charm, like a secondary character who’s pushed her way into the spotlight. As the story progresses, however, the complexities begin to build. Firstly, Tonta’s half-sister is none other than the fabled frogmouth herself, Viv, which explains why she’s so prominently placed on the cover. And as the rest of Tonta’s very twisty family links are unravelled we find the chain has wrapped itself around many characters previously seen in other Locas stories. Hernandez’ way of retelling incidents from the viewpoints of different protagonists fills in details from previous stories here, and the guest appearance of one person in particular is a delight for anyone following these books.

Initially seeming like another retread of the old Hoppers stories, Tonta turns out to be far cleverer and more subtle than the cover of this book might suggest. Hernandez’ drawing is as elegantly descriptive as ever. His carefully composed panels of black and white tease out the events in clear, measured increments with occasional splashes of odd or dynamically posed incident to break up the soap-opera style relationship drama with a few weird, harder to explain anomalies. Amongst the unfussy, naturalistic images every now and again a fabulous composition or a masterfully lit portrait will remind you just how accomplished this work is, despite how easy he makes it look. There are several layers to the events revealed. Long-time readers will appreciate all kinds of seemingly throwaway conversations that shed light on past happenings, but there are also intriguing new situations to think about. By Tonta‘s end the workings of another fractured family have completely sucked us in and left us wanting more. Given the way Hernandez continually twists the style and presentation of his stories, we will probably see most of these characters again, but how they’ll show up is impossible to guess.