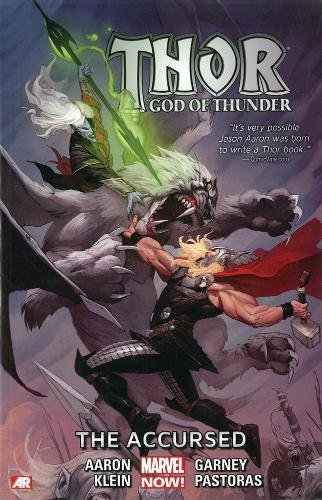 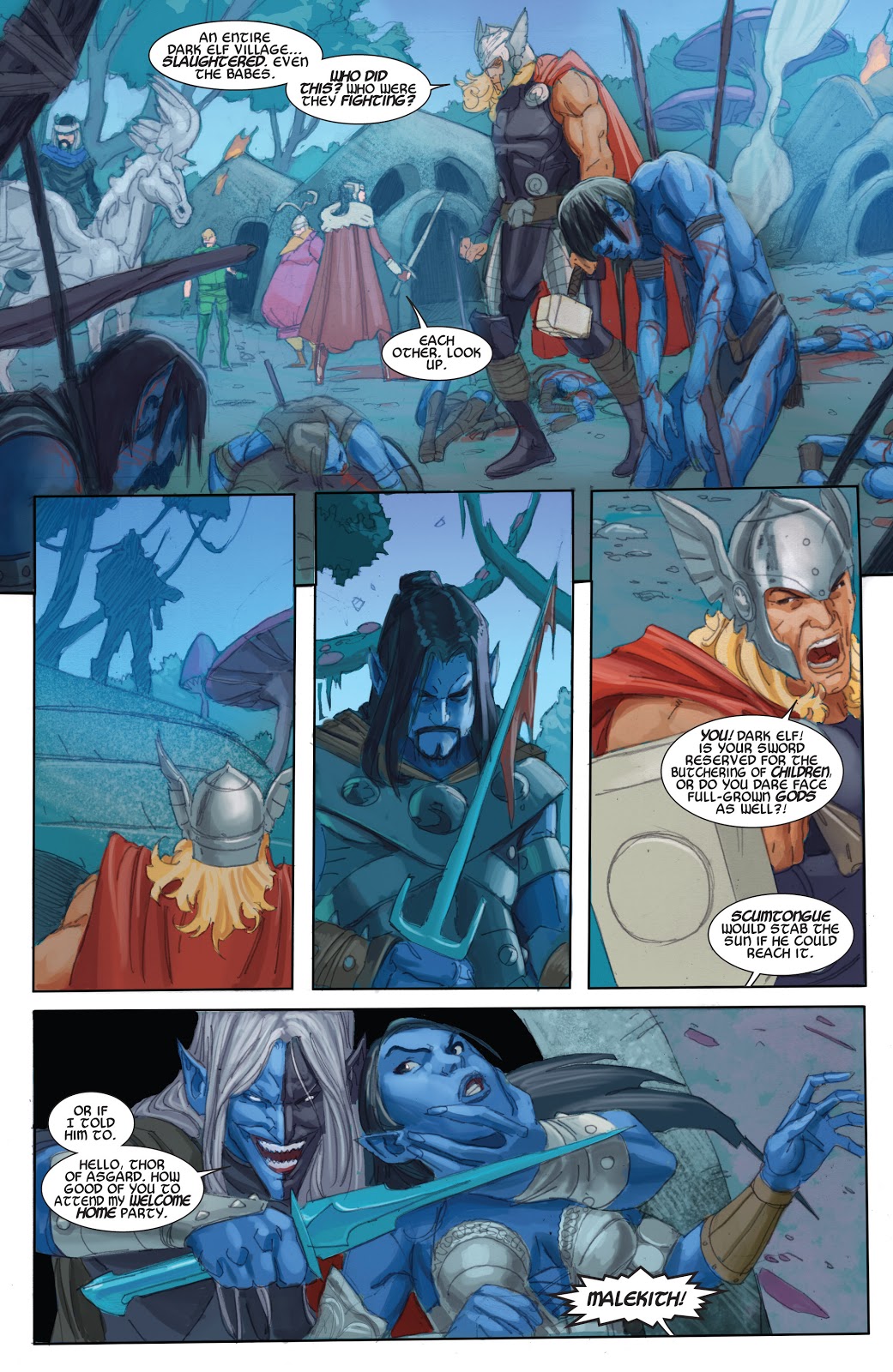 Jason Aaron set his stall out with one long epic story encompassing God of Thunder’s first two volumes, creative, imaginative and thrilling, but flawed. The Accursed is the real thing, avoiding any let down.

The title story reintroduces Malekith the Dark Elf, a relatively obscure Thor foe whose profile was raised by the second Thor movie in 2013. While he’d not always be centre stage over Aaron’s later Thor, his machinations would constantly affect Thor, and would culminate in The War of the Realms. It’s noticeable that Aaron fashions Thor far more around the movie version than he did in The God Butcher and Godbomb, reintroducing Asgardians seen in the film, and concepts used there also filter back into ‘The Accursed’. One is Asgard as but one of nine realms, with a tour taken around them and the differences between their inhabitants distinguished. This takes considerable dexterity on the part of artist Ron Garney, who creates viable environments for the different races ranging from the children’s storybook world of faeries to the harsh mining environment occupied by the dwarves. Garney’s always a solid artist, under-rated perhaps for the lack of flash, but everything needed is there on his pages.

Aason’s previous story lacked logic in several places, but this patches up all obvious loopholes. A trick is neatly explained without detail, and the lack of a united effort among the Dark Elves ending Malekith’s threat when he returned is explained by their being a fractious and divided people. The same might apply to the residents of the other worlds, but consider how the United Nations functions in ours. The wonder is when something can be agreed, as the expectation is that it can’t be. So it is with the Congress of Worlds, and Malekith exploits those divisions to rampage through the worlds. It’s a thriller elevated by the imaginative use of strange locations, the one on Earth being the best, and by perceived political expedience constantly trumping anyone’s best interests. We know Malekith’s going to be around for the long term, but the way this is achieved is still likely to take everyone by surprise.

‘The Accursed’ is bookended by a pair of single episodes, the first a touching run through Thor’s life on present-day Earth. Interestingly, Aaron makes a point of Thor’s interaction with representatives of Earth’s religions, as well as reintroducing the former love of his life. Now a doctor, Jane Foster is also afflicted with cancer, and her troubles will play out surprisingly over Aaron’s Thor. Nic Klein gives this story its necessary visual gravitas and joy. Completely different in tone, the closer looks back in on the younger Thor, kicking around the Faroe Islands in 894. Barrels of grog and a dragon aren’t a good mix, and Das Pastoras perhaps shows that too explicitly for some tastes. It’s a trivial, but nicely told tale switching mood very effectively, and while Pastoras has plenty of potential, enthusiasm and a great work ethic, he’s still a work in progress.

You’ll miss out on some fine Esad Ribić art, but this is probably a better place to begin reading Aaron’s Thor as there’s no disappointment. And Ribić is back for The Last Days of Midgard. That’s combined with this as the second volume of Thor God of Thunder. Alternatively, this is gathered with the first two volumes as Thor by Jason Aaron: The Complete Collection Vol. 1.