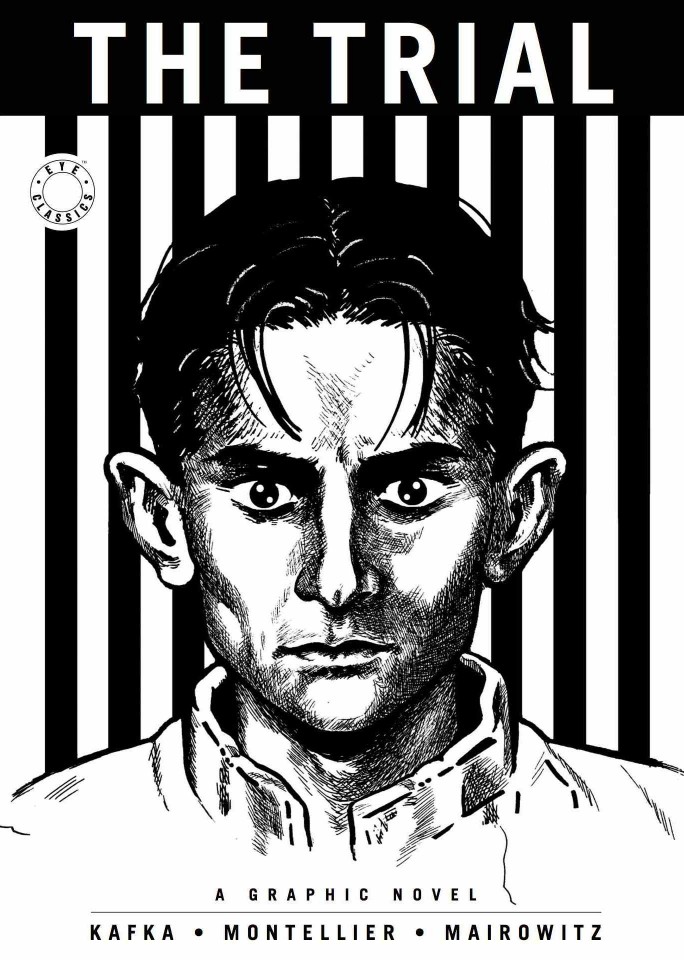 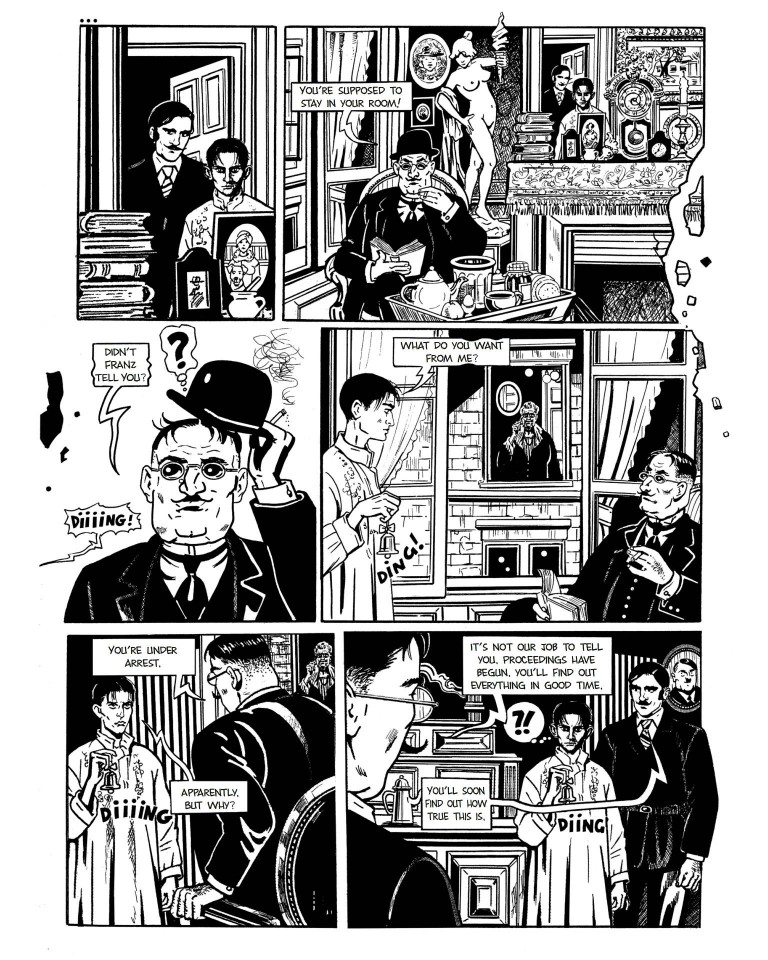 The Trial is a greater success than other literature David Zane Mairowitz has adapted for graphic novels. In Chantal Montellier he’s paired with a far more sympathetic and capable artist, the relative brevity of Franz Kafka’s original novel means less excising, and the lack of character and environment-based narrative feeds more fruitfully into a graphic novel.

One morning Joseph K awakens to find he’s under arrest, and is now accompanied by two suited guards, representatives of the system. They’re unable to tell him the crime for which he’s been arrested – indeed he never learns – and the trial of the title is perpetually on the horizon. He’s trapped in a bureaucratic limbo where every clarification obfuscates, every answer raises further questions and there’s no logic or consistency to proceedings. A tribunal is held in among cackling pensioners while copulation occurs in the background, a painter has inordinate influence within the system, and whoever Joseph K visits has some connection with his fate.

Montellier is very impressive, and has put far more thought into the process than the artists of SelfMadeHero’s other graphic novel literary adaptations. It utilises her fine art talents well, both in the page compositions and representing the confinement of Joseph K’s world. Her stark black and white art is bisected by an animated skeleton providing a visual commentary on the mood of a particular page. It sometimes extends to occupy the faces of other cast members, and along with malfunctioning clocks is a consistent motif. Other interesting visual effects serve specific purposes, such as a panel presenting a negative of its predecessor where someone’s said “no” to Joseph’s advances. Montellier references Robert Crumb in a deliberate meta-commentary, Crumb having illustrated a Kafka biography written by Mairowitz, and the supporting cast evolve from resembling comic archetypes in a silent movie to more sinister forms.

Part satire, and all nightmare, Joseph K is thrust from comfort to confusion within a labyrinthine world no-one can understand, yet one he ultimately submits to. Mairowitz conveys the neurotic tension adroitly, Kafka having provided an excess of capricious nonsense such as the shape of one’s lips determining innocence or guilt and conflicting opinions about women. While much of The Trial is open to interpretation and individual analysis, it’s also the work of Kafka’s that most obviously draws on his own circumstances. Montellier represents this via casting the best known picture of Kafka himself as Joseph K.

The adaptation is contextualised by an essay detailing Kafka’s life, and how elements of it are worked in into the novel. The best aspect of this adaptation compared with Mairowitz’s other work for SelfMadeHero is that it conveys why The Trial is such an influential and well regarded work of literature. While drinking from the source is always preferable, this at least reflects it fully.