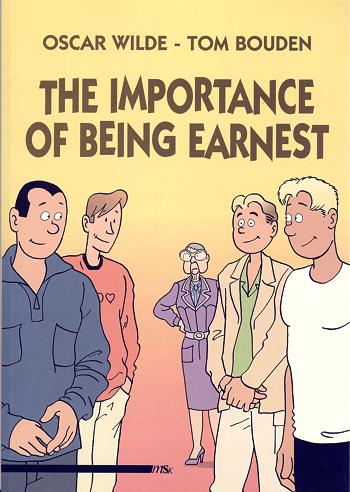 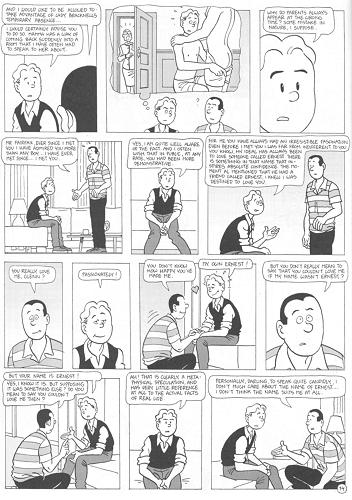 One of Oscar Wilde’s best known works, this comedy of manners has here been rewritten by Belgian artist Tom Bouden for an all-male cast and set in the present day.

At first, the nineteenth-century dialogue in this play might sound odd, but the reader should soon began to enjoy characters speaking with such clever abandon. In fact, it feels like one’s reading something happening in a parallel universe, where a man can declare his flame to a young man and the only thing preventing them from enjoying wedded bliss is his first name, which of course has to be Ernest.

Another characteristic of this adaptation is the high panel per page ratio used by Bouden to accommodate the text of the play–but it all flows well. Bouden has obviously tried to minimize talking heads panels, changing the scenery often, and having the characters express a lot with body language. In fact, he faced the same problems film adaptations of plays often face. No car pursuit, no explosion, no dead bodies… how do you grab the modern reader? Well, by giving the story and the dialogue enough room to breathe. Bouden achieves that beautifully.

His art style is decidedly Belgian, rooted in the Hergé and ligne claire tradition. With little rounded noses, street-level bodies, and varied faces, the characters look and behave like people one might meet at work or in a bar. His art is simply reader-friendly.

Bouden’s main success in this delightful work is the way he manages to put Wilde’s words in the mouths of contemporary people, without making them sound ridiculous or extremely snobbish. The effect is really refreshing, as if modern lovers – especially two men – could court each other with witticisms and aphorisms. The relationships between the characters of Wilde’s play are well preserved, although the parts of the ingénues are given to young men who seem more wordy than they appear at first sight. The men do not come off as predators, but rather as being truly, madly, deeply in love. One does not doubt for a moment that love will prevail, all that remains it to see how. The wedding with which the play ends (the graphic novel was created at the turn of the century)–a wedding between a man and a young man–seems perfectly obvious. We have to thank Tom Bouden for allowing us a glimpse of this other world, a world far gentler than the one we live in.

Readers interested in this graphic novel and living in Europe might want to head to the German publisher for a far lower price than at Amazon.