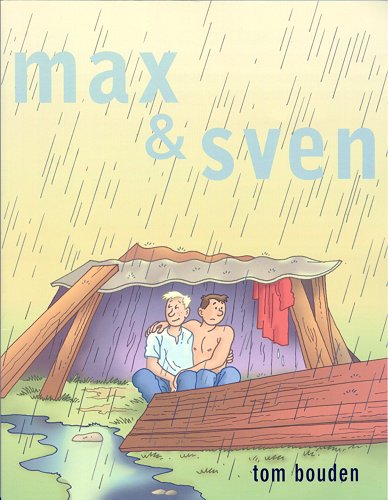 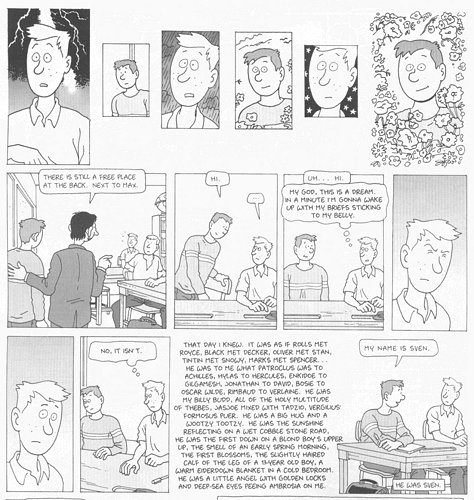 Tom Bouden has produced several well received European albums, but English translations have been slow in following. It was several years after his adaptation of The Importance of Being Earnest that Max & Sven appeared, a real-life, contemporary story of love and friendship. We follow Max through his teenage years, during which he meets Sven in high school and instantly falls in love with him, bringing the defining realisation that he’s gay.

The tone varies between realistic details (eight or nine year old Max having a crush on a boy he met during a vacation with his parents without even understanding it) and flights of fancy such as scenes showing Max’s boy scouts and boarding school fantasies. There’s also a lightness, a gentle humour, that differentiates this from all the other suffering gay teens stories. Bouden is Belgian, so maybe it’s  living in a northern European country at the end of the 20th century that enables access to a gay youth community without having to face homophobia. Another aspect of that European sensibility is the way sex is depicted. It’s a very natural inclusion, from Max trying on condoms by himself to his explicit fantasies. It’s not intended as usual pornography, in the sense that the story comes first and the sexually frank panels serve it.

It’s very important that Max and Sven’s friendship survives Max telling Sven of his feelings and the consequent discovery that those feelings are not mutual. Tom Bouden’s plot emphasises how people close to us have an influence on our lives, our loves and hopes. Loves and friendships are also on display in the second part of the book, with one or two-page strips often more whimsical than the main story. Sven, Max and Max’s lover feature in those strips, drawn between 1994 and 2001. They add a kind of post-scriptum to the main story, making Max and his friends feel even more real.

Max & Sven is the kind of graphic novel that should be in every high school, as much for the budding gay guys as for their hopefully open-minded friends.