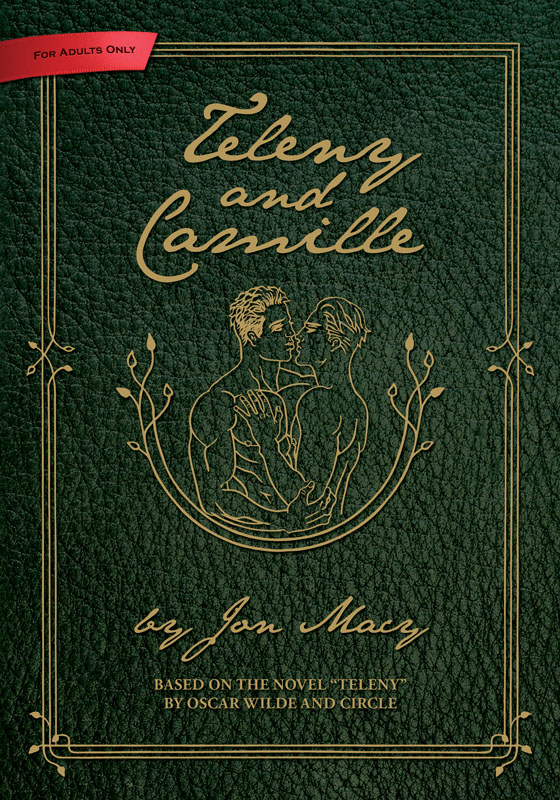 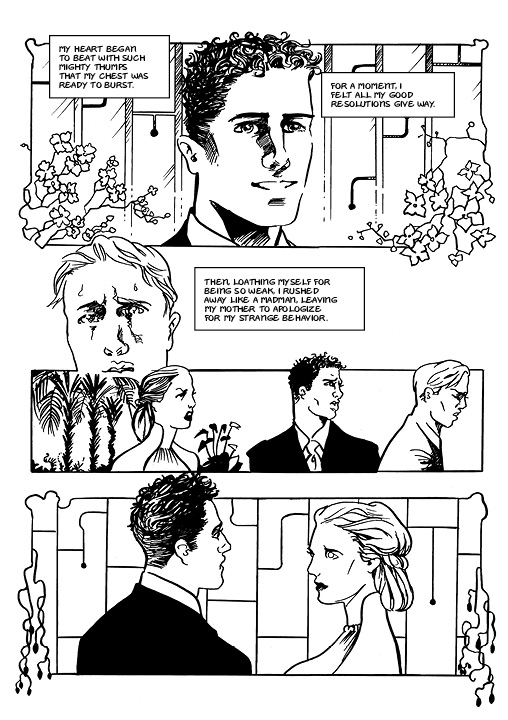 Teleny and Camille is an adaptation of a very special book. Originally published under the counter in 1893 due to Britain’s strong anti-gay laws, Teleny, or The Reverse of The Medal was a sexually explicit doomed love story attributed in parts to Oscar Wilde, who’d fall victim to the bigoted laws only two years later.

Camille Des Grieux, a member of the British high society, meets René Teleny at a charity concert where Teleny plays the piano. Something passes between the two men, but nothing happens. Camille is soon beset by visions, of exotic and long-ago lands, of Teleny standing naked while Sodom and Gomorrah are razed. Their relationship develops in fits and starts, with Camille trying to make sense of feelings new to him.

What Jon Macy has done with his graphic novel is impressive: adapting a work with such a weighty historical and sensual baggage is no small task, and he’s done so by creating visual narrations suited to the powerful prose, without shrinking from the less palatable aspects of the story, but also by acknowledging that this is a fiction, and more than that, a fantasy that was created in a specific culture for a specific audience.

Macy’s visuals are as lush as the writing. An almost expressionist use of blacks and whites, large variations in the styles used (from lightly sketched to fully realistic), layouts as illustrative as they are effective in portraying the emotions of the characters… Sex  and its representations do not hide behind the decadent aesthetics of the time but emerge from them, the XXth century truth behind the XIXth century veils of repression.

Macy hasn’t tried to brush the more shocking aspects of the novel under the carpet. He didn’t cut a gory sequence involving two (female) whores, a scene that’s probably as grotesque as anything Sade has written and which questions the view of women prevalent in the novel (see the collection of essays about Teleny here). Some readers might object to Macy adding his own epilogue to the original ending, one that is in keeping with the social mores of the times and thus doesn’t feel out of place at all. After all, Teleny is a fantasy, and what good is a fantasy if it can’t be tweaked to suit the desires and needs of its audience?

The idea of reclaiming 19th-century gay-themed works for a modern audience is rather attractive. The original works still exist to be read and enjoyed, while such an adaptation envisages what Wilde and others might have done had they been free to express themselves as gay men.

One might say that Teleny and Camille is a proof that there is an exception to every rule: while Wilde wrote that each man kills the thing he loves, Jon Macy has instead given new life to an old, beloved book that has a lot to offer to modern readers.