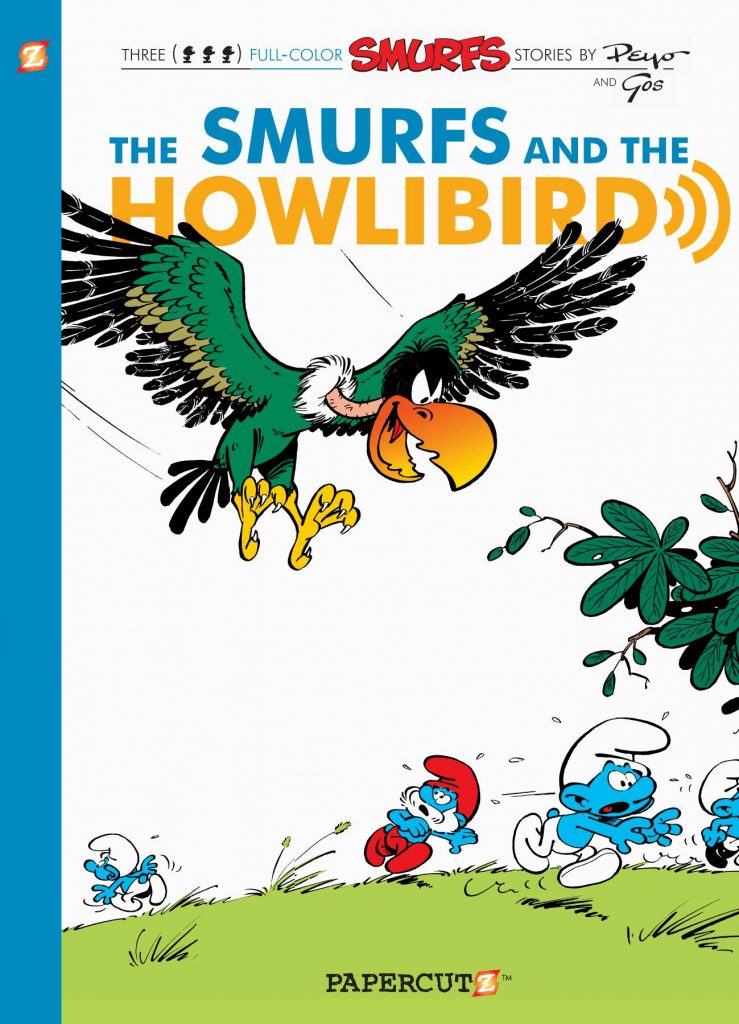 The Smurfs is an astoundingly inconsistent series. Peyo’s cartooning is always great, but the quality of the scripts varies considerably. When on song The Smurfs is a fantastic strip, but The Smurfs and the Howlibird is one of the lesser graphic novels. Although the cover notes this as a three story collection, it’s the title feature that occupies most of the book, with the other two stories between them only totalling nine pages.

That title story is the first Smurfs collaboration between Peyo and Raymond Goossand, generally credited as Gos, and accorded a biographical page at the back of the book. When you’re the size of a Smurf, many creatures that don’t bother humans can be a nuisance, and so it is with the Howlibird, yet it’s a menace of the Smurfs’ own devising. An extended opening gag sequence sees Papa Smurf develop a powerful new fertiliser, so potent that just a few drops result in rapid plant growth, but, crucially also create a carnivorous plant. Writing off the failed experiment, two Smurfs are told to dispose of the remainder in the desert. As that’s too far away, they throw it over a cliff, where the glass bottle breaks on some rocks and the remaining fluid drips into the open mouth of a chick in a nest. The next morning the Smurfs awaken to a devastated village and the imprint of two giant bird footprints. The Howlibird proves tenacious, hungry and particularly mean spirited as it terrorises the Smurfs.

Beginning with a strategic retreat, the remainder of the story is the embattled Smurfs concocting a series of plans to rid themselves of a menace. Gos’ script plays to Peyo’s artistic strengths by prioritising animation style gags, but no matter how well they’re drawn (very well indeed) it can’t disguise there being not an awful lot of plot. Scenes that in the better Smurfs books would rapidly pass on to the next gag are extended too far, resulting in a flat read.

Peyo’s far better on his own with ‘The Smurf Express’, in which a wooden train on rails is constructed to help the Smurfs transport food and other materials. This locosmurf has a charmingly rickety and home made look to it, and the bulk of the story becomes evil wizard Gargamel attempting to divert the railway and capture the Smurfs. It’s far faster paced than the title story, so packing in more gags, and coupled with the great cartooning it’s an inventively fun read. It’s the album highlight as the single page gag of ‘You Can’t Smurf in the Way of Progress’ is very laboured.

If you’d rather read the material at something nearer the European publication size, so far only the title story has made a collection, found in the third hardcover Smurfs Anthology. The Smurf Apprentice is next.