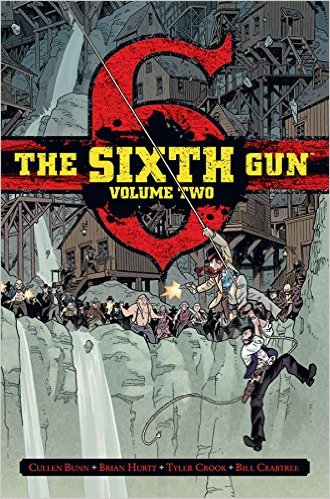 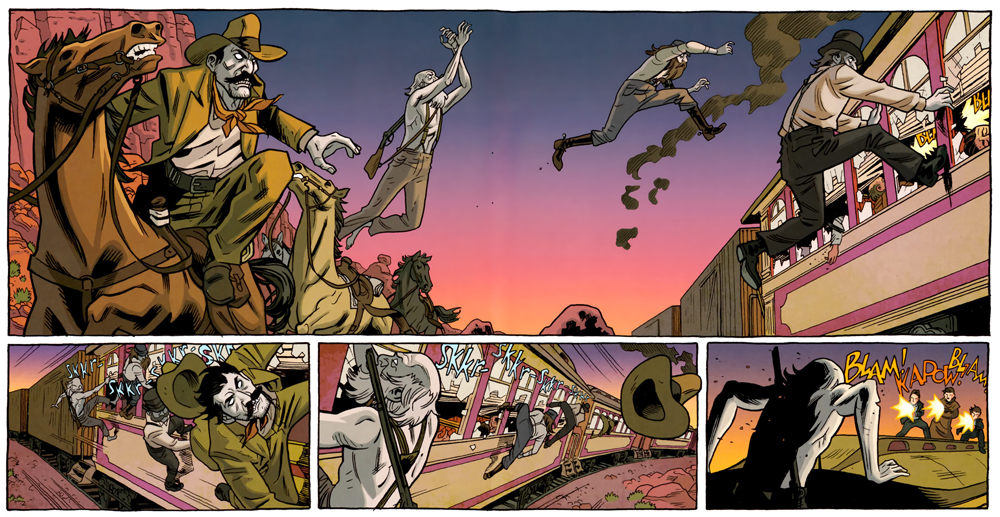 This second deluxe edition of The Sixth Gun, Cullen Bunn’s Weird West adventure, incorporates the story arcs ‘Bound’ and ‘A Town Called Penance’, allowing the creators to build on the arcane and enticing mythology introduced in the first collection. An exotic range of new characters and concepts  elevate the story to more epic and apocalyptic levels. Jeopardy is never far away, and the heroes must battle to keep the mystically powered weapons at the heart of the series from the hands of  enemies and allies alike. Allegiances are called into question as new and old dangers arise, and the burden of wielding the guns bites much deeper.

Once again, Becky Moncrieff serves the role of reader surrogate but she proves much more than a narrative vehicle. While still serving as the story’s moral compass, she is a character rapidly and satisfyingly evolving, growing from being a passenger in her own tale to an empowered warrior, challenging the inherent sexist nature of the historical setting. ‘A Town Called Penance’ sees her convincingly seizing control of her own fate and bonding further with her fellow gun bearer, Drake Sinclair. Sinclair too is given room to grow as he is forced to confront his dark past and begin his painful purification in the crucible of this story, a character treading the well-worn path to redemption. Each hero in The Sixth Gun is haunted by the past and by loss, none more so than the character of  Gord Cantrell, a former slave who is confronted by the ghosts of his tragic past in a literal sense. By deliberately separating  key characters for the bulk of the story, Bunn adds to the sense that he is patiently constructing his work like a chess game, each character  positioned carefully to play a key role in a grander plan and vision.

This book continues to  embrace and play about with western genre conventions. ‘Bound’ is built around a  train robbery. Bunn delights in subverting cliché here by stirring into the already heady mix revenants, zombies and the excellent Asher Cobb, a giant clairvoyant mummy with a surprisingly moving backstory. Cobb’s origin episode is pencilled by guest artist, Tyler Crook, best known for his work on Dark Horse’s B.P.R.D. Given the supernatural kinship between these two series, he proves to be a perfect, natural and welcome fit. This guest art compliments, rather than overshadowing the sterling work done by series artist, Brian Hurtt. Hurtt’s cartooning serves the series well, but his storytelling ability truly shines in one breathless, extended, dialogue free sequence that breathes vivid life into a rescue scene. It is both audacious and gripping, highlighting Hurtts’s skill at sequential storytelling.

Factor in ancient secret organisations, sorcerers, an inner cult within the historical Pinkerton Detective Agency, a town with a dark secret and guns with the power to reshape reality and you have a delicious concoction, the ingredients for a terrific fusion of western and supernatural traditions. The Sixth Gun has many great qualities but first and foremost the series proves to be tremendous fun.