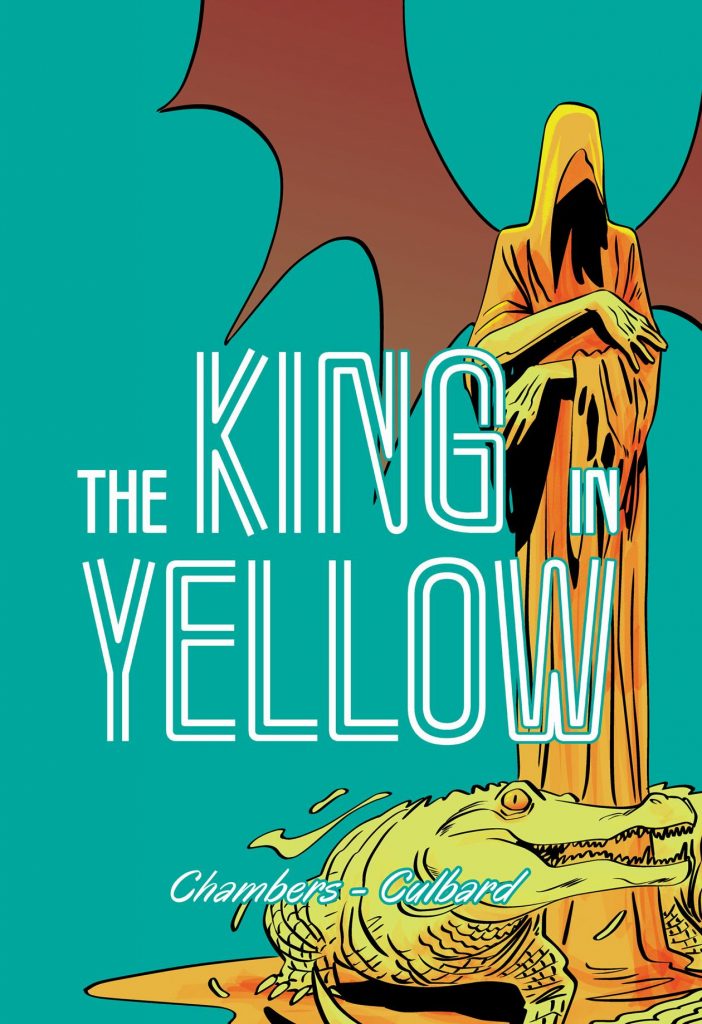 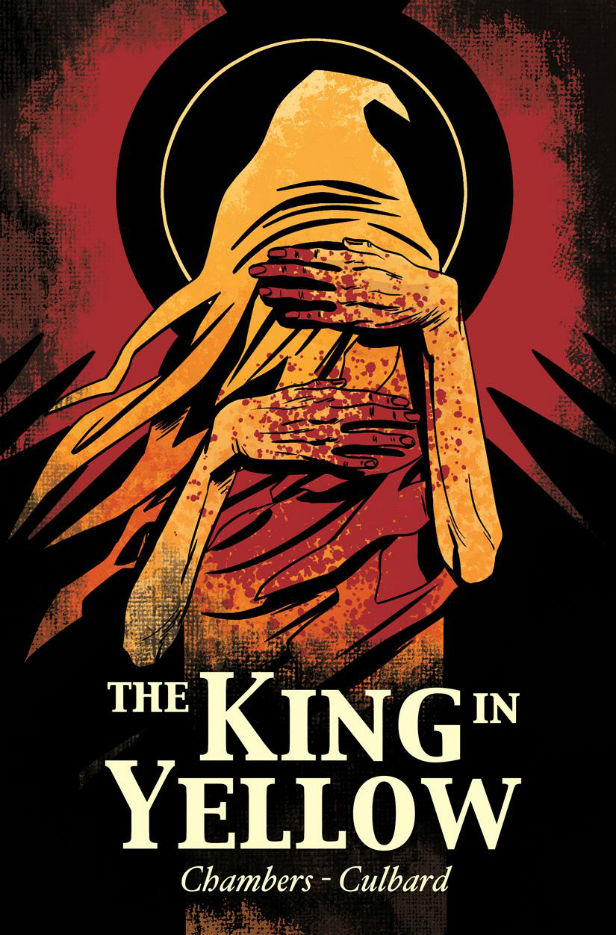 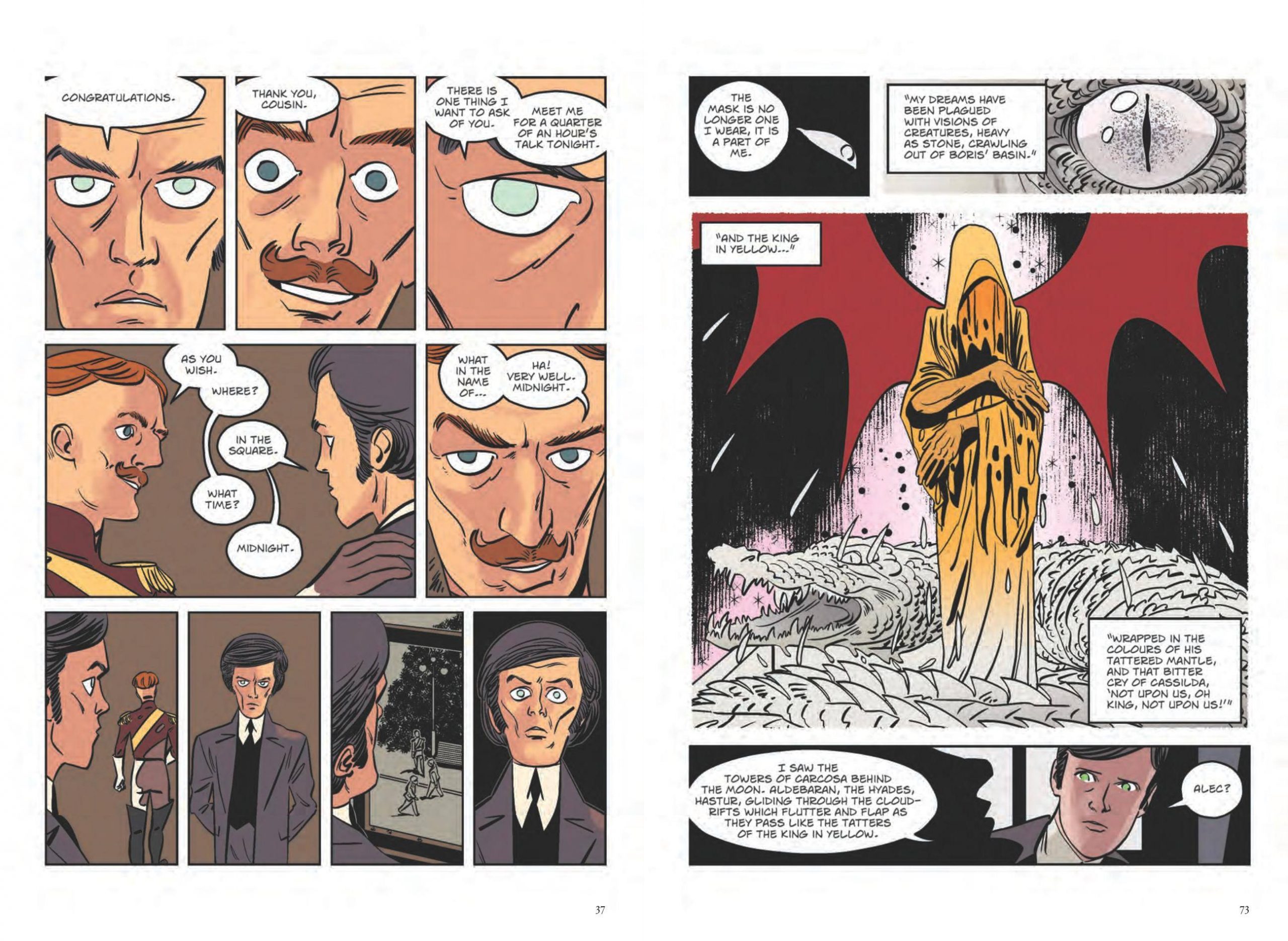 The King in Yellow is the best known work by American writer Robert W. Chambers. It’s a very imaginative collection of short, mysterious stories, four of them connected by a play supplying the title, mentioned in some while others allude to the title by different means, prominently the colour. During the more explicit mentions it’s noted that the play can induce madness in readers. These are clever stories, much admired by those who know them, and having several tidy adaptations of H. P. Lovercraft stories under his belt, I.N.J. Culbard delivers a polished and unsettling version.

Occupying a third of the book, ‘The Restorer of Reputations’ is a flying start. Chambers intends to sow doubt and mistrust among his readers, achieved from the start by setting the story in what was then the future, and in a USA different from that known in 1895. Culbard achieves the mood magnificently, his depiction of Halberd Castaigne, from whose viewpoint the story is told, staring-eyed and formidably intense. After falling from his horse four years previously he was treated for madness, yet others bolster his world of conspiracy and secrets, so where is truth?

It sets the table for the following three stories, where we automatically question the truth of what is being said, the second of them titled ‘The Mask’ increasing suspicion. Here Culbard accentuates the theme of captivity suggested by the story, the bars on an apartment window standing in for captivity of the heart, this symbolism extended by a perverse artistic process that preserves life, but forever frozen. It could perhaps have cut off a page before the end, letting readers join the dots instead of offering something out of tune with the more subtle tone otherwise applied. This is down to Chambers, not Culbard.

H. P. Lovecraft was very influenced by Chambers’ stories, and a dip into his world is most apparent in ‘The Yellow Sign’ where an artist and his model experience connected, disturbing dreams of the local church’s strange looking night watchman. This time Culbard is responsible for imposing a weaker ending, as he’s settled on the artist as a connecting device between the four stories. It necessitates the absence of the original ending with its memorably disturbing narrative cut dead mid-sentence.

Despite an alluring title, ‘In the Court of the Dragon’ is the weakest of the four stories, Jack now cast as the un-named narrator of Chambers’ original story. It’s a story that was surely commendably innovative for the era in presenting a supernatural horror, but is what it is with no explanation for the chase through Paris, and why Jack is terrified of the church organist.

The stories, especially ‘The Yellow King’, have been copiously appropriated by others over the decades, so Culbard making a few minor alternations is no bad thing, except the change to ‘The Yellow Sign’ to accommodate it. However, Culbard’s ending is appropriate in context, and only those who’ve read the original will quibble. He connects the four stories more explicitly than Chambers did, adding a few elements to achieve this, and really delivers with the art, which is sparse, yet visually stimulating. What’s available to him as an artist is showing the similarities between New York’s Washington Square Memorial and the Arc de Triomphe in Paris, and some distinctly creepy visual characterisation. If you enjoy a more subtle horror, The King in Yellow is highly recommended.