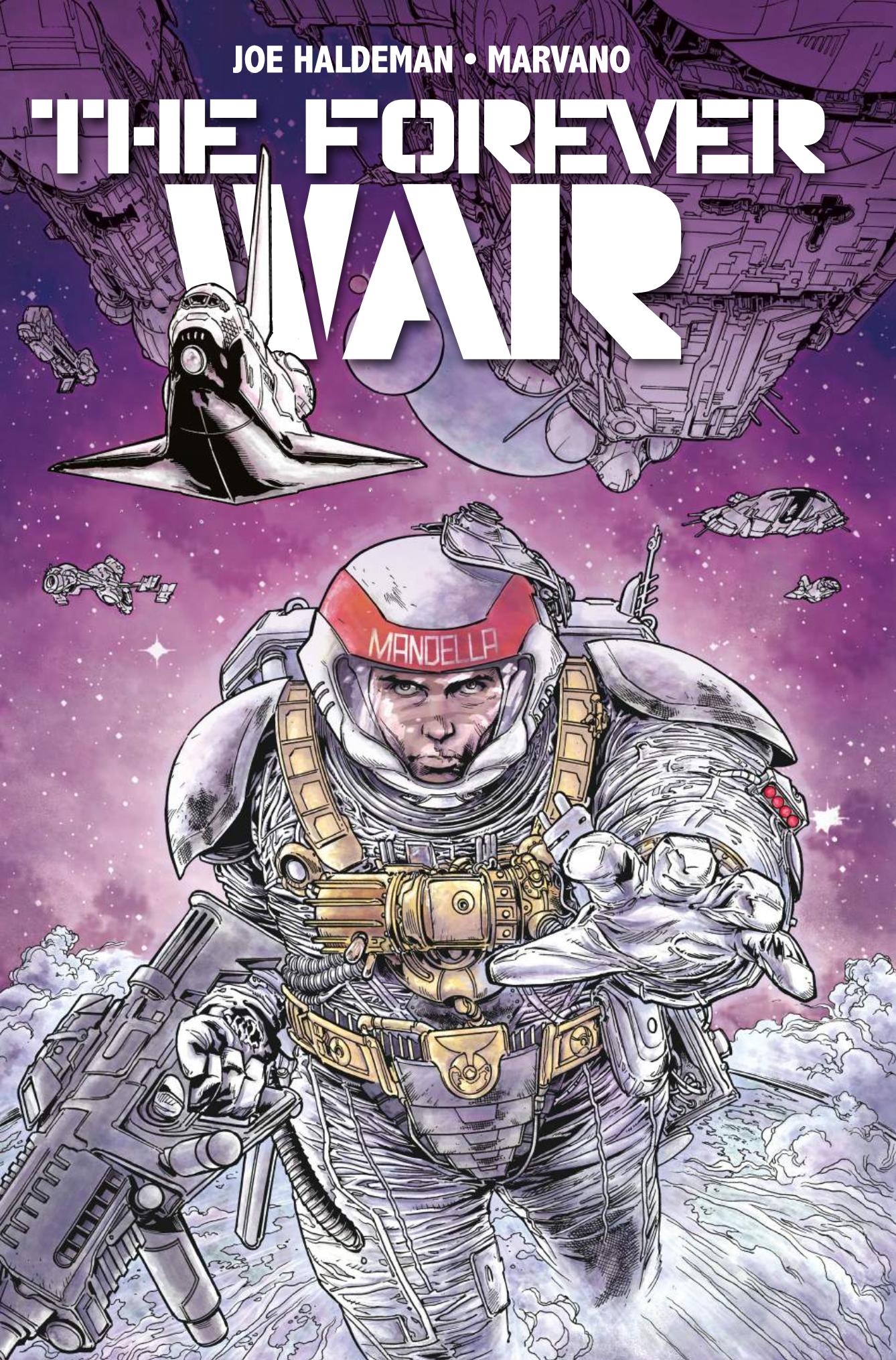 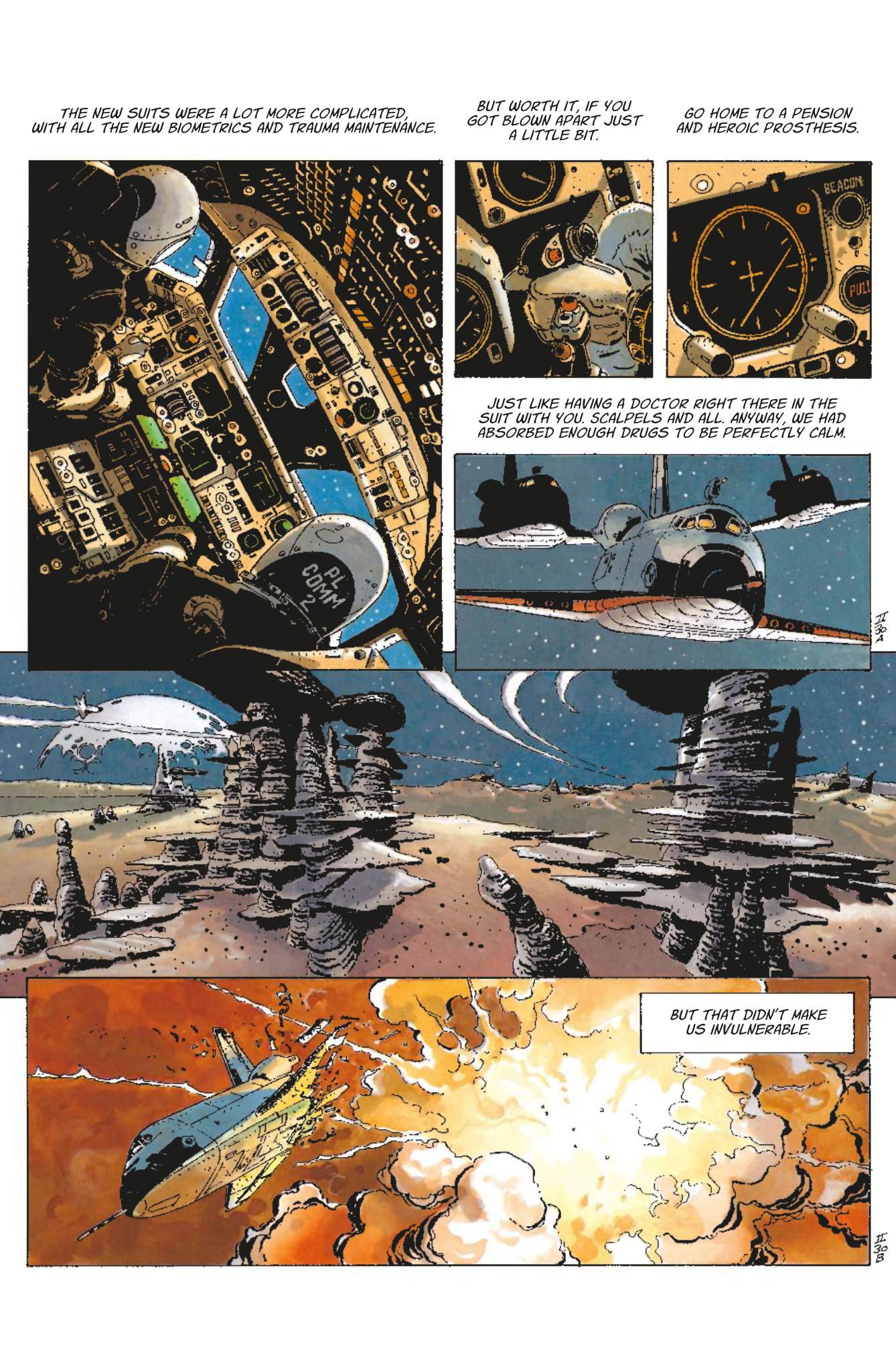 Having been unable to defer his own co-opted participation in the ideological dogma of the Vietnam War, Joe Haldeman served his time and then wrote an ultimately award winning novel slamming war and the military mindset. Unusually for the times, when Belgian comics creator Marvano (Marc Van Oppen) contacted Haldeman about adapting the story, Haldeman supplied the script. The result is this version of The Forever War, collecting the three English language volumes long out print.

The opening pages show William Mandella, his surname a near anagram of Haldeman, one of a hundred specifically selected troops being sent off planet for advanced training readying them to fight the Tauran enemy, rarely seen, yet continually demonised. Establishing the tone applied to military decisions throughout, three months of utterly lethal advanced training takes place on a planet with harsh cold temperatures, only for the surviving troops to be shipped out to a planet where the lowest temperature exceeds the highest recorded on Earth by twenty degrees. It’s not just via the blindness of the military mindset that Haldeman delivers his anti-war message. He emphasises the human cost. Mandella is an everyman pawn, but every person from his companies throughout the book is named, in the early stages given a face by Marvano to accentuate their humanity amid a bureaucracy that considers them numbers.

Marvano’s work is superb throughout. He’s an unusual artist for being equally strong when it comes to designing technology and depicting people. Although it’s a rare person other than Mandella who receives more than a couple of panels of stage time, everyone is unique, their personalities often defined in a single illustration. Marvano’s designs are astounding. They deliberately fly in the face of the smooth craft of the future we’re used to from TV shows and films, being awkward lumpy creations looking as if they’re designed by committee and compromise, which fits the tone of The Forever War. If there’s an element that dates the project, it’s the colouring, which would be far more sophisticated if done today, yet being faithful to the original, more limited choices, in its own way underlines Haldeman’s message.

Haldeman makes great use of a scientific principle that time passes at different rates according to the location in space, and from being 22 at the start of the story, Mandella is over 700 years old by the conclusion, the total extended by long periods in stasis. He becomes one of the few people to survive a direct encounter with the Taurans early, and the longest battle sequence occurs just before the end, preceding the inevitable finale. The entire book keeps humanity at the core by being entirely Mandella’s experiences, be they first hand or what he’s told, although the perception of what humanity is shifts extensively during the course of Mandella’s life. Haldeman makes some interesting points about gender identity and the desirability of cloning before the end also.

Thirty years on from publication of the first graphic novel, and over forty since the novel, The Forever War is still a powerful anti-war polemic, yet wouldn’t be so if there weren’t also a strong and compelling story to accompany the viewpoint. That the story is brilliantly drawn doesn’t hurt either. A masterpiece. A sequel, Forever Free, followed. 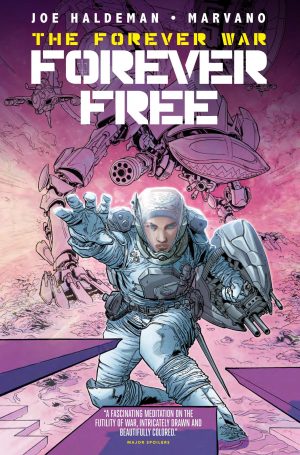