The Fixer and Other Stories 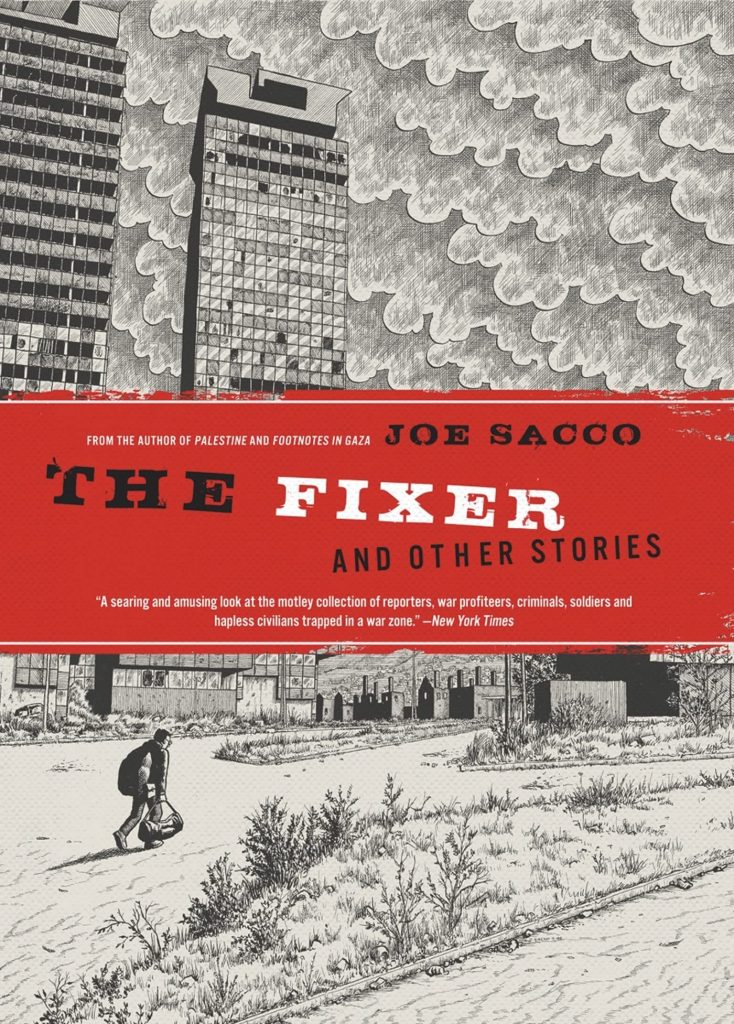 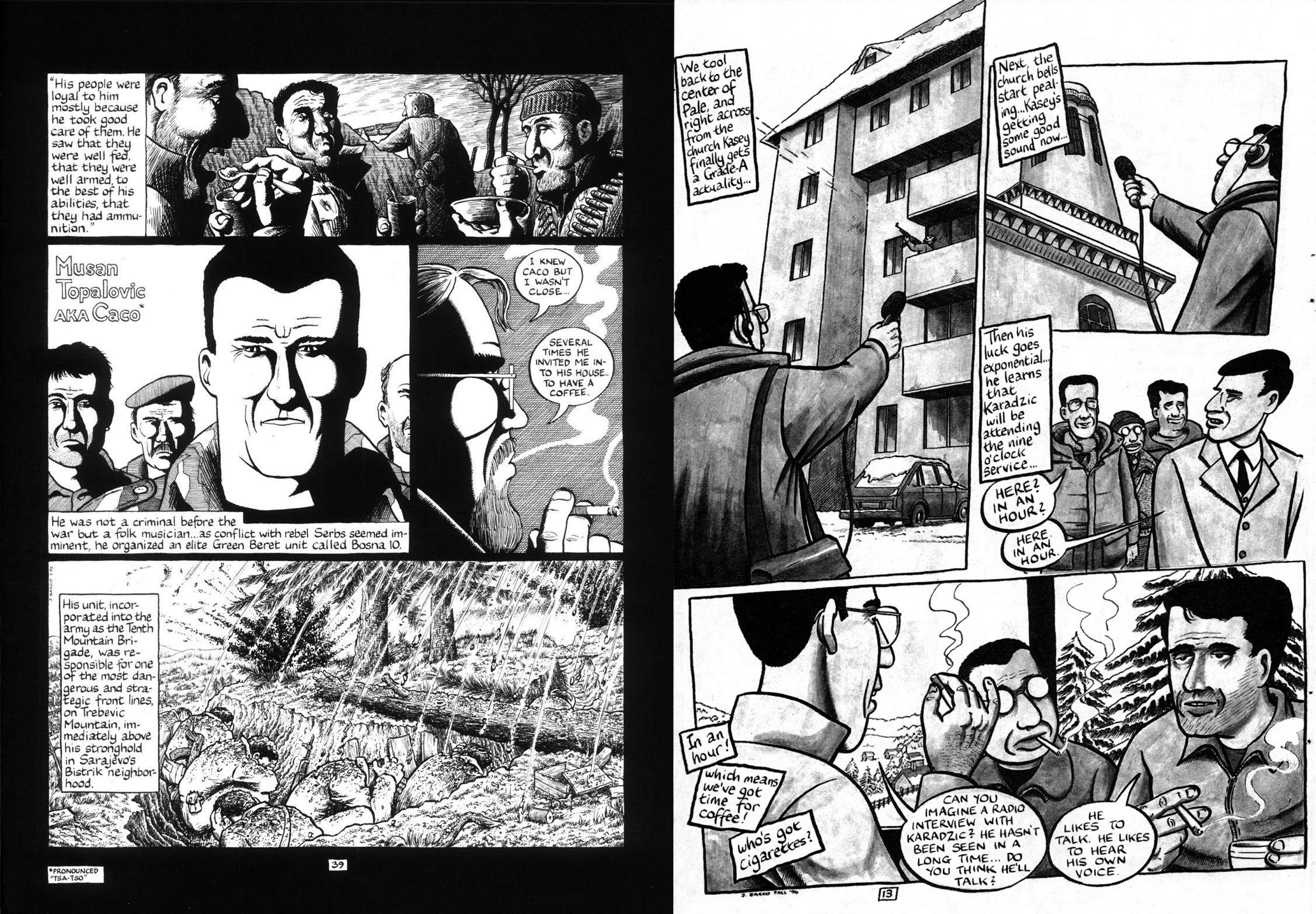 Safe Area Goražde remains Joe Sacco’s defining reportage on the 1990s war in Bosnia, an impressively weighty consideration, yet Goražde was not Sarajevo, the besieged city that impacted most on the wider world. Two stories about people in Sarajevo and a third about attempting to meet the leader of the Bosnian Serbs early in 1996 are supplied in this combination of what was previously issued as The Fixer and War’s End.

Both ‘The Fixer’ and ‘Šoba’ focus on personalities whose knowledge and activities tell a wider story. Neven stars in the first, a Bosnian Serb who remained in Sarajevo to fight with the resistance, but by 1995 earning his living by accompanying journalists, translating, explaining and making introductions. He’s haunting a hotel lobby for clients when Sacco arrives in Sarajevo, a complex mixture of sorrow and resentment, and while not everything he claims can be taken at face value, it’s undeniable that Neven has experienced much, and seen even more. Neven is the window into a besieged city where militias controlled by gangsters are sometimes all that stand between citizens and forces marshalled by Serbs under Radovan Karadžić. It’s a depressing account, the gangsters remaining true to character in exploiting and abusing those they protect, yet still the lesser of two evils.

Nebojša Šerić Šoba is an artist working in Sarajevo, and somewhat the local celebrity, yet someone who’s also served in the Bosnian resistance. He’s restless and easily bored, to the point where he volunteers to plant landmines in preference to the tedium of the trenches, and while telling his story Sacco explores the options for younger people in a besieged city. The centrepiece is an all-night party that no-one can leave, as a curfew is imposed. It’s briefer and not as shocking as Neven’s tale, but also poignant, and surely no-one else, in English at least, has so thoroughly documented life in Sarajevo under attack.

Sacco separates past from present via black-bordered pages, and supplies busy art packed with character, yet also glorious townscapes. Detail is key. It’s lovingly rendered whether beauty is the intention or the detritus of Neven’s apartment, the contrary art well represented by the rendering of the countryside trenches being shelled on the sample page. The same attention to detail applies to portraits, although falters slightly on the earliest and shortest of the three stories, where Karadžić’s features are stiff and awkward.

That strip considers the mundanity of evil, beginning with Sacco accompanying two other journalists attempting to track down Karadžić, who at the time was losing his power base. ‘Christmas With Karadžić’ occurs early in 1996 when those of the Greek Orthodox faith celebrate the festive season, and the horrific thread running through is Karadžić’s comment that Sarajevo will be counting the living, not the dead, once his forces are finished with the city.

Because comics was his chosen medium, it took the world too long to recognise Sacco’s worth, but these three stories show that in abundance. He comes across as Louis Theroux with a pencil, keeping his thoughts to himself as he mixes, observes and listens, then presenting a truth enabling readers to understand. It’s not comfort reading, but there’s an understated passion and dedication. 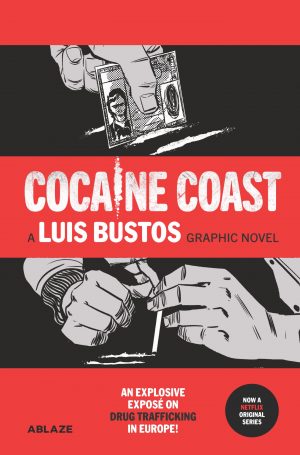 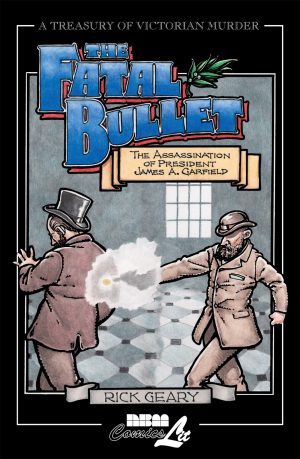 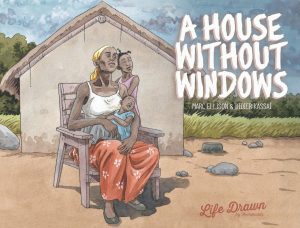