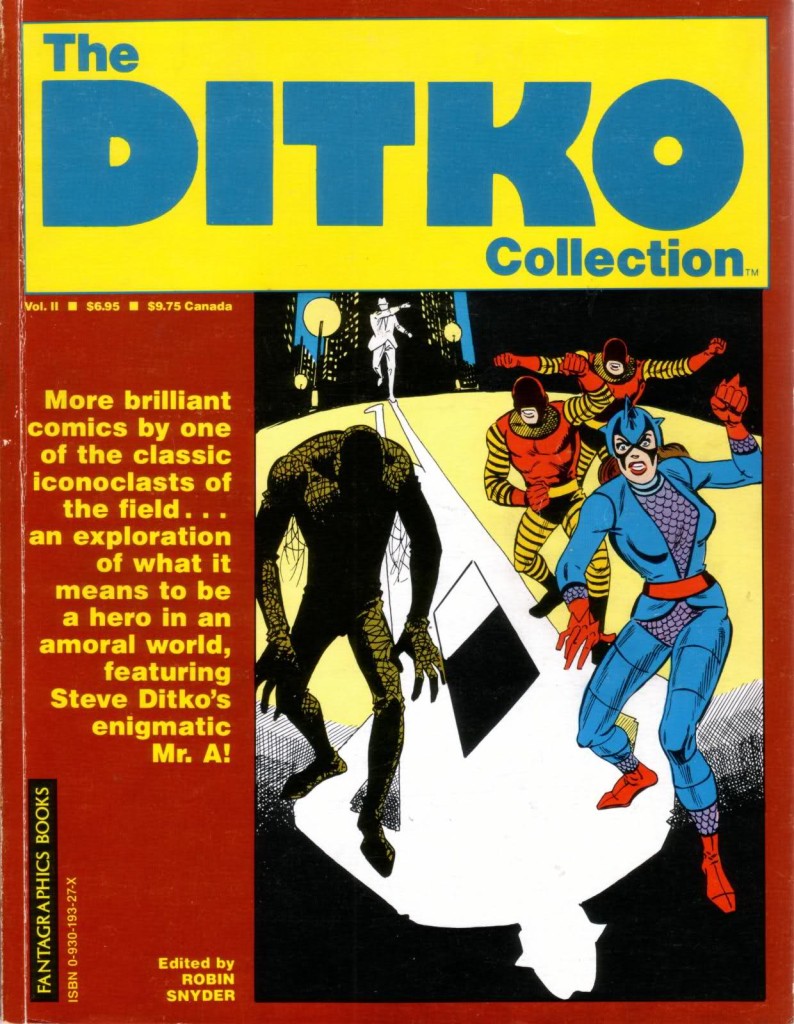 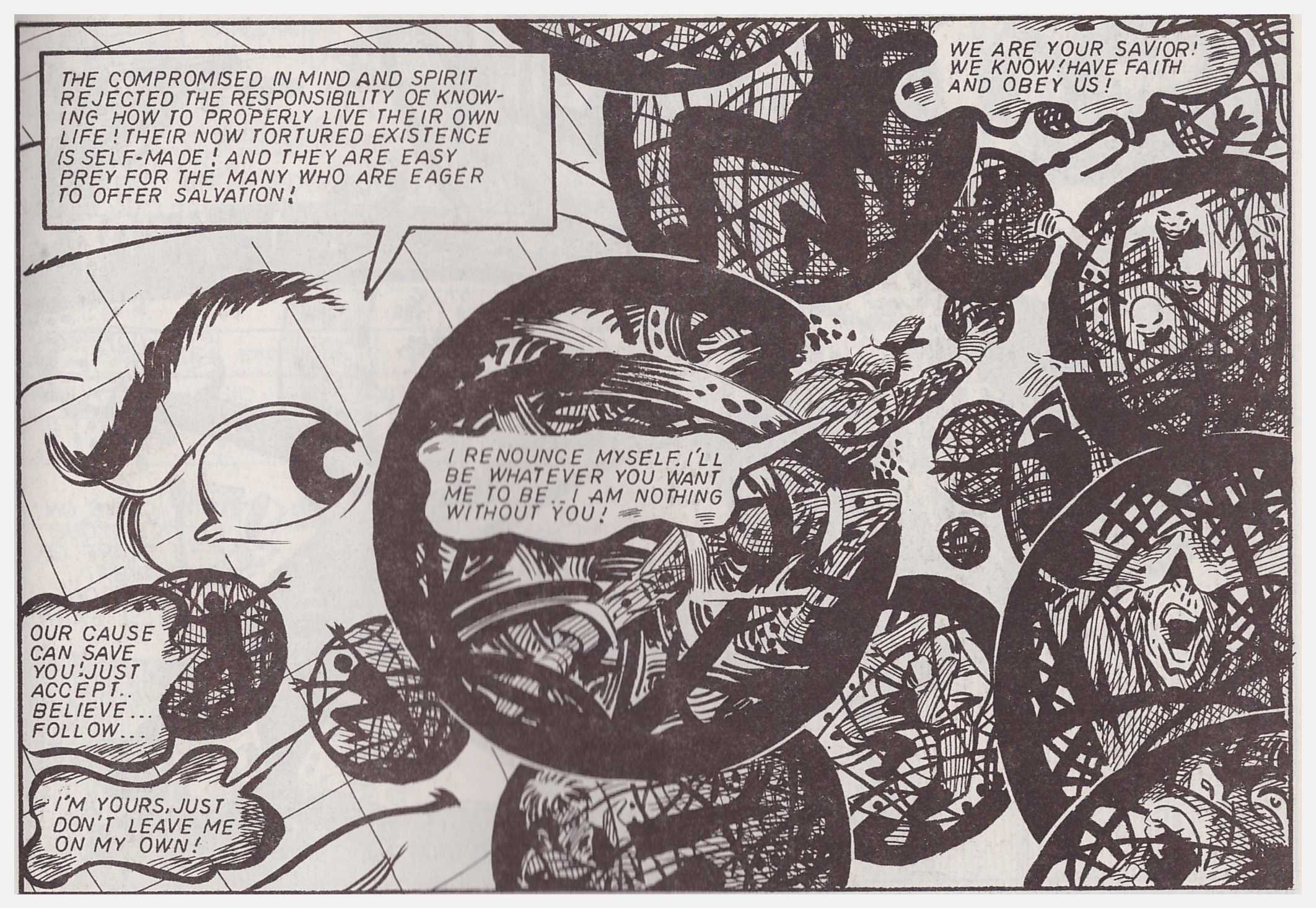 This 1980s collection opens with two Avenging World opinion pieces. An anthropomorphised globe with a bandage and a walking stick tells us that the world is damaged by “Some types of people and the stupidity they practice“. As well as predictable targets like politicians and businessmen, this includes Skeptical Intellectual, Middle Roader, and Humanitarian. The next part rails at compromise and ‘Collective Good’ – revealing Ditko’s fascination with controversial ‘Objectivist’ writer Ayn Rand. With long screeds of mechanical lettering, it’s a grind to read. Most people can probably find something to agree with (dictators are bad), and plenty to disagree with – choose your own, reader.

Artistically, Ditko works in symbolic imagery representing these concepts, and produces some arresting images. Often the lettering becomes part of the image – on page 20 a man is literally surrounded by ‘fear’, ‘doubt’ ‘confusion’ – it could be an evil spell from Dr Strange. The Avenging World wrap-around cover is classic Ditko and captures his views. On the left is a snarling angry mob, wearing hats of civil, religious and military authority, brandishing guns, knives, various Ditkoesque implements, and massive chains. On the right a calm, heroic individual hovers beside the Avenging World globe and an otherwise empty clean, futuristic city.

The rest of the book, at first glance, is typical 1970s mainstream comics, with costumed heroes Mr A, The Void, Masquerade, and more, but free from editorial constraints Ditko vents his worldview. In ‘Liberty or Death’ Liberty Agent battles the self-style ‘Chain’. It’s an obvious symbol of the Rand view of the collective trying to restrain the individual. Visually, it’s a nice Ditko action story, but he hits us over the head with his opinions.

In ‘The Screamer’ a back to nature sect who’ve reverted to animal skins and clubs, want to stop a building development. The mayor also wants to stop it to implement his own corrupt deal for the site. The Screamer acrobatically kicks people with no clear role in the story. It ends with everyone in hospital and a doctor saying “Thanks to technological and scientific progress you’ll soon all be back on your feet”. Yet Ditko doesn’t consider how the very definition of progress might be shaped by those same forces of greed and corruption he portrays.

The most extreme acting out of Ditko’s views is the vigilante Mr A, meting out his idea of justice in a white suit and homburg hat. He’s the inspiration for Rorshach from Watchmen and it’s hard to read this without remembering Moore’s exploration of the question “how does someone end up like that?” Ditko has no such subtlety.

Even those comfortable with Ditko’s worldview may still be turned off by his heavy-handed, hectoring approach. There are panels here three quarters of full of text – characters mouthing opinions. He seems to say: “don’t have trust in any leaders… except for me!”

In the 1980s this was a rare collection of Ditko work, and without the often poor colouring. The imaginative symbolism of ‘Avenging World’ includes drawings to compare with anything he’s done. The more traditional stories, are nicely rendered, and some of his best artwork from the 1970s. At times though, his distinctive style seems tired and over familiar, perhaps in the absence of engaging stories.

Fantagraphics are now systematically collecting Ditko’s work in deluxe editions, which may be a better bet than tracking down this rare item.