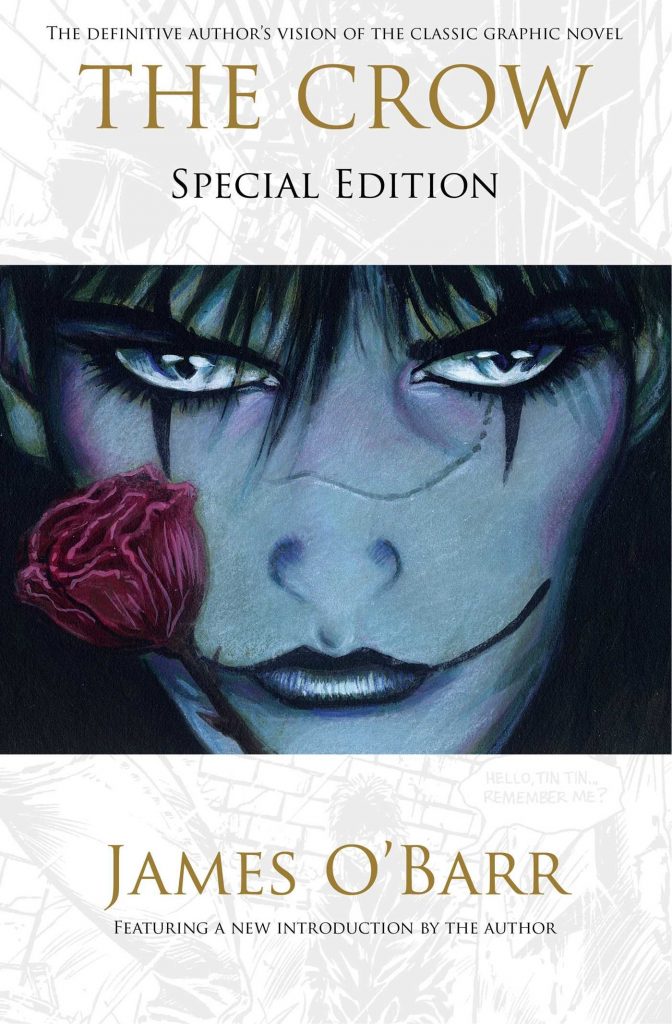 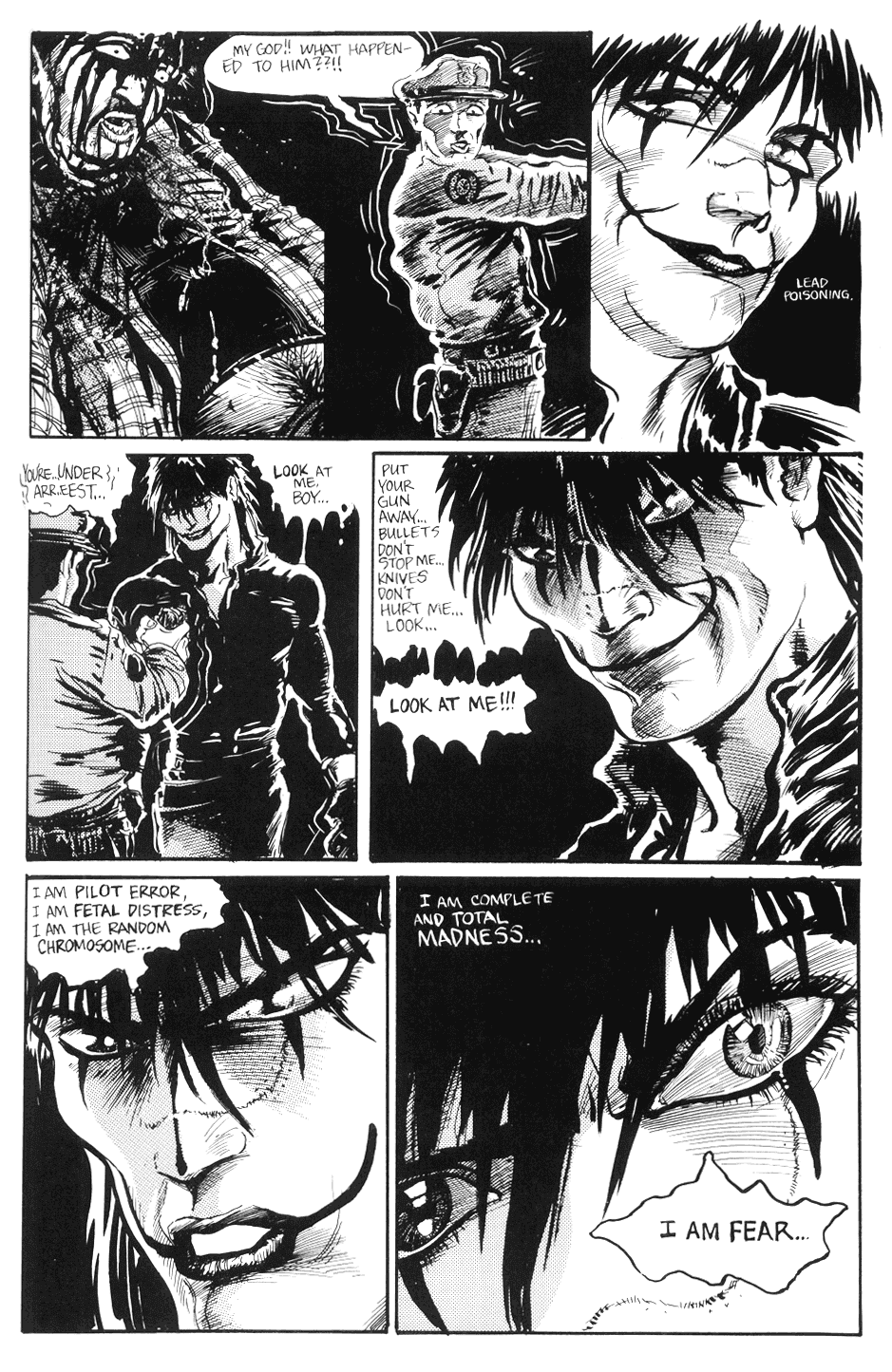 In 1989 troubled writer/artist named James O’Barr re-interpreted the classic plot of revenge from beyond the grave to create a media sensation. Produced as an inspired form of art therapy following the killing of his lover by a drunk driver, O’Barr’s cathartic and emotive spirit of revenge debuted in 1989, but The Crow wasn’t combined into a graphic novel (with added material) until 1993.

This remastered Special Edition is a Director’s Cut restoring much intended material dropped during the original run due to space considerations, cost and, as stated in the author’s introduction, O’Barr’s then-lack of ability and “limited visual vocabulary”.

‘Book One: Lament’ opens with a leather-clad Goth/clown extracting information from a very nasty street thug, after which ‘Shattered in the Head’, rendered in grey tones and washes, follows a tragic young man on a very special train seeing something truly horrific. ‘Book One’ proper describes ‘Pain’, as a melancholy figure prowls an empty, desolate house before going hunting. Five names resound in his head. When confronted in ‘New Dawn Fades’ Tin Tin doesn’t even remember the clown with the crow on his shoulder.

Intercut with flashes of a grievous crime and atrocity inflicted on a loving young couple, the drama proceeds with ‘Shadowplay’ as rising criminal star Top Dollar receives a visitor who decimates his gang before ‘The Kill’. The vengeance taker is plagued by memories of his lost, perfect life in ‘The Anti-Architect Dreams’ before proceeding ‘…Like a Concave Scream’ with his hell-bent mission.

Second book ‘Fear’ briefly focuses on sadistic scumbag Tom Tom in ‘Dead Souls’. When he was alive the sensitive soul was called Eric, and makes a slight detour in ‘Submission’ to reclaim the engagement ring taken from his ravaged love’s dead finger. He makes a police ally and continues his death march in ‘Elegy: Irony & Despair’.

Another tender memory racks his conscience in ‘Atmosphere’ and the agonised angel finds time to save a little girl’s future in ‘Velocity’. Then drug addicted, pain-immune Fun Boy is sent a message and becomes a living example for the remaining targets before a further inkling into the role of the ever-present Crow in ‘Watching Forever’.

‘Book Three: Irony’ hints at the coming conclusion in ‘Immolation’ as Eric destroys the massed street-gangs employed by the harried targets as a final warning before some mysteries are revealed in a harrowing flashback ‘The Atrocity Exhibition: One Year Ago’ opens ‘Book Four: Despair’. Closely following is the secret of Eric’s “survival” in ‘Head Trauma’ leading to the inescapable ‘Crescendo’. The largest new segment ‘An August Noel’ precedes the beginning of the end and in ‘Angel, All Fire’ Eric makes his peace with life and dances one last ghastly pavane to his lost past before setting out for a gruesome ‘Hammer Party’.

‘Book Five: Death’ starts the final confrontation with last target T-Bird in ‘Gravity’ and, as another army of society’s worst dregs get in Eric’s way his bloody ‘Attrition’ elicits some human response from the unrepentant monster. With bodies falling like red rain ‘Looking Down the Cross’ sees Eric become an unstoppable slaughter machine and ‘Steel Tide on an Asphalt Beach’ has the campaign of vengeance conclude the only way it could. After the denouement, a new postscript ‘Sparkle Horse’ offers some long-needed healing to augment the gory closure before order is restored in the elegiac ‘Passover’ and ‘Coda’.

Epic, simplistic, poetic and powerfully moving, this darkly uncompromising tale is a monolith of modern comics and this stellar compilation is the only way to truly experience it in all its gothic glory. 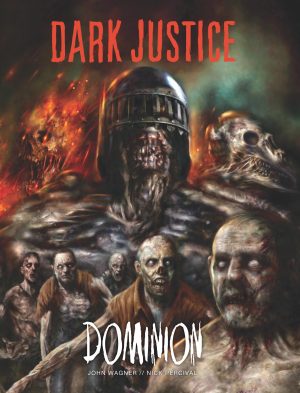 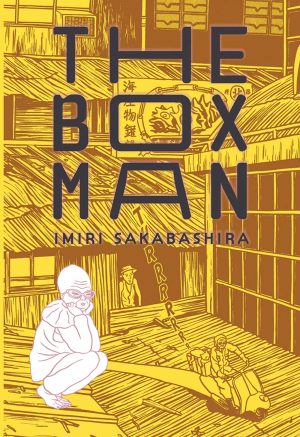