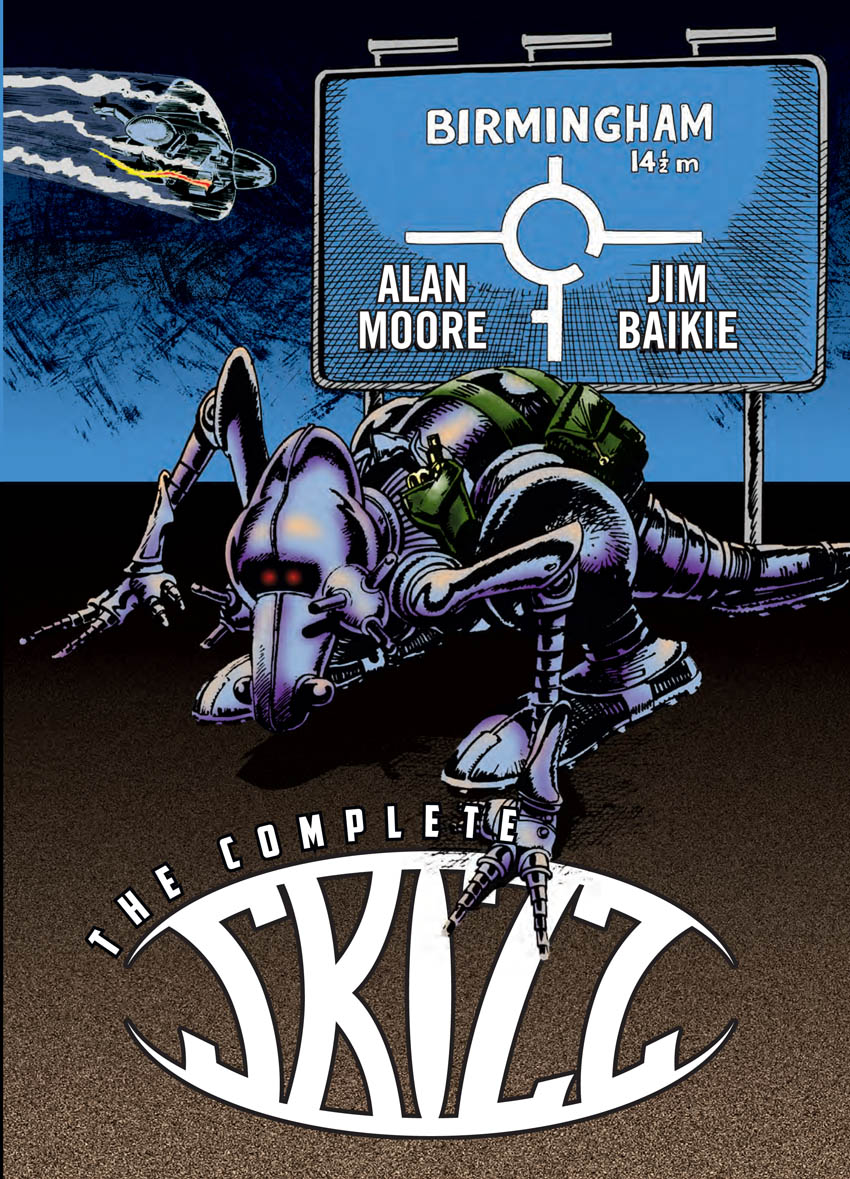 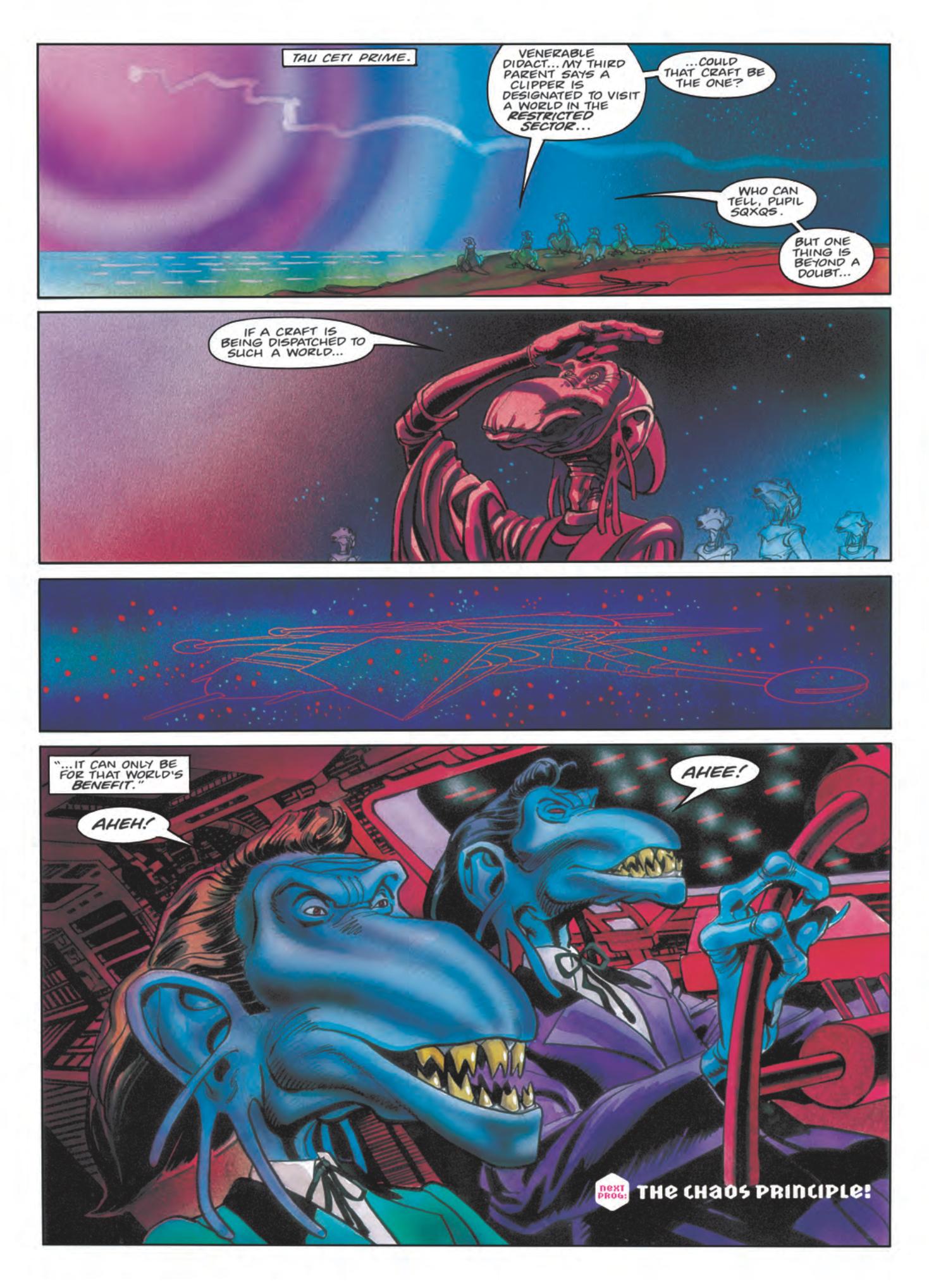 It was the editorial staff at 2000AD who suggested a strip about an alien stranded on Earth, fully aware E.T. was due for release in the summer of 1982, but there the similarities end. In the first of three stories collected here, Alan Moore landed Skizz in England’s run down second city of Birmingham, and in what was a departure for 2000AD at the time, Moore introduced a teenage girl, Roxy O’Rourke, as the primary supporting character.

Skizz wants to return home from a backwater planet lacking the technology for him to do so, while sinister government forces set about capturing an alien in their midst. Moore emphasises the urban poverty as Roxy is joined by Loz, and their mate Cornelius, unemployed and not the same since his industrial accident, and everything is accentuated by the elegance of Jim Baikie’s art. Compare it to his work elsewhere, and while he’s always professional, he’s rarely enjoyed anything as much as Skizz, pouring in the detail and personality, readily delivering the run down social conditions required, yet when Skizz’s homeworld is featured, Baikie’s pages are suitably exotic. Skizz is never going to rank among Moore’s major works, but it’s tidily plotted, well drawn, packs a lot into four page episodes and still entertains.

Nine years after the first story Baikie both wrote and drew a sequel, providing the clever title of ‘Alien Cultures’ for a plot sparked by the yogurt Skizz ate while on Earth. He uses characters and devices initiated by Moore such as Skizz’s comical alternative pronunciations, but the plot is definitively his. Skizz has been quarantined as a danger to his people, with confinement a theme running throughout a plot that switches between Skizz and supporting characters on Earth.

Baikie’s writing lacks the little extra touches Moore supplied, but as they’re window dressing, that’s not an issue, and Baikie’s ideas are more than strong enough to carry a sequel nearly matching the original. His art, however, while still strong on visual characterisation, lacks the detail of the previous tale. Longer reviews of both can be found following links to Skizz and Skizz II.

While both earlier Skizz stories were issued as graphic novels, the compelling reason to buy this is Baikie’s second Skizz tale, never published in book form. ‘The Gunlords of Omega-Ceti’ occurs fifty years since the events of Alien Cultures. It takes its cue from the conclusion to that story, with a ruling body attempting to change history. They dispatch two thugs who consider they’ll fit in on Earth by dressing as teddy boys and driving a red Volkswagen Beetle. As for the human cast, some have mysteriously stopped ageing, while others are on their last legs. Skizz isn’t doing too well either.

Baikie’s art is again more detailed, and the skills applied to his previous story bear repeating. He ups the comedy with the pair of farcical assassins and their journey through time, and undertakes a greater exploration of the society Skizz lives in, its protocols, technology and enemies. He comes up with some surprising explanations for what he’s set in motion and his new characters are memorable. Trevor and Wayne are in the tradition of incompetent buddies, and would strike a chord with 2000AD readers who remembered D.R. and Quinch when this was originally serialised, and wait until you see the changed Roxy O’Rourke. The Earth setting transfers to the Australian outback, and Baikie drops in some great diversions and a really unexpected guest star. It’s a lot of fun and leaves some matters open for another story that never materialised.