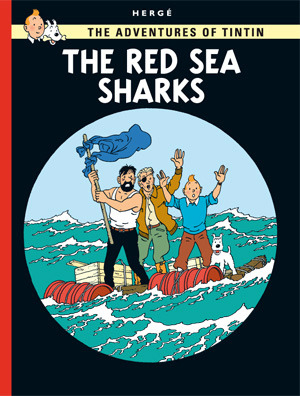 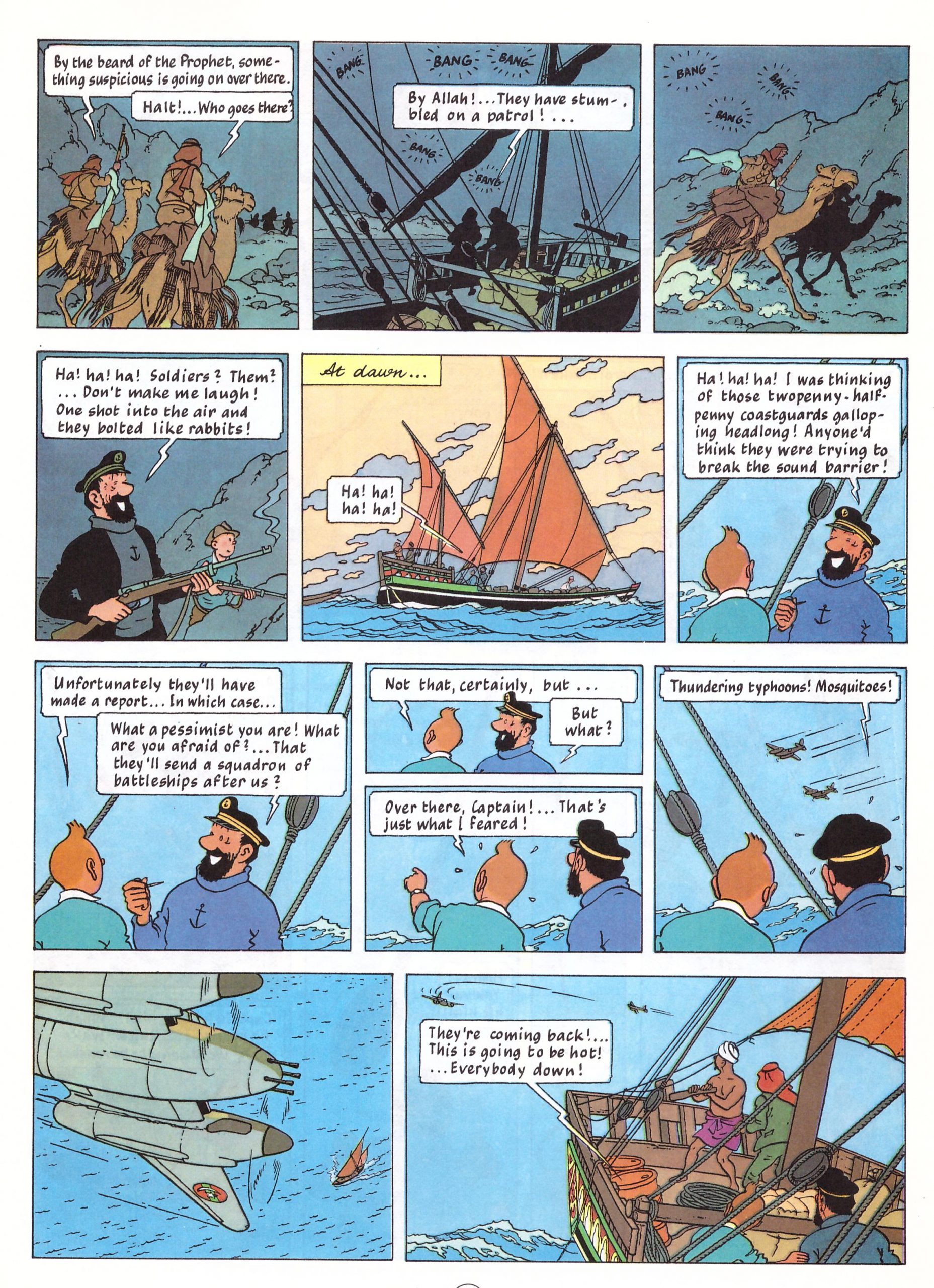 The title of The Red Sea Sharks is a play on words, much like the original French title, Coke En Stock (“Coke on Board”), which referred to the traffickers’ codename for slaves – coke (that’s coal rather than cocaine or cola). Actual Red Sea sharks are seen, but the more exciting English title refers instead to slave traders.

In many ways this book is a continuation of Land of Black Gold, and it’s a family reunion, with Hergé utilising thirteen characters (excluding Tintin, Captain Haddock and Snowy) from earlier adventures. Although Tintin is a globetrotter beyond compare, he does seem to live in a small world, forever meeting old friends, and old enemies. It is one such incident – they literally bump into an old acquaintance in the street – that is the catalyst for this adventure. A dropped wallet, an attempt to trace its owner, and our intrepid heroes are soon embroiled in a battle of wits with arms dealers.

To make matters worse, Emir Mohammed Ben Kalish Ezab (from Land of Black Gold) has sent his son to stay with Tintin and Haddock at Marlinspike Hall. They soon discover why – the Emir has been deposed and imprisoned. It isn’t long before our heroes decide to go help their friend out of his jam. This isn’t altruism, they’re just being driven to distraction by young Abdullah’s constant pranks, and it’s plain to see Hergé drawing parallels with countries allying themselves with questionable regimes to suit their own ends. As if crooked arms dealers and a Middle East coup weren’t enough, soon Tintin and Haddock find themselves taking on slave traders too.

Like most Tintin books the plot is an extended chase sequence, over land and sea, involving a large number of boats, planes, armoured cars, submarines and vehicles of every description. However, this isn’t a criticism, and the book is a masterful example of the oeuvre. Hergé and his assistants could almost do no wrong at this stage, and the book is superb, with top-class artwork married to a plot that’s as well-paced as it is dramatic. And it’s more grounded in reality than the previous adventure, The Calculus Affair. While wordy, it avoids large blocks of exposition, and uses humour expertly to lighten a tale about a very mature subject.

Hergé had hoped to deal with accusations of racism that followed publication of the far older Tintin in the Congo in book form, and attempted to redress the balance with this adventure. However, it didn’t quite work out that way, and the depiction of Africans speaking pidgin English offended some critics. He amended the relevant scenes for later editions. Given slavery as the subject matter, it’s difficult to square that (and Hergé’s constant championing of the underdog) with any notion that he was a racist. Although he was unsophisticated when he produced the earliest books.

This book, and its surplus of characters, has been described as Hergé clearing house before embarking on the stripped-down, and much more personal Tintin in Tibet. The large cast means that some get short shrift, most notably Thomson and Thompson, who only appear briefly. With Haddock along for the ride, there’s less need for the clueless detectives and their broad slapstick. Accidents befall the unfortunate seaman on almost every page, and it’s little wonder that he drinks. And it is to Haddock, irascible, often foolish but never less than totally lovable, that the book belongs.