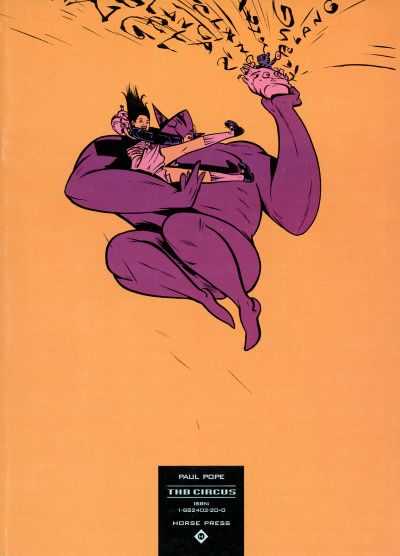 In the 1990s Paul Pope took his comic work seriously. If convincing is needed just read his rambling five page essay opening THB Circus, considering his work ethic, a friend’s house being robbed, Indian dinners, his mate Xiaomin, and a dream of washing a girl’s feet among other topics. It’s extremely self-referential, with the self-awareness off the scale, yet there’s also an honesty about a creator emptying his mind like this.

With several self-published comics and graphic novels already under his belt by 1998, Pope experimented with form as well as content, and THB Circus is an interesting looking, treasury sized publication combining two different paper stocks, under thin paper covers. Beyond the essay and before the story starts there’s a background article and glossary of terms pertaining to his self-enclosed universe, and despite Pope warning us that the content is “pop”, a weight of expectation is further inflated. It’s not met by the stories that follow unless someone is already sold on Pope’s admirably unique vision.

The selection of connected short stories are inventive, and the background to them has been considered, but the whimsy isn’t going to suit all tastes. Most concern the HR and her friends Kendal and Lollie, the teenage daughters of rich families sent to an exclusive school. Lollie is obsessed with taking pictures of gangsters, feared for kidnapping her kind for ransom, but she’s protected by THB, the technological equivalent of an instantly forming giant naked purple superhero. It’s a more intelligent Hulk, if you will. Pope was ahead of the game in being influenced not just by Japanese adventure comics, but the wider spectrum of manga, obvious in the longest single story of HR having to bake a birthday cake and transport it across town while the circus parade is on. It’s very much the Taskmaster task, setting up failure.

It’s Pope’s art that the most seductive aspect of THB Circus, providing a reason to turn the page even if the fate of the birthday cake is of zero concern. That art is experimental, yet consistently interesting, whether it’s a full page taking advantage of the large size to impress by having THB leaping toward an area of town from some distance above, or the busy trappings of a circus. Design is a strength throughout, from distinctively masked, wacky and ineffective investigators in fur coats to straggly retro robots. People are good also, the girls adventurous and innocent, the villains sweaty and sleazy, all in a loose, expressive style.

Because Pope thinks about his comics so much, and is very design influenced, it could be a deliberate tying in with the pulp paper printing, an aesthetic connection, that some art and lettering disappears into the binding. Or it could be a production mistake.

While always interesting, Pope isn’t always compelling, and that difference is likely to restrict the commercial appeal of what’s within a thoughtfully designed package.