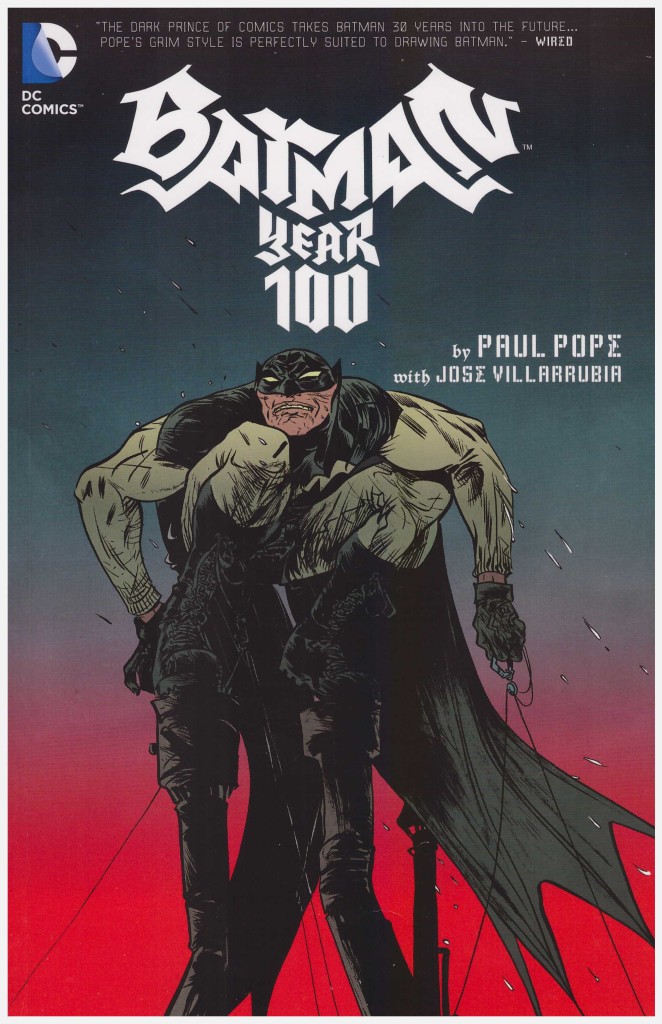 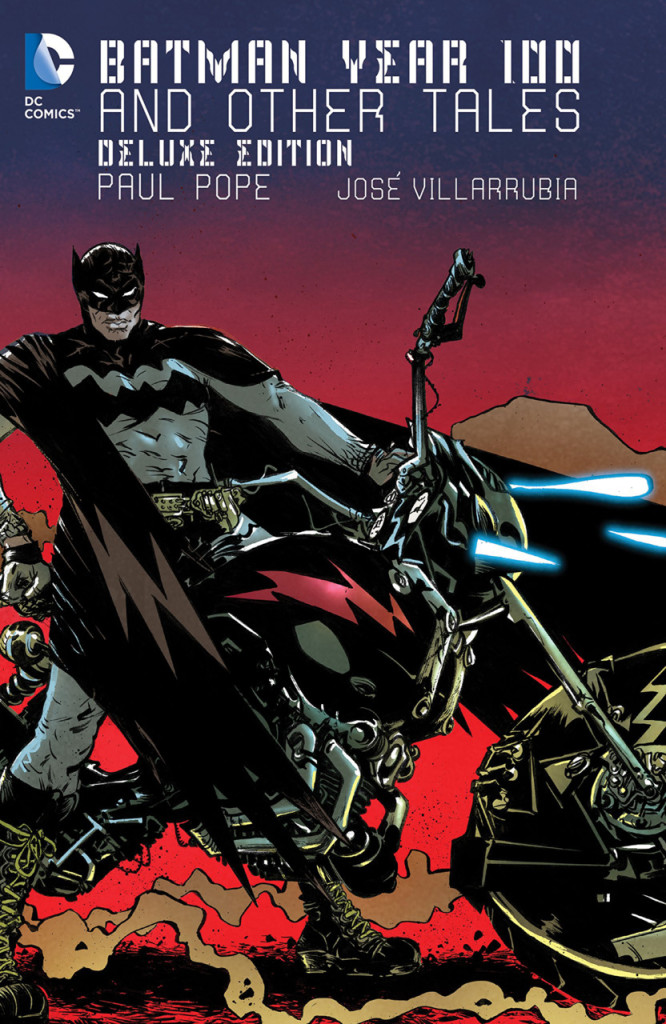 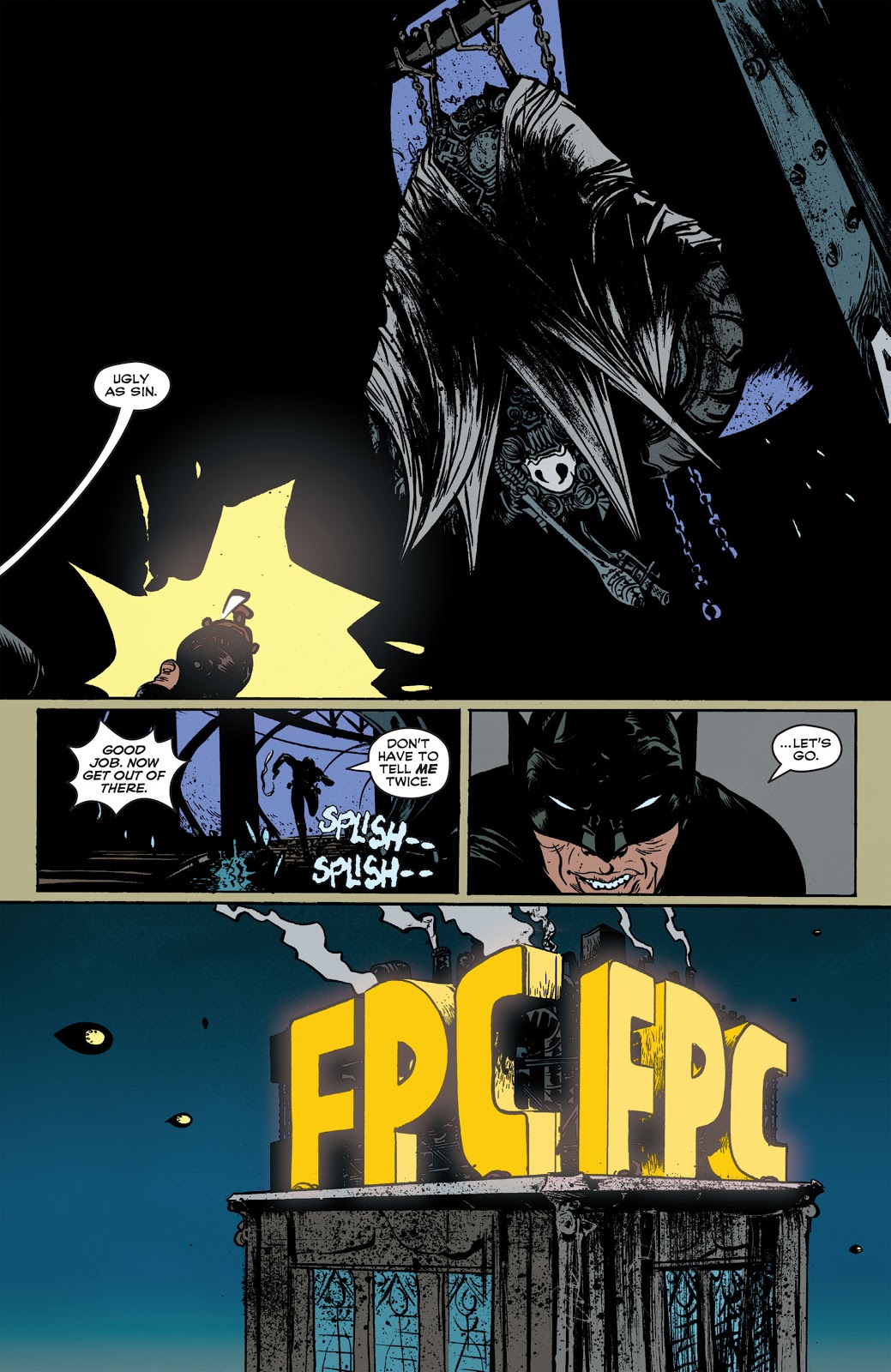 In his notes after the main story, Paul Pope writes that his ideal Batman ought to combine the best elements of a Fritz Lang film with those of a Hong Kong action movie, and by those criteria Pope has created a near faultless work.

Pope styles his Batman very much on Bob Kane’s original version, although bulkier, with an almost flat hood with very slight bar-ears, and has him almost perpetually in motion. There’s hardly a scene in which Batman appears before the final third of the story where he isn’t being chased somehow. An early sequence with dogs is very effective, and motorcycles play a big part.

The title both nods to Frank Miller’s definitive origin in Batman: Year One, and reveals this isn’t any ordinary Batman. He appears in a future where Gotham police commissioner Gordon refers to his grandfather’s police career, and in which the state constantly keeps everyone under observation, tracking them them digitally, via camera and even via recording implants in the eyes of police dogs. Batman’s presence in this fearful dystopian society is a threat, but not as much of a threat, we discover, as what is about to be unleashed.

Pope re-envisages Robin, while almost transplanting the honest and upright Gordon from the past, and for all the science-fiction trappings, Pope presents an almost hyper-real Batman. The notes display how much thought Pope applied to his costume and accoutrements, and how to draw them, but this is also a Batman who sweats, bleeds, and who’s out of puff following a long chase. Despite the toys of the future available to him, his primary offensive weapon is sharpened porcelain dentures worn for close combat. It makes for both a disturbing visual and a novel technique. “He can’t talk right when he has the teeth in”, notes Robin.

The insights we receive about this Batman are almost all visual, and it’s left to the remaining cast to propel the plot verbally. Much is revealed through piecing matters together, including the ghastly fates of Batman’s most frequent foes. There is but the single super power sparingly employed, yet despite it being so negligible it’s rarely considered elsewhere, it’s extremely effectively utilised in a world where there are no others.

Pope’s heavily stylised art won’t be for everyone. He pack his panels with detail, almost to the point of distraction, then overlays them with sound effects, wisps of smoke, or momentary flashes of light. In this manner he accentuates the concept of a comic panel freezing a moment. An interesting element is that many of his full-lipped people are of indeterminate genetic origin, and the excellent colouring of Jose Villarrubia accentuates this anomaly.

A matter that may bother some readers is the lack of explanation for Batman’s presence in this future, whether he’s the original article or a descendent. Should a myth require an explanation, or is it better remaining ambiguous?

As noted, copious notes accompany the story, and we also have a bonus, the reprinting of Pope’s first ever take on Batman from ten years previously. This Batman is set in the Nazi Berlin of 1939, not at all coincidentally the year of his creation, a theme Pope toys with in passing during the main course of this feast.

Of all the hundreds of interpretations of Batman over the years it remains rare to come across a re-working as daring and individual as this. It’s excellent. The Deluxe Edition may be larger, but it dilutes the effect of the main  story by adding lesser work. It’s still Pope, so still interesting, but nowhere near as compelling.