Tales of The Smiths 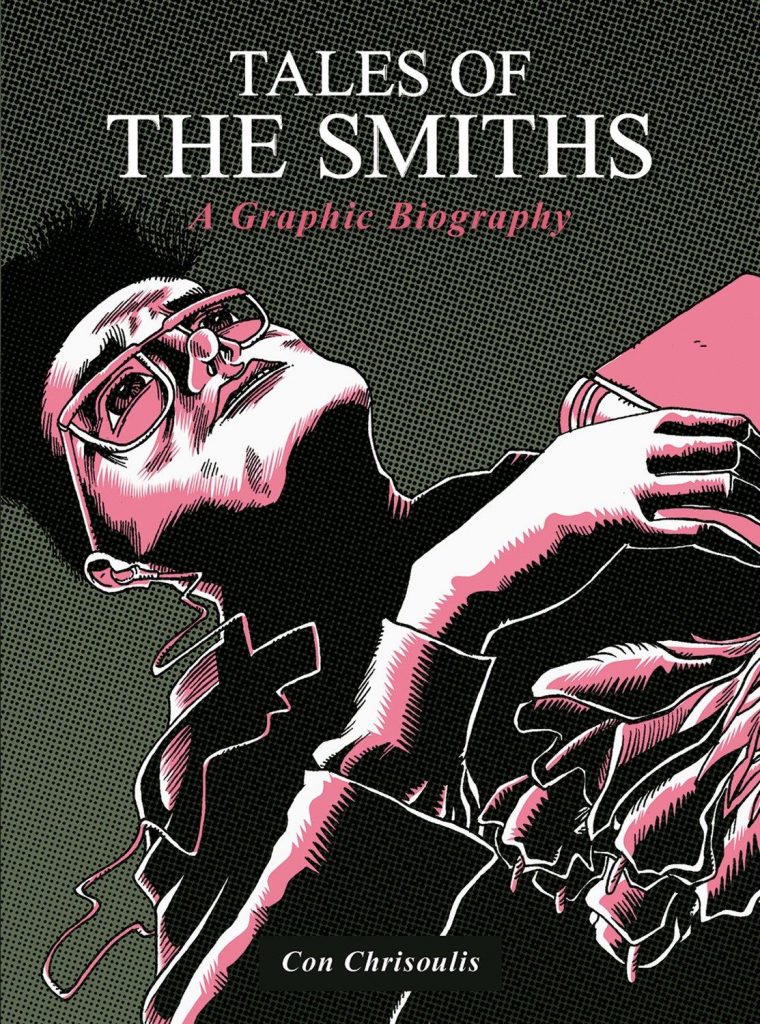 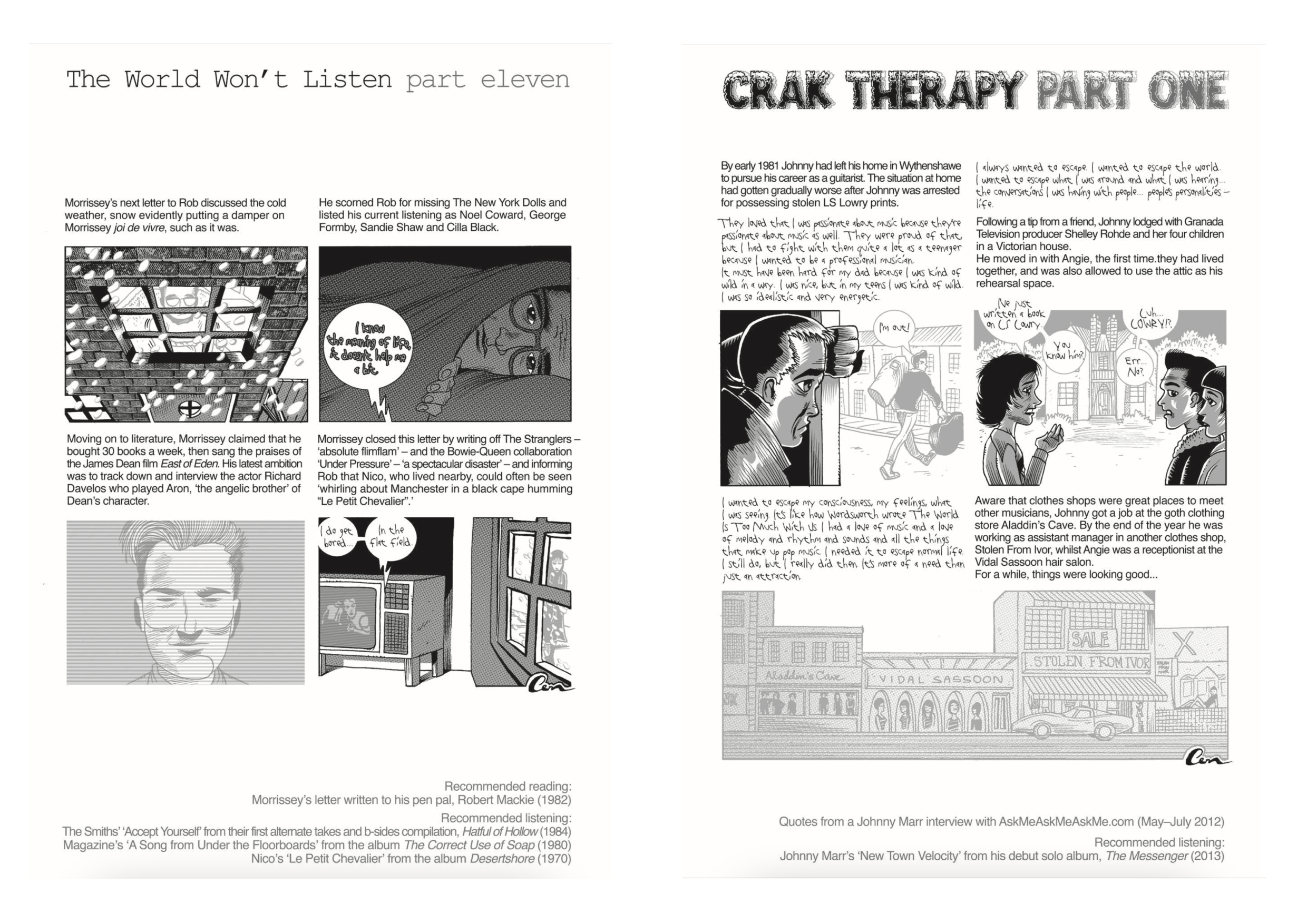 The stylish cover image of larger-than-life singer Morrissey, confirms that Tales of the Smiths, is indeed a graphic biography of the eponymous Manchester band. Initially a daily online web-comic, it’s now collected in a thick paperback.

Actually, Con Chrisoulis’ book might be more accurately called The Making of the Smiths, as whether by intention or exhaustion, it ends with the release of their first single. While this thwarts the urge to see personal highlights depicted, it’s ultimately a better story.

Behind the cover, the blog-style presentation, doesn’t instantly appeal. Each page squashes four panels into a landscape format, on what’s now a portrait format book. However, Chrisoulis uses the ‘spare’ space, for citations, and ‘recommending listening’ for each instalment. Traditional typeset text typically jars against drawings, however here it helpfully distinguishes authorial narration, from the ‘hand-written’ font used when subjects tell their own stories. Production norms now favour colour, but even beyond the band’s album art, there is something about The Smiths that is distinctly monochrome. In any event, these are nuances of graphic novel aesthetics that may not concern Smiths devotees.

What devotees want to know is that the book covers key elements: Steven Morrissey’s musical obsessions, like Patti Smith and the New York Dolls; his love of kitchen sink drama; his emerging Oscar Wilde wit; and the choice of band name. Morrissey’s fascination with gender and sexual identity is revealed through his reading (list provided) of books on Women’s (and Men’s) Lib, and his cautiously romantic letters to friend James Maker. Digressions on Mozza’s musical heroes may feel too long, but they’re more than that. Patti Smith and The Dolls-modelled rock androgyny, and Patti proved that writing poetry could be parlayed into fronting a rock band, so this is credibly the story of Steven creating the ‘Morrissey’ who could front The Smiths. The Johnny Marr strand focusses on his developing guitar craft, yet still brings to life a bright and thoroughly sound bloke, while bandmates Mike Joyce and Andy Rourke get respectable coverage. There are plenty of fascinating details, and only the most obsessive of Smiths obsessives could fail to find new delights here.

Beyond the band, there’s wider sociological interest. The backdrop is Britain around a political turning point with Margaret Thatcher, beginning the erosion of welfare and public services, and fuelling an economic divide, with Manchester on the wrong side. This should be equally fascinating for those who lived it, and those who’ve only lived with the legacy. Morrissey himself, resisting pigeon-holing as ‘gay’, and with later talk of celibacy, and ‘humasexuality’ (sic) seems better defined by modern term LGBTQIA, adding further contemporary interest.

Chrisoulis constructs the story combining fannish obsessiveness, with academic diligence, quoting magazine interviews possibly clipped and saved for decades. He summarises context in the limited caption space, and footnotes on each page don’t hinder the flow. His art does feel constrained by the four matchbox-sized greyscale panels, but he’s a confident illustrator, and gradually makes the format work for him. Check the striking (featured) page with Johnny striding away, as his father slumps forlorn against the door frame.

Amongst graphic biographies, Tales of The Smiths is almost unique in its comprehensiveness, albeit within a (well) chosen time-frame. It’s perhaps best read a chunk at a time, rather than over a weekend. Otherwise, any quibbles are for graphic novel connoisseurs, and there’s no significant reason anyone wanting a graphic biography of The Smiths shouldn’t devour this.

Chrisoulis is current working on graphic biographies of both David Bowie, and Jack Kirby, which he’s releasing via his Patreon and as pamphlet series. 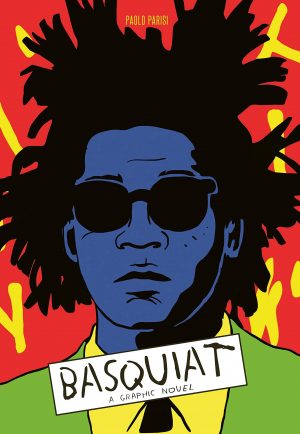