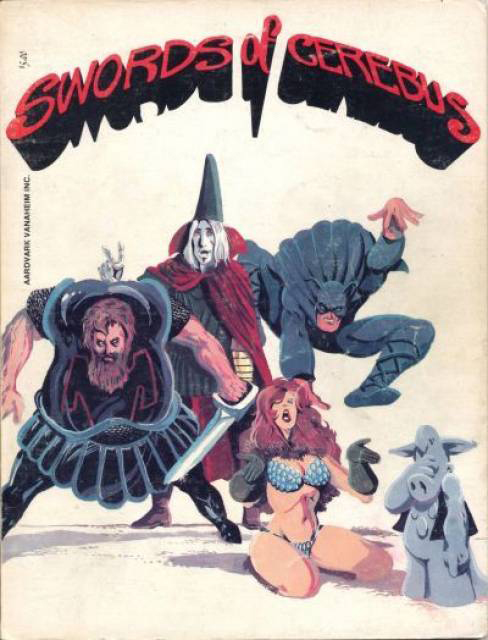 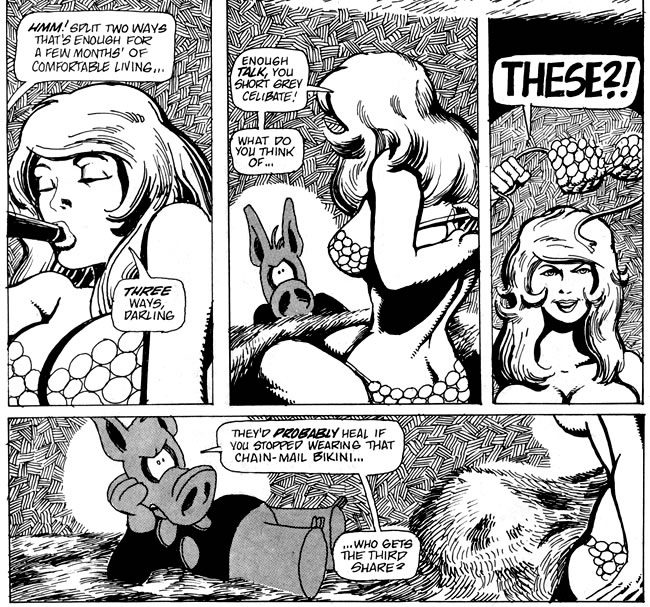 Swords of Cerebus Volume Three opens with ‘Swords Against Imesh’. This was the first story, involving his newly-acquired Conniptin army, in which Cerebus is drawn into others’ plans to grab power, and it wasn’t to be the last time he would find himself in such a situation. It would, in fact, become the main theme of the first two proper novels in the series: High Society and Church & State.

‘Merchant of Unshib!’ sees the return of Red Sophia. According to his introductory material, Sim was eager to see how he would handle Sophia without attempting to emulate Barry Windsor-Smith or Red Sonja artist Frank Thorne, and he does a fine job, with his women noticeably more slender than Thorne’s. This is also the first story where he spends more time on character interaction than propelling the plot forward, playing to his strengths as a writer.

‘The Merchant and The Cockroach’ introduces yet another character that would be around, in many guises, for years to come: The Cockroach. Taking a broad swipe at super-hero stereotypes, the Roach is a mentally anguished merchant who dons a bizarre costume each night to go out and assault and rob rich merchants. In later years, he would be used to spoof Captain America, Wolverine, the Punisher, Moon Knight and many more beloved super-heroes.

This story takes a great artistic leap forward. Sim, who had recently started using a brush, produces his best and most confident work to date, with truly impressive architecture and layouts that must have taken a great deal of time. However, it’s time well spent and shows the benefit of moving away from easier to draw locales like caves and snowy wastes. This additional effort reflected Sim’s desire for the setting to be an integral part of the story, rather than just background.

‘Beduin by Night’ is somewhat spoiled by the use of duo-tone board, and the artwork is far muddier than we are used to. As well as the return of the Cockroach, Elrod of Melvinbone is also back. Elrod and the Roach would go on to have a long relationship, with the hapless albino often forced to join in his insane friend’s delusion.

This volume ends with a story not included in Cerebus, ‘What Happened Between Issues Twenty and Twenty-One’. This eight-page story, inked by Sim and Gene Day, features amusing skulduggery, much of which happens while Cerebus is unconscious or almost comatose. This includes a spell of a few weeks in a freak show as one of the exhibits, and leaps forward to a time when the story is about to become much more political.

As always, the revealing and frank essays before each chapter make these almost invaluable reads for anyone interested in the growth of this character and his creator. And the artwork and writing both continue to show marked improvement (with the lamentable and never-to-be-repeated exception of the brief dalliance with duo-tone), with Sim displaying more and more of the trademark drawing style that would eventually become one of the most accomplished and distinctive in self-published comics.