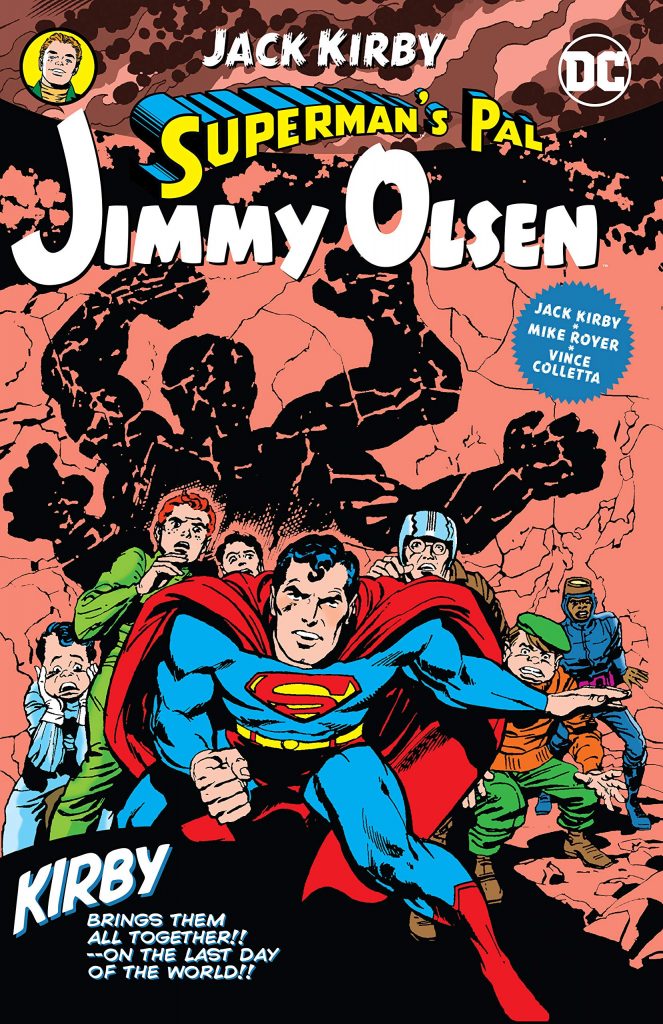 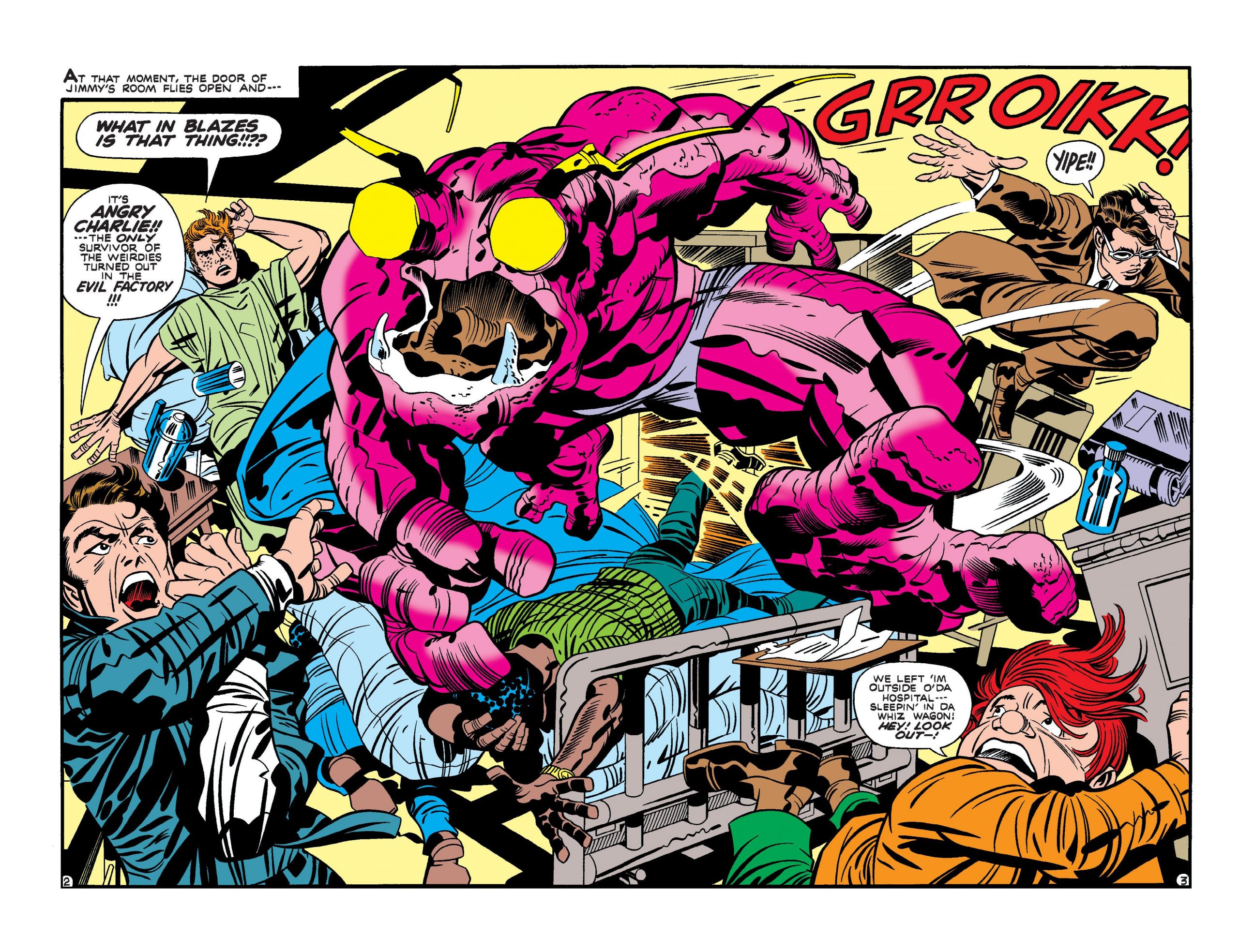 Jack Kirby’s early 1970s Jimmy Olsen stories were at the time the first indication a new generation of fans had of his working methods when unrestrained by editorial interference. It had occurred in the 1940s, but while readers then may have recognised the quality of his collaborations with Joe Simon, they were unlikely to have known his name. The deal Kirby had with DC gave him almost unfettered creative freedom, and he revels in it.

Possibly moreso than any other comics writer Kirby considered first what elements young readers would find intoxicating, then built the stories around that, finding a place for Jimmy and Superman. Every young lad wants to be part of a gang, so the Newsboy Legion feature all the way through. He has a vampire, incredible cars, the most fantastic monsters, secret hideouts, gangsters, aliens, comedian Don Rickles, prehistoric creatures… the list goes on and on. Kirby also kept on top of the latest scientific developments, and while stories about gene-splicing, cloning and DNA experiments are now commonplace, at the time he introduced them to comics they were cutting edge scientific speculation. Jimmy Olsen is likely to be the first time huge numbers of readers ever encountered the ideas.

Excitement and novelty leap from the pages. Sometimes, as per the sample spread, the threat just manifests with no warning, and a constant is the frenetic, fast-paced energy. Jimmy and the Newsboy Legion barely have time to catch their breath after concluding one adventure before they’ve begun the next, such is the surreal, chaotic life portrayed. For all the energy, these stories are conceptually immense, but single note in terms of personalities, so if that matters, Kirby’s wild imaginings here aren’t going to connect. Nor is there any abiding theme other than adventure and spectacle. New Gods was the place for Kirby to anchor action to deeper thoughts, although one chapter has the interesting idea of Superman as just ordinary when he turns up on New Genesis. Kirby is considerate enough to include an African American kid, but then has him dressed in a scuba suit with flippers all the time. The intention isn’t insulting, and the exaggeration no more so than the other members of the Newsboy Legion, but even so… Along the same lines, Kirby was well ahead of most other DC writers of the early 1970s in featuring contemporary culture, but his version of it, interesting as it is, wasn’t anywhere near reality. Perhaps the insulting comedy of Don Rickles was funny if you grew up with it, but that’s not dated well either.

Kirby’s art is as energetic as his storytelling, crackling with creativity, looking even better when inked by Mike Royer toward the end. DC did insist on having the faces redrawn by other artists on his Superman, and eventually Jimmy Olsen. In the case of Superman, an insistence on maintaining the house style is perhaps understandable (if sidelining the massive issue of creative rights), but altering Jimmy as well seems petty considering Kirby took over the feature as one of DC’s lesser selling titles.

While on balance a complete collection is preferable to the content split over two volumes as was the case in 2004, DC have mystifyingly dropped some essays written for the original comics, and there’s been some production changes. The colour registers as more vivid, and in places skin tones either drop out altogether or are boosted to a level where characters look unintentionally bruised. These are minor caveats. Kirby sits way ahead of any subsequent comic creator when in comes to sheer conceptual energy, and this remains a wild ride.