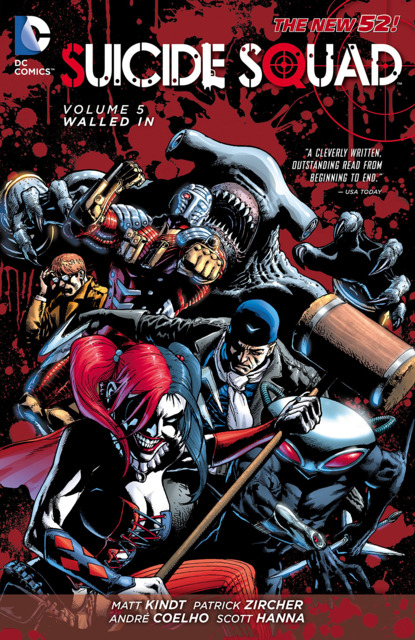 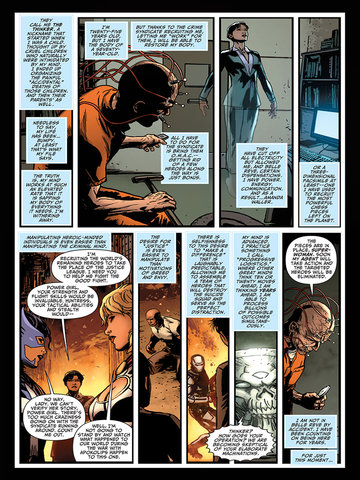 Amanda Waller has been the cornerstone character for the Suicide Squad, imposing and very definitely in charge. However, that’s now changed following events chronicled in Forever Evil and Discipline and Punish. Walled In finds Belle Reve burning and the Thinker (with the help of the Crime Syndicate) in control. A desperate Amanda Waller has convinced Deadshot to get the old gang together, Harley and Captain Boomerang joining him in a race to recover technology before it falls into the wrong hands. Unknown Soldier, Power Girl, Steel, and Warrant have also been recruited by Waller, but something is not right. James Gordon Jr. and King Shark still roam the halls of Belle Reve, halls that are slowly revealing darker and darker secrets, and while the good guys and the bad guys have to work together to save the world, the clash of egos, back-stabbing, whining, and gory bone-crunching violence will commence.

Matt Kindt’s story is action-packed with plenty of twists, but regular Squad readers are unlikely to be surprised. While featuring interestingly complex characters, it’s straightforward, entertaining, but no more. Kindt’s primary narration is from the perspectives of Waller, Gordon  Jr, and the Thinker, who share views on morality and the criminal mind, interesting because the characters themselves are ruthless and with questionable ethics. The quibble is that small details change quickly. A demi-god named Kamo is first called Kane, and a ghost in the O.M.A.C machine, who communicates by text, suddenly has an audible voice, but without explanation. It’s fun and drily humorous, but very clichéd by the end.

A number of artists portray the Squad here. Patrick Zircher returns, bringing with him shadows that heighten the tension as fires burn ominously against blacks and smudgy colours. Jason Masters and Carlos Rodriguez draw ‘Magic Bullet’. In ‘Flushed’, Jim Fern pencils as Wayne Faucher inks, and for the title story Sean Ryan pens the build-up to New Suicide Squad (which he wrote) with André Coelho (this some of the Brazilian artist’s last work before his death at age 35) pencilling and Scott Hanna inking. While the styles differ, they suit the nature of Suicide Squad, although the art switching from greatly detailed to simplistic is distracting, and weakens the emotional component.

The stand-out art is in ‘Under & Over’. Rafa Sandoval (pencils) and Jordi Tarragona (inks) are responsible for the main sequence of the story, while the flashbacks are handled by Roger Robinson. The styles differ, but are complementary, more so when Robinson varies his approach (with help from colorist Blond) from character to character. Power Girl’s flashback is in brighter colours, while Soldier’s, is a little grimier.

Suicide Squad has been an enjoyable series since starting with Adam Glass. What really worked in the beginning was unpredictability and anarchic adventure, but the impact diminished as it lost its capacity to surprise. Expected shocks don’t shock. Futhermore there are no concessions to anyone who’s not read Forever Evil, for whom there will be gaping plot holes. This is what adversely affects Suicide Squad in its latter run, and not necessarily poor writing or artwork.

Suicide Squad rebooted in 2015 as New Suicide Squad, starting with Pure Insanity, which refreshed the line-up.