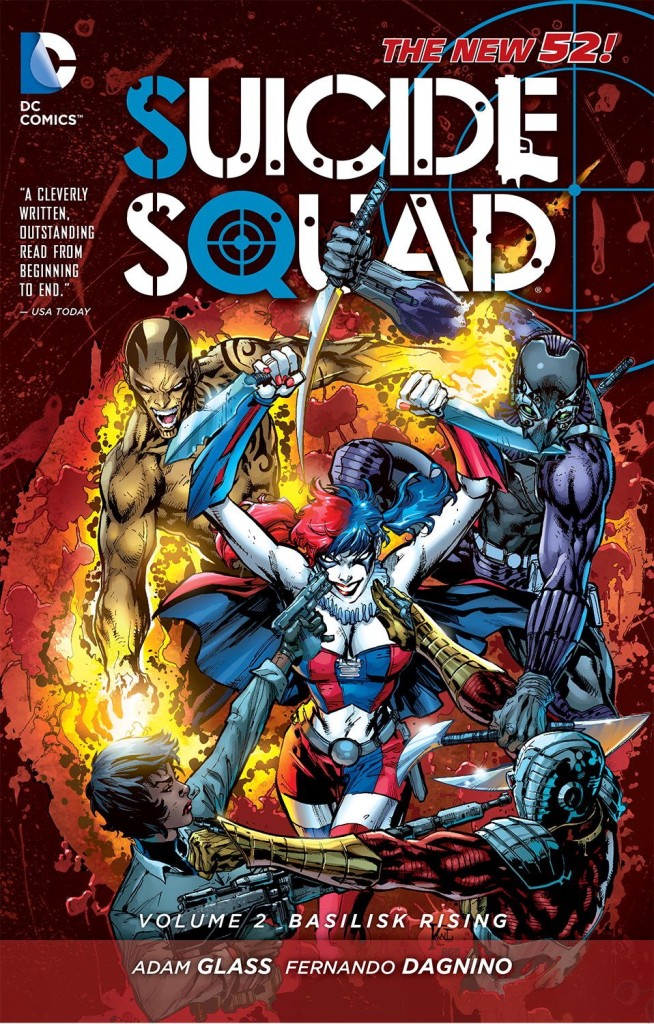 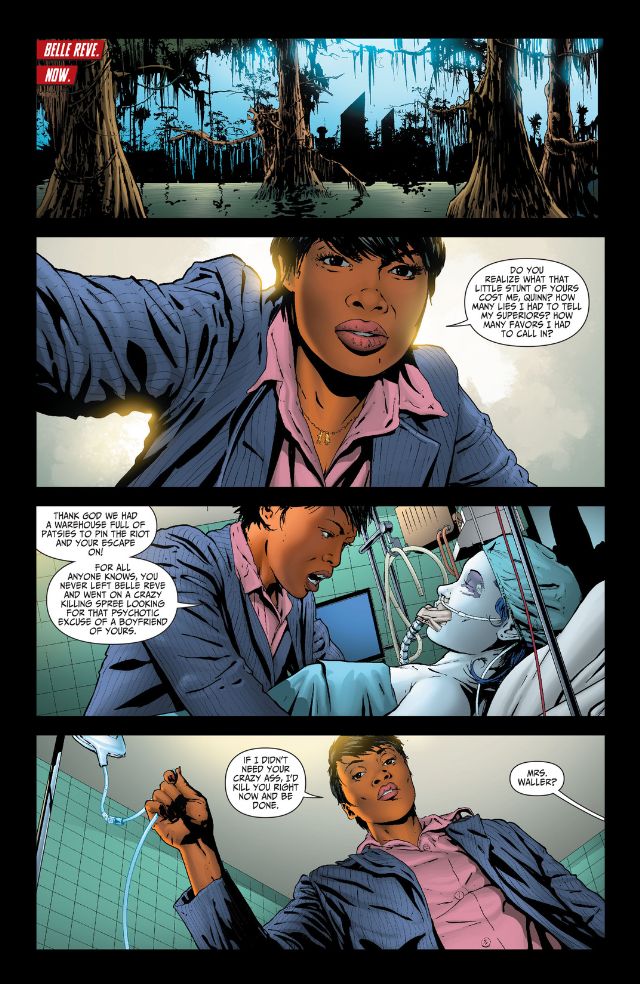 We find Harley in medbay, while Deadshot is dangerously off his game thanks to Harley’s “affections”. King Shark is struggling to digest his food, Diablo seeks deeper meaning to his life, and Black Spider gets back into action. Meanwhile, Amanda Waller is out for blood – that of a meta named Regulus, and she doesn’t mind spilling the squad’s blood if it means nailing her target. This picks straight up from Kicked in the Teeth’s cliff hanger ending, and doesn’t relent on its predecessor’s furious pace.

The Squad are sent after Resurrection Man, and then straight into the jaws of Basilisk to end that threat once and for all. And this being Suicide Squad, it all goes downhill pretty quickly from there.

Adam Glass weaves a wildly outrageous plot high on action and fun, with a decent splicing of tension. The premise that the Squad handles situations that even the heroes would find incredible, allows him room to let his imagination run riot while balancing it with one-liners, insults, and witty dialogue. The plot twists and turns, helped by flashbacks in purple hues suggesting a traitor in the midst. Waller’s origins in particular are explored, explaining why she started Task Force X, simultaneously injecting a more human element by giving her relationships outside work, but not quite explaining her ruthless pragmatism. One issue affecting the plot is DC’s by-now typical marketing strategy of crossing over with obscurer titles, hobbling the storytelling a little.

Four different artists contribute. Fernando Dagnino styles Amanda Waller’s origin story, and also the middle section of Basilisk Rising with close-ups that help character development and build atmosphere. Equally he brings light relief to dark material in the wider frames, by using a cartoon style that maintains Suicide Squad’s teen rating. Federico Dallocchio sticks to a simple layout that focuses his macabre art. Cliff Richards equally keeps things tense with contrasts of light and shade, but Carlos Rodriguez lacks the attention to detail supplied by the others. He chooses instead to fill his frames with a frenetic energy that clashes with Dagnino’s art, whose work bookends that of Rodriguez. Individually each artist is a good fit for Glass’s plots, but it’s the placement of differing styles that detracts from some very subtle character development intrinsic to the story, and not the artwork itself (which is consistent with the high standard presented in New 52). In its original single issue format this is not a big deal, but compiling the contrasting styles between these covers doesn’t work out as well as hoped.

Basilisk Rising has a style similar to an action-heavy ‘Summer Blockbuster’, explosions and carnage at every turn. Characters thought removed from the line-up suddenly re-appear, all seemingly part of Waller’s grand scheme. Glass doesn’t want you to like the Squad, but he shows their humanity enough for you to sympathise with them, before brutally reminding you that these individuals are on death-row for a reason. His screenwriting experience helps to entertain with a thrilling series of smaller stories wrapped up in a larger, action packed narrative similar to an episodic TV series.

The mayhem and plot twists continue in Death is for Suckers.