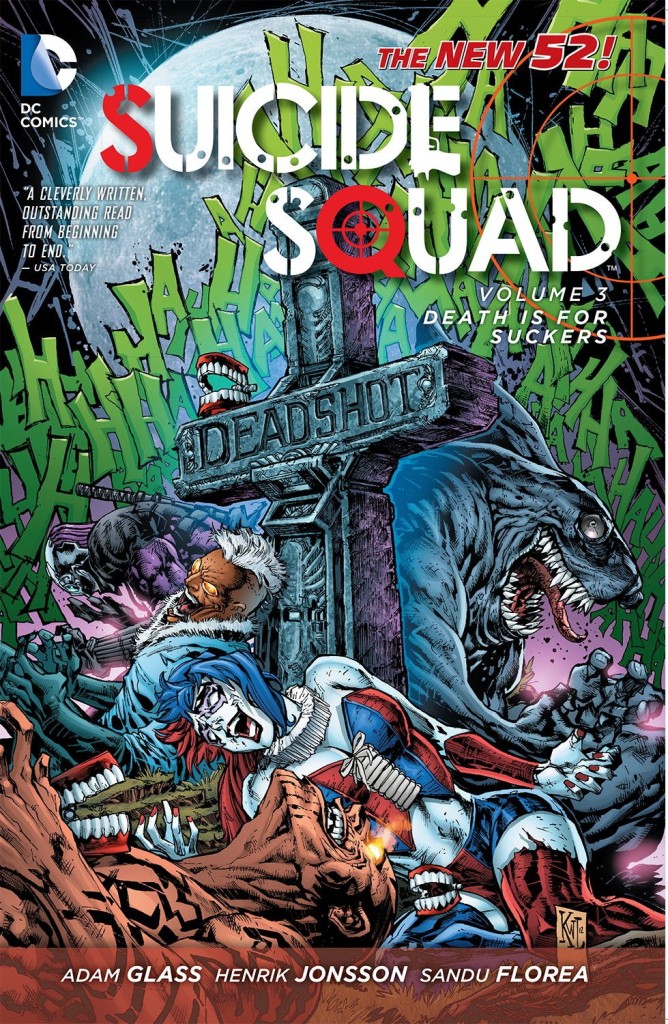 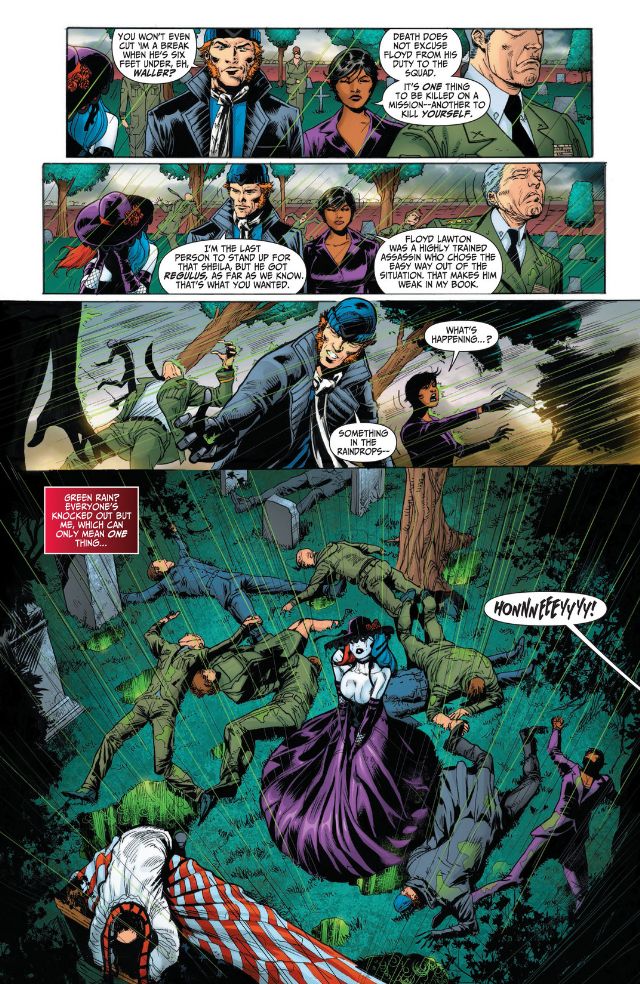 Harley Quinn’s character development has been central to the Suicide Squad, giving a new dimension to an already popular fan-favourite. What makes this unique is the return of the Joker in a Death of the Family story-arc, but this is a more disturbed Mr. J to whom applying the word ‘psycho’ might be complimentary. At the same time, some startling breakthroughs are made in rejuvenation that means old faces just keep popping up. The battle with meta-terrorists Basilisk escalates, and Yo-Yo gets the kind of family reunion everyone dreads. Harley and Deadshot’s relationship is also very intriguing. Is it love, lust or something far more complex? To paraphrase Deadshot, “Things are bad when the only person you can trust is Harley Quinn”. And does Waller have a far more personal motivation for sending the squad after Regulus than she lets on?

Adam Glass hit his stride here, the dialogue and plot a riot of fun. The art is far more compatible than it was in Basilisk Rising, and the most fun originates with of the character developments and introduction of new squad members. The art is gory and violent but Glass pulls comedy out of it all, poking fun at small things like Nirvana’s Smells like Teen Spirit being reduced to an elevator jingle, and King Shark suffering from vertigo. Yo-Yo returns to active service, while Black Spider and El Diablo are undergoing ‘re-programming’ (as unpleasant as it sounds) after the events of Basilisk Rising. The stand-out is once again Harley Quinn, becoming better as the character develops. Yo-Yo and Deadshot have also been nicely rounded over the run, and King Shark’s secrets drip fed through small revelations that make him more intriguing.

An important element Glass has fostered throughout is to make the members more human and therefore more relatable, without ever reducing them to basically good people the world screwed over. They are in this situation because of choices they have made, yet Glass never paints Waller as the lesser of two evils either. She’s as cold and brutal as the convicts she handles, that way her own choice. She just happens to be on the side of the government, and is by virtue of employment the good guy.

Artistically this is stylistically varied, but a lot more fluid in conveying the nuances of Glass’s storytelling. Fernando Dagnino’s rendering of Harley and Joker’s encounter is frightening, with the help of colourist Matt Yackey (continuing the excellent work he’s provided throughout the series this far) building fraught environs through big frames and full pages to tell the story. Henrik Jonsson and Sandu Florea make gory battle scenes come to life, really knocking it out of the park when they use full pages for the central action, smaller frames on the periphery helping to focus on individual perspectives. This enables Glass to cut loose with the dialogue, and just when you think you may have witnessed the best partnership of the entire series so far, Cliff Richards rounds off yet another cliff-hanger with big open frames containing some fine dramatic work.

Adam Glass handed over the series on a high, leaving behind a Suicide Squad that has left its imprint on pop culture. Harley Quinn’s re-genesis is among that legacy, with a fine contribution to the Joker’s development. A quick glance at the film trailer for Suicide Squad suggests that this incarnation of the Clown Prince of Crime will feature strongly, with parts of Death is for Suckers collected in The Joker: Death of the Family anthology.