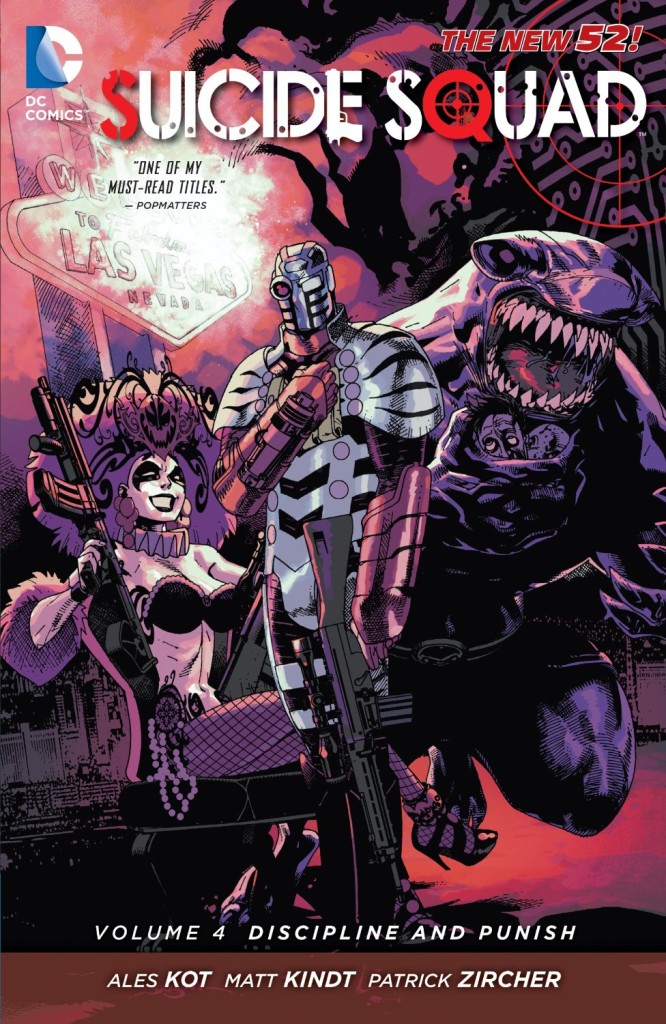 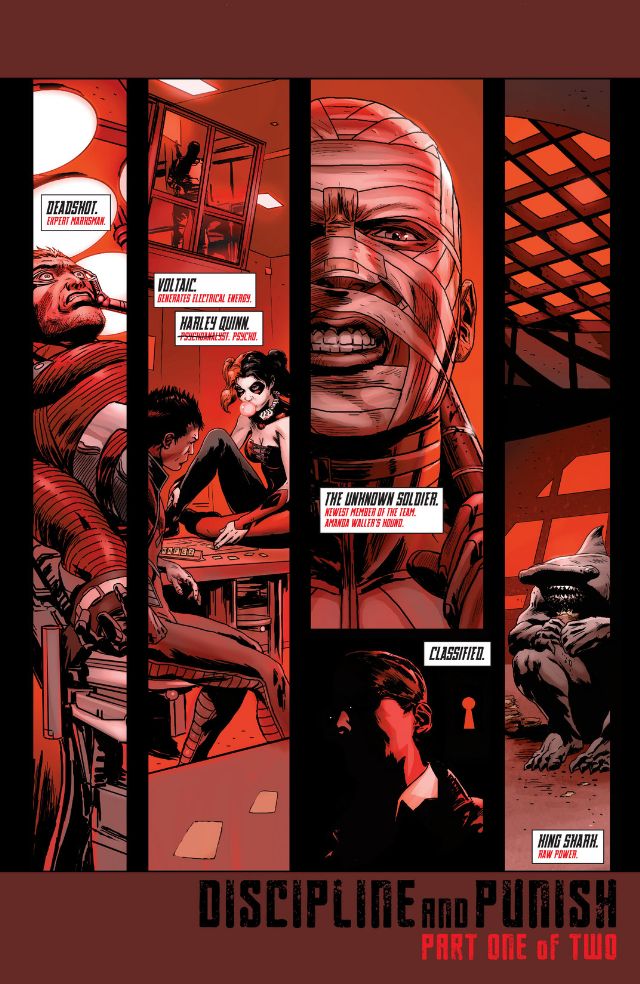 The Suicide Squad barely survived their encounter with Regulus, but made it back to Belle Reve thanks to new team leader, the Unknown Soldier, who swiftly brings discipline to the ranks. Waller is determined to bend the Squad to her will, recruiting James Gordon Jr, a psychologist and serial killer, as analyst to do so. Harley proves that she should never be underestimated, putting a plan into motion that not only ensures a better deal for the team, but a smoother more efficient team altogether with Cheetah as a new member.

Discipline and Punish is faster paced, Aleš Kot choosing to forge his own way rather than follow the plots set up by Adam Glass in the previous three volumes. The Basilisk storyline is unceremoniously dropped, the Regulus storyline disappearing mysteriously down the sewers with him. Kot scripts some solid and darkly comic dialogue with a drier and irreverent sense of humour, but plot holes are evident everywhere, and the long term effects of the rejuvenating Samsara Serum is unresolved.

Artist Patrick Zircher has a very clever approach with his frames, black borders accentuating some nice colouring from Jason Keith. Other moments of  sheer brilliance include stunning silhouettes on a red background, amped up action scenes, and glorious monsters, including King Shark. Sadly, the human characters lack emotion when they need it to drive the plot, draining Kot’s story of any connection.

An entirely different artistic team joins Kot for the finale, and while the colours remain good, penciller Rick Leonardi’s work lacks both emotion and facial detail. The combined inking efforts of Andy Owens, Derek Fridolfs and Marc Deering are simply satisfactory. This is apparent when it comes to Cheetah, one of the most fearsome villains in the DC universe, except here, where she’s a kitten in comparison. She simply disappears at one point, leaving another plot hole. James Gordon Jr. should equally send chills down your spine, but he is barely creepy and again let down by utterly emotionless features that should work in his favour, but don’t. The potential is further undermined by the rush to tie in with the Forever Evil crossover and the change of artistic team, resulting in an amusing, but weak finish.

Matt Kindt scripts two Squad origin stories that tie into Forever Evil. Both can stand apart, but Harley’s tale has more relevance to the Forever Evil storyline. ‘Point and Shoot’ looks at Deadshot’s origins and his reason for why he never misses, a tragic tale explored with reference to the past by Sami Basri, Keith Champagne, Carmen Carnero, and Bit, set off by subtly contrasting colours.

Neil Googe gives an anarchic cartoon feel to ‘Harley Lives’, Kindt looking very briefly at her teens, but choosing to focus more on what happened after the encounter that pigmented her skin (see Death is for Suckers). Harleen’s road to becoming Harley differs from that previously portrayed, but adds another good layer to the Clown Princess’s story, inducing dark chuckles. There are a few moments of splendour here, falling short of Glass’s work on the title yet still holding promise for the remainder of the series.

Still tying-in with the events of Forever Evil, the Squad returns to active duty in Walled In.