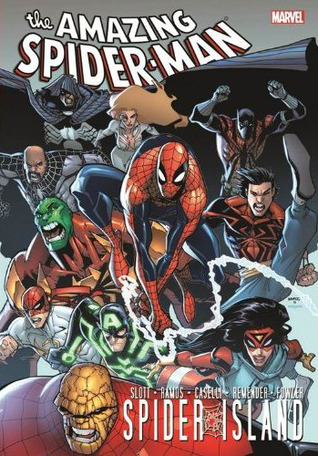 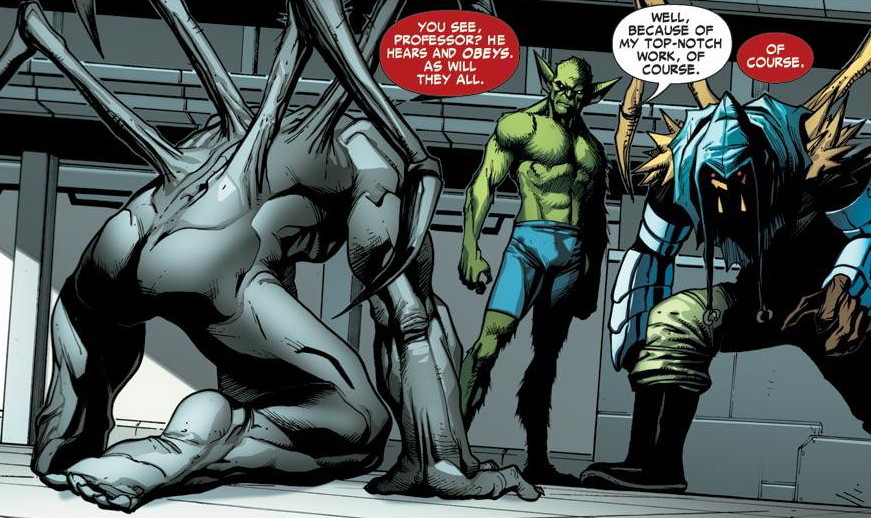 Since 1961, barring the occasional clone, Spider-Man has been unique. So what if everyone became Spider-Man? That’s the intriguing premise of Spider-Island as overnight thousands of Manhattan residents develop the same abilities Spider-Man has. And how odd that the creator of the previously mentioned clone, Professor Miles Warren, or the Jackal if you’d prefer, is now back in New York.

The closing sequences of The Return of Anti-Venom indicated people developing powers, and with his mission to wipe out Venom, Anti-Venom plays an interesting and unpredictable part here, but for all the interesting parts, Spider-Island is dragged on too long.

Among the fine moments are J. Jonah Jameson and Mary Jane Watson with spider powers, and a surprising act of revenge, but the problems outweigh them. The Jackal, unfortunately, is smeared with the taint of Spider-Man’s worst ever period, and being accompanied by cloned spider-men only serves as a reminder. It could be Dan Slott’s idea was to redeem the Jackal who’d previously been a sinister and credible foe, but that doesn’t happen. He’s also accompanied by a woman whose identity is concealed, yet that’s only a worthwhile device if it’s someone the readers already know, which is unlikely here.

The story is continually morphing, and while going with the flow would be the best option, there’s that nagging voice pointing out these switches just keep the pot boiling. In part that’s a preposterous criticism, because that’s the point of character continuity in the first place, but if it convinced here, then that nagging voice wouldn’t be present.

For all that, the coda is excellent. It follows-up logically on events that occurred, includes some great moments with both Carlie Cooper and Mary Jane Watson, and a brief sequence with a guy named Elio summing up how the experience may have changed New Yorkers. Spider-Man’s full powers are back, but a safety valve is removed. There’s also a moment where a choice is possible, and instead of soul-searching and hand-wringing there’s an instant answer. That chapter’s a gem.

Most of Spider-Man sections of this book are illustrated by Humberto Ramos who’s modified his style considerably since his previous run on Spider-Man. It’s still edging toward cartooning, but the irritating exaggeration is gone, and he packs his pages with activity.

Spider-Man’s not the only hero featured here, though, and he’s unaware that his old high school buddy Flash Thompson is serving as the host for the Venom symbiote, although under controlled conditions. Venom’s ultimately pivotal participation is set against his father, with whom he had a troubled relationship, being on death’s door and lying to his partner to keep his other activities covert. At this stage of his career Rick Remender wasn’t as subtle or accomplished as Slott, and provides a more straightforward contribution. Tom Fowler’s art combines clear storytelling with an interesting approach, and he’s entirely under-rated.

The next volume is Flying Blind.