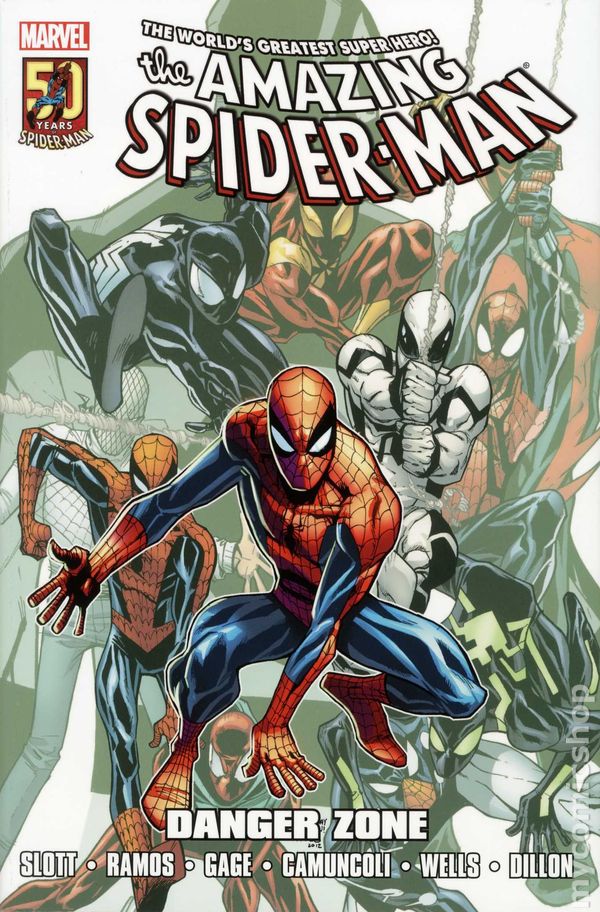 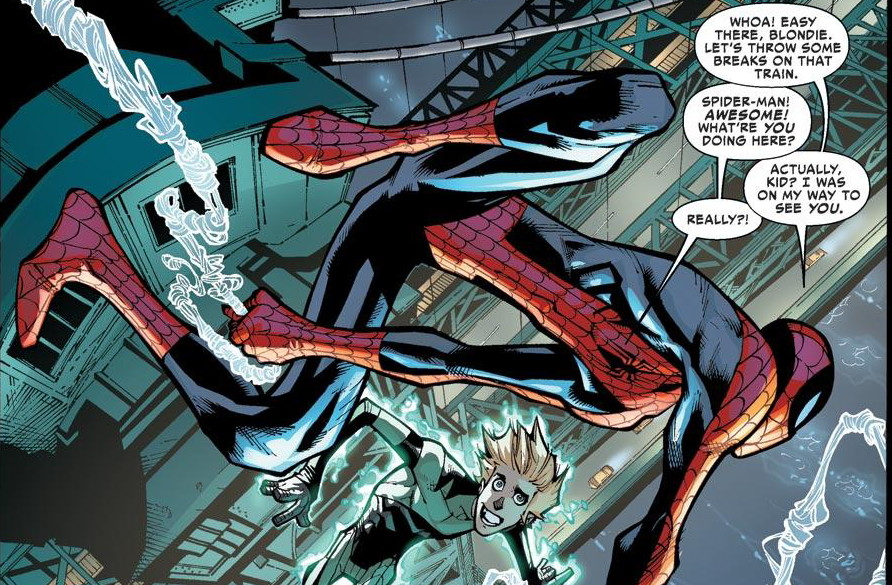 The first of two longer stories reprinted in this collection was conceived to tie in with the 50th anniversary of Spider-Man’s creation. Over the years there have been many narrative references to a motto from his origin story: “with great power comes great responsibility”, but Dan Slott applies his creative perspective to supply a previously unseen riff on the theme.

The lab accident replicates the circumstances in which Spider-Man was created while supplying other abilities, and Slott’s story plays out to reveal what happens when a less conscientious and diligent youngster is given a great gift. Alpha’s never been particularly motivated, and initially uses his abilities to score with the girl he’d not previously had the confidence to talk to, and ramp up his popularity. The ego escalates from there. Slott then adds an extra layer by twisting the motto as it might apply to Peter Parker for the conclusion. Humberto Ramos is back to drawing his distorted, angular Spider-Man

There’s an interesting role for Reed Richards, cementing his standing on the genius scale by noting he’d already discovered and discarded the subject of Parker’s experiment, commenting how the genie should sometimes remain in the bottle.

Zeb Wells and Steve Dillon’s interlude story is quite the touching graveside chat between Peter Parker and Aunt May if taken on its own merits. Those concerned about continual character development, however, might note that the underlying emotional foundation of the story, was addressed by J. Michael Straczynski during his run on Spider-Man.

The second extended tale provides the book title and concerns the return to New York of the original Hobgoblin, long presumed among the deceased. He’s not best pleased at his identity being usurped. Not the time, then, for Spider-Man’s spider sense to hit overdrive, warning him of everyday minor inconveniences as if an attack from the Hobgoblin, nor to be captured as Peter Parker. Christos Gage scripts over Slott’s plot, and he hasn’t quite matched Slott’s facility for dialogue that’s clever without ever sounding unrealistic, but that’s a minor caveat regarding an otherwise decent story. Giuseppe Camuncoli and Dan Green provide the art, and elements foreshadow the following Dying Wish.