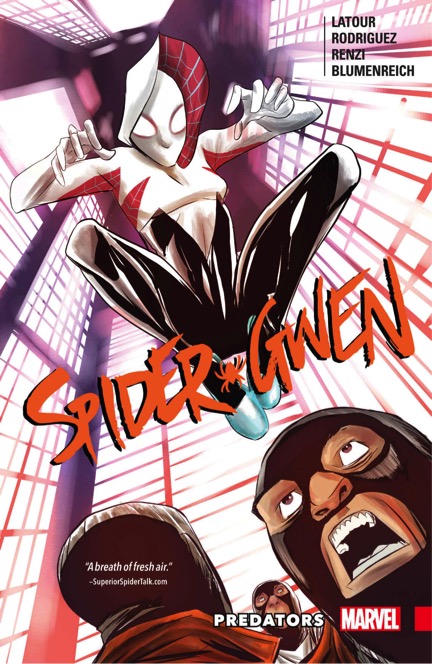 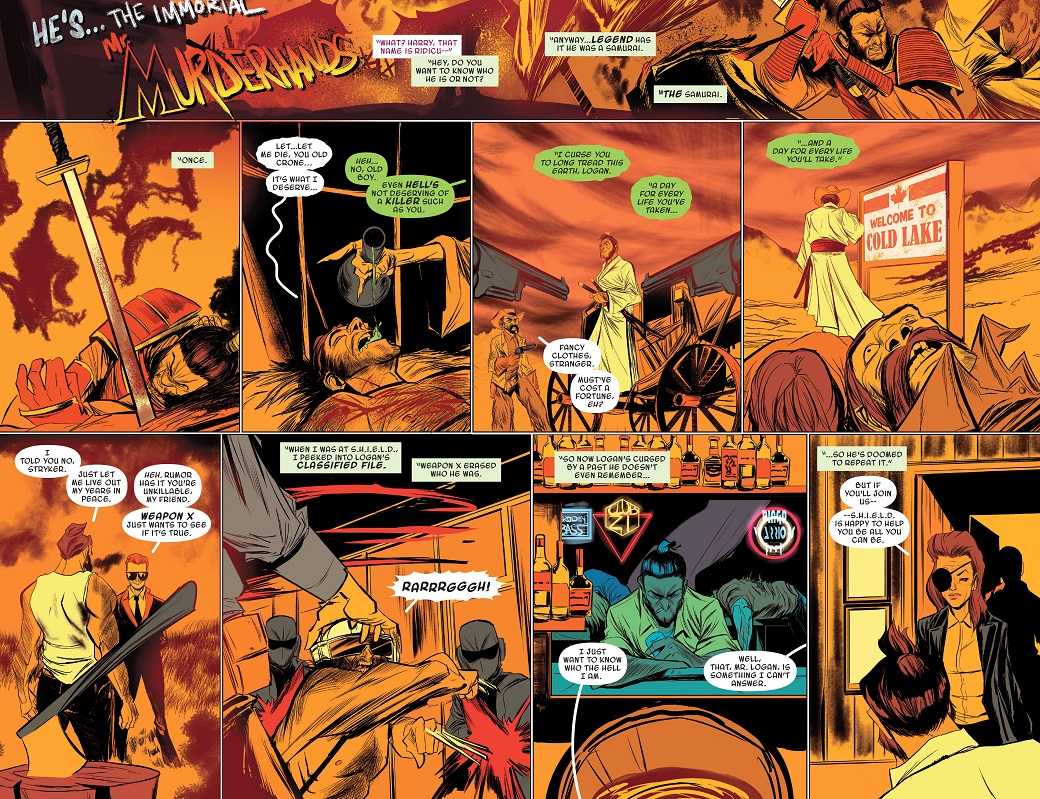 In Predators, Gwen Stacey and Harry Osborn are hunted by various villainous ninjas and this universe’s male Wolverine, a nice contrast with the Wolverine adventure in Long Distance. Gwen knows she is being tricked by Matt Murdock, but feels she cannot change their fate and has to make a tough decision: does she give up being Spider-Woman or let Harry succumb to the lizard infection? The interpersonal relationships between the characters are well developed as Gwen and Harry share more emotional scenes as they try to escape, and Wolverine and Shadow Cat are given short but effective backstories that characterise them well. The tensions run high toward the end as the Rhino and Captain Stacey have a violent encounter.

It is evident that Jason Latour and Robbi Rodriguez had more time to dedicate to Spider-Gwen for this collection. Predators focuses on a more complex plot and, for the most part, is paced well, providing effective background information while maintaining good tension and action. The wonder of Rodriguez’s art and Rico Renzi’s colouring culminates in the title sequence of the second chapter, where the credits are coloured and drawn in as sound effects while Gwen and Wolverine are fighting. It so beautifully illustrates what this title is capable of and should be: a seamless blend of action, colour, art, and strong characters.

Predators also features some amazing humour. The many metatextual references to Murder names (Mr. Murderhands, Murderface, etc.) are cleverly written and revealed. The final chapter shows a Watcher watching the Spidey-Family from Sitting in a Tree compete on a Family Feud-like game show. He is enjoying the program until his superior yells at him. Quick, witty, and relatable, the humourous Watchers are a highlight in this already strong work.

While this is the best volume since Most Wanted?, the ending has some glaring problems that taint how well the previous chapters combined characters, plot, colour, and action. Straight after the hilarity of the Watcher watching television, Latour provides a cop-out ending amid a nonsense plot as the scene shifts to the Mary Janes playing a show without Gwen. Jorge Coelho can’t maintain facial consistency, with the expressions and facial features changing constantly, and the fluctuations between cartoonish and realistic faces better suited for a humour strip. This is coupled with a lack of backgrounds or panel details. The colourist, Lauren Affe, manages to fill the space with nice hues that differentiate between day and night, which isn’t enough to make this an adequate ending to such a strong story.