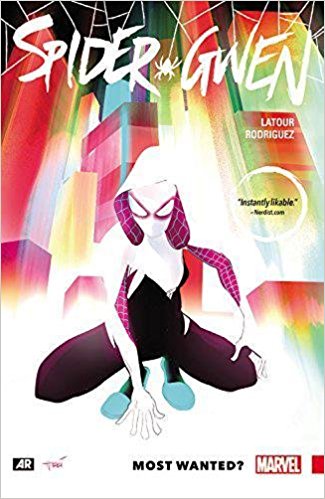 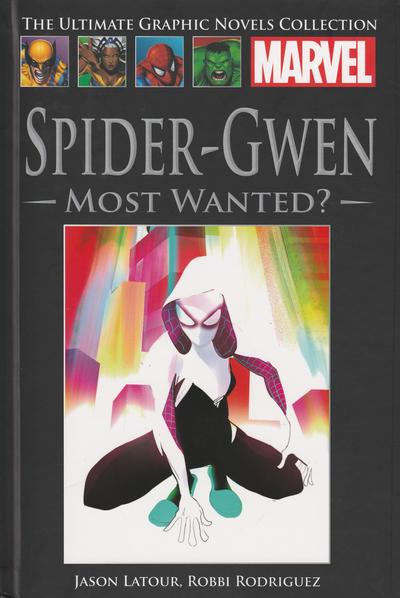 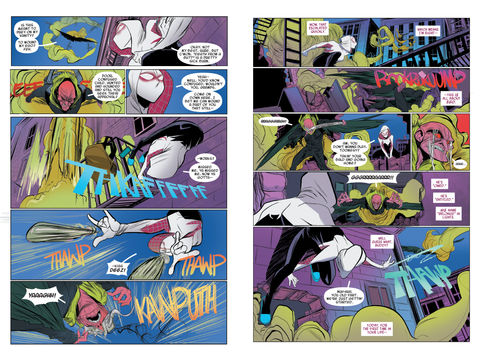 Spider-Gwen takes place in an alternate universe (Earth-65) in which Gwen Stacy, rather than Peter Parker, is bitten by a radioactive spider and ultimately becomes Spider-Woman. Earth-65’s Peter Parker dies as a result of turning himself into Spidey’s villain the Lizard. Both the police and the public blame Peter’s death on Spider-Woman and call for her arrest, which makes things awkward for Gwen at home as her father, George Stacy, is Chief of the New York police. This opening volume follows Gwen trying to overcome guilt associated with Peter Parker’s death, while also being hunted by police, monsters, and gangsters alike.

This is Spider-Gwen’s first solo title, as the character was introduced in Spider-Verse, an alternate universe storyline where assorted different Spideys meet. Jason Latour captures the humour of the original Spider-Man with unforgettable modern banter, mostly from Spider-Ham, and the storyline depicts Gwen’s struggle with loss, and her attempts to balance being a wanted superhero and a needed drummer in the rock ‘n’ roll band The Mary Janes. Spider-Gwen feels like a developed character who both pays homage to previous Spider-Men but is also unique enough to branch out in her own direction. Latour characterises Gwen as a strong female trying to cope with the loss of a friend and the subsequent turmoil of being a superheroine.

The most striking part of the Spider-Gwen books is the beautiful colours that pop off of every single page. Rico Renzi makes Earth-65 look amazing with bright pinks, purples and greens and makes Robbi Rodruiguez’s new suit design for Spider-Gwen stand out. Her suit is a thing of beauty, bringing a refreshing and feminine look to the character. The rest of the volume’s art is exceptional, with the fight scenes capturing a feminine grace in Gwen’s movements that also suggests great strength.

The downside to Most Wanted is that it doesn’t supply a lot of background information. The reader who’s not read Edge of Spider-Verse or any previous material can feel left out of the narrative. The storyline is nice, but quite choppy and seemingly random to anyone unaware of what the creators are doing with different characters in this alternate universe (i.e. BlackCat as Chat du Noir). Overall, the character design, characterisation, and art run this volume, while the constant references and changes from the previous universe may go over the head of a relatively new reader. The series continues with Greater Power. 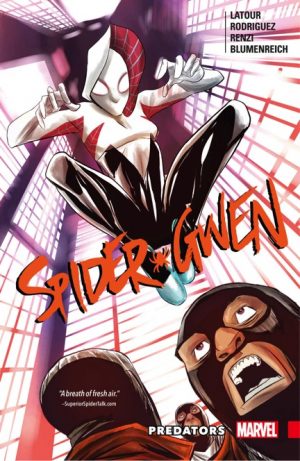