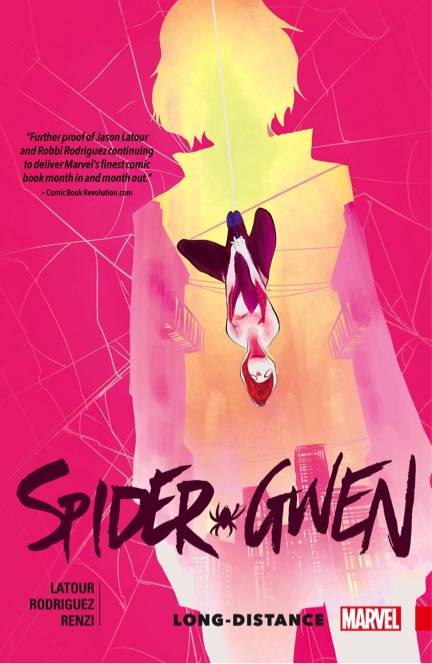 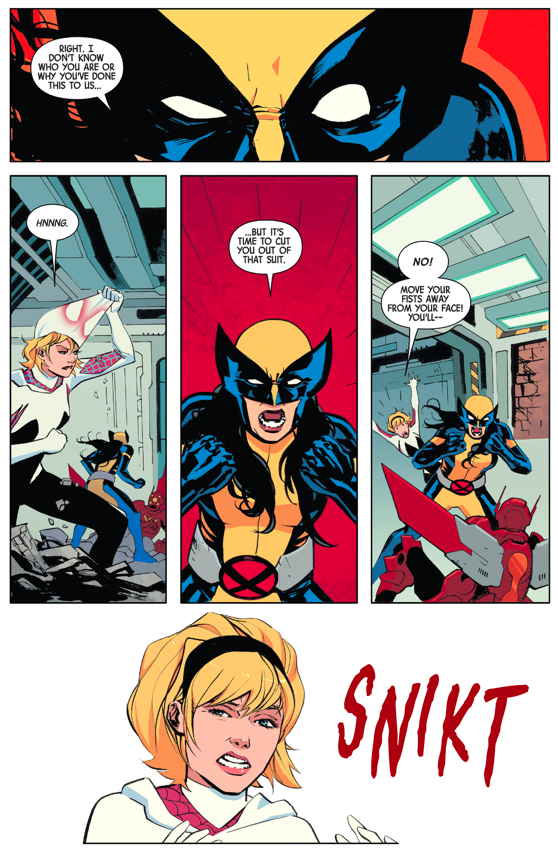 Long Distance doesn’t necessarily move Spider-Gwen’s core plots along, but stays true to the Spidey humour teased out in the previous volume. Jason Latour begins with a Thanksgiving story that focuses on what it means to be family. Like the Halloween tale from Weapon of Choice, it has nice mood and colouring, which makes the subsequent Christmas tale disappointing. That relies too much on gimmicks not previously seen in the series, like videogames, using exposition to beat it into the reader’s mind that they are using videogame lingo and imagery. It further disappoints with a convenient resolution of a problem occupying the entire volume. Overall, Matt Murdock acting as an evil Santa Claus is the only reason this passes as a Christmas tale, and is evidence of some lazy writing.

Far better than the regular continuity is a selection of short stories by Latour. They display the playfulness the readers have been craving in the Spider-Verse. A few feel shoehorned in, like making Gwen a luchadora fighting the She-Hulk for money, but on the whole these short stories let the humour of the series break through. ‘Koala Commander’ with art by Emi Lenox, is a hilarious take on a “bad” villain. ‘Eight Days a Week’ gives delightfully quirky insights into Gwen’s everyday adventures, and the highlight of the short stories is ‘Who Watches the Watcher?’, which depicts a Watcher attempting to coerce the Mary Janes to perform in a battle of the bands competition without them knowing. The cartooning by Olivia Margraf nicely matches the humour. While the art for all the short stories is a mix of different teams with differing styles, it has unwavering quality. Rico Renzi’s colouring remains the strongest point of this series’ accomplishments, while guest colourists Jordie Bellaire, Jim Campbell, and John Rauch use similar palettes to tie the stories in.

Finishing on a high point is the Tom Taylor story in which Gwen teams up with the Laura Kinney version of Wolverine. Gwen and Laura’s bodies and universes are switched in the final chapter, and the characters’ failed attempts to understand each others’ powers is laugh out loud funny. It is a true girl power comic that endorses the strength of the characters. Marcio Takara’s art captures the pair’s power as well as their expressions with and without their masks on. It is anything but lazy.

Long Distance strays away from big story points, using holidays and gimmicks instead of powerful storytelling devices to move the plot. The uptake is that the short stories tend to demonstrate the humour and silliness inherent in our dimension-jumping superheroine and her allies. The highlight, however, is the Wolverine chapter, avoiding the regular creative team of Latour and Rodriguez. Long Distance is clearly a filler volume. Predators follows.