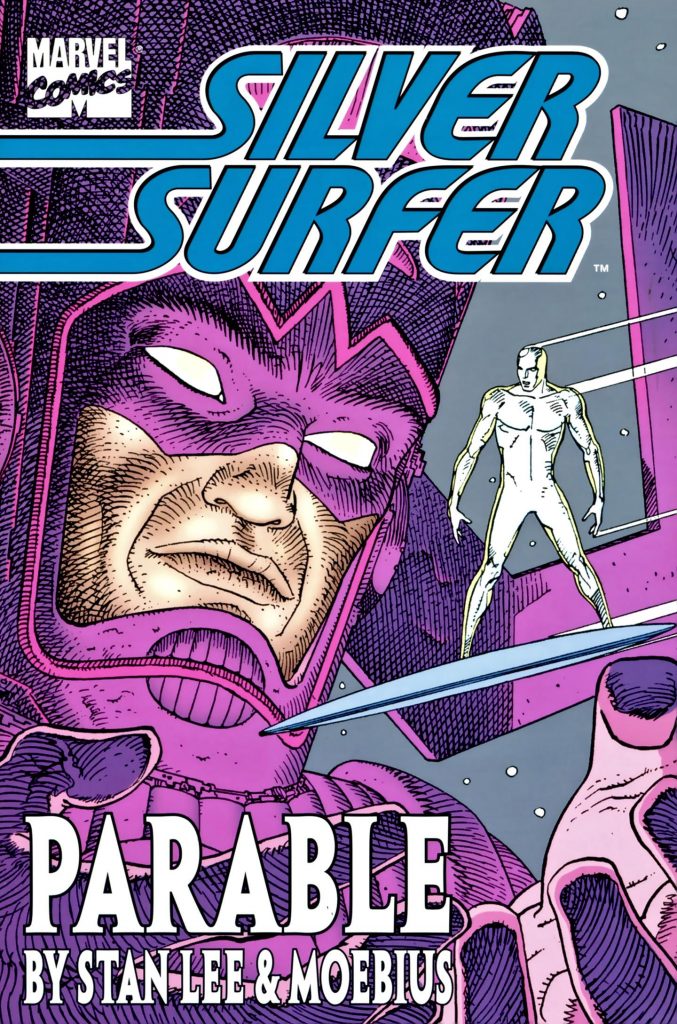 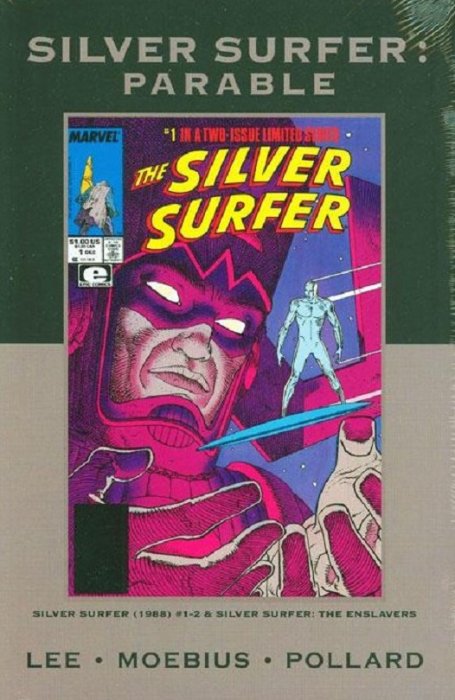 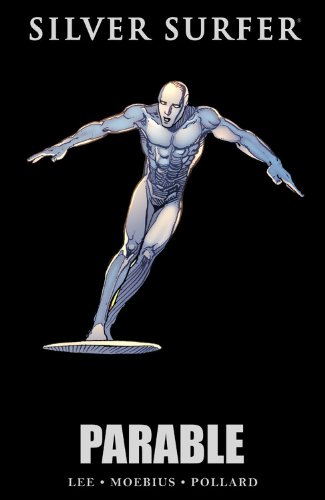 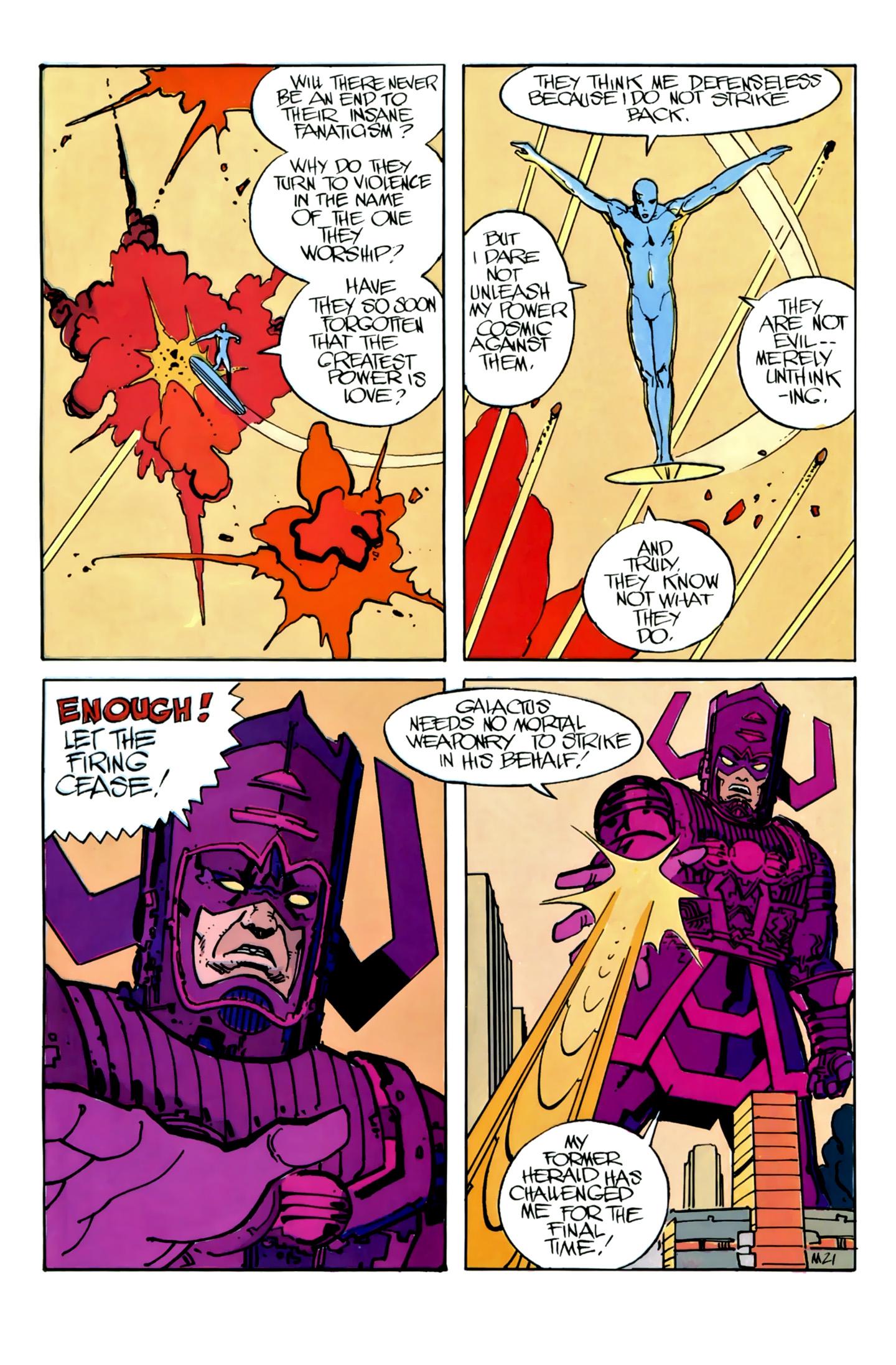 Despite being Jack Kirby’s creation, the Silver Surfer was always very close to Stan Lee’s heart, and from the late 1960s there was either a decree or an unspoken understanding that no-one else was to write his solo adventures. As Lee was so busy with other duties, in practice this meant no Silver Surfer stories other than guest slots, but Marvel’s 1980s graphic novel line offered new possibilities, and Lee wrote three of them.

In theory there could be no better artist to illustrate the Silver Surfer than Moebius, who’d redefined science fiction art for comics with Arzach, featuring another character who serenely travelled in odd worlds. Yet Parable is disappointing, written in very broad strokes, and for all the gushing introduction by Lee, the art doesn’t convey Moebius having any interest in the plot he received.

That’s possibly because Lee’s taken the very easy option of having Galactus again turn his attention to Earth, where for some unexplained reason the Silver Surfer is living as a vagrant. Instead of attempting his usual trick of reducing a planet to a lifeless husk by sucking out the energy to sustain him, Galactus masquerades as God, and is exploited by a charlatan whose ministry is losing adherents. It’s a confusing relationship, as there is no direct connection, yet Lee includes a sequence of the authorities holding him responsible for the trouble Galactus is stirring. There are brief flashes of interest, such as Galactus momentarily considering that perhaps he is a God, but the interesting aspects are always sunk rather than fleshed out. That occurs again in a simplistic ending. The most unfortunate aspect of Lee’s writing is the dialogue, which time and again kills any mood with inappropriate heavy moralising in the most florid terms.

Moebius supplies a long essay detailing his thought processes while preparing the art, which displays an admirable consideration, but is he over-thinking? There’s eventually very little of the instinctive Moebius instilling a mood. Perhaps we shouldn’t consider his version of the Silver Surfer as the best, he humbly advises! Moebius is no stranger to detail (see his work as Jean Giraud on Blueberry), and his Moebius style isn’t entirely suitable for real world sequences when a helicopter plays a part. Around half a dozen pages remind us that Moebius is a superb artist, his fine lined delicacy is on show throughout and his vibrant colours are very different from anything Marvel published at the time, providing a unique look. Is it really Moebius working at his peak? No.

This is very, very slim fare, more a sketched outline for a graphic novel than the masterpiece collaboration between two comics titans as touted on its original release.

As ‘Parable’ clocks in at under fifty story pages, the most recent edition couples it with Lee’s final Silver Surfer graphic novel, The Enslavers. Follow the link for a full review, but it’s not good. Seemingly intended as a deliberate contrast to the sermonising associated with the character, Lee tips the balance too far in the other direction with a plot that’s neither credible nor fun. The best aspect of it is Keith Pollard’s Kirby-influenced creations.