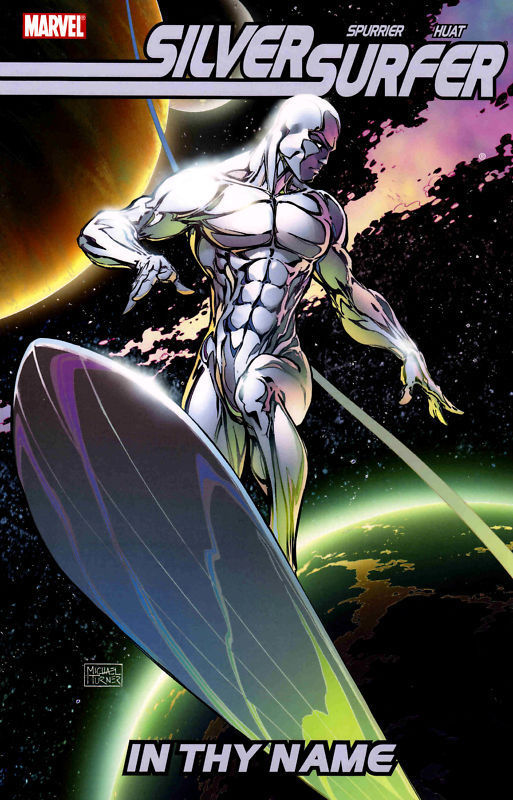 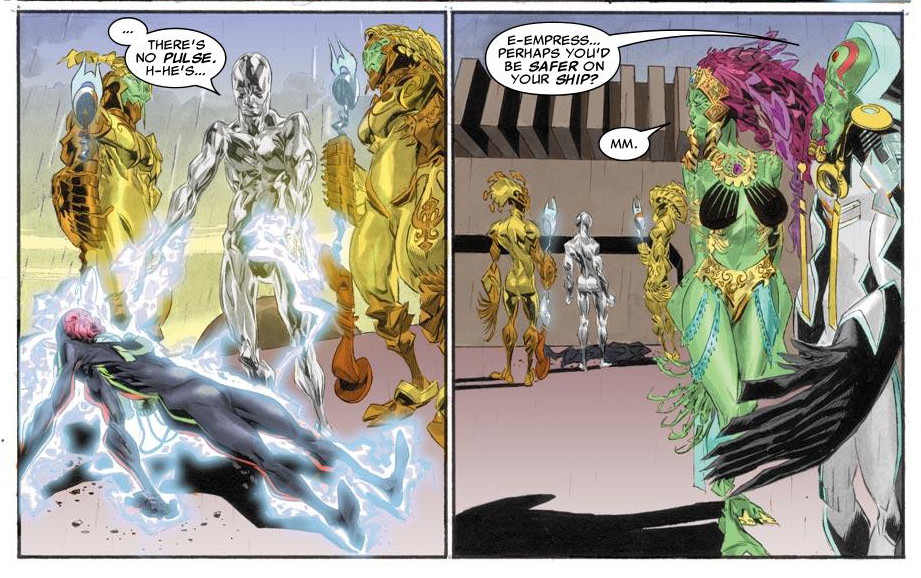 A consistent thread explored by those who’ve written the Silver Surfer is his search for a society with ideals matching his. The Ama Collective might be that society, a hundred worlds peacefully united under the consideration that no difference is insurmountable to reasonable minds. They bring their enlightenment to other races and other planets, and consider those who resist as wilful children. One such race, though, has a legend of an enlightened man who guided them to prosperity, and when he left he promised he’d return.

No, Simon Spurrier’s analogy isn’t subtle, and for those who require it underlining in bold there’s a crucifixion scene, but it fulfils the basic requisite of a Silver Surfer story by incorporating the potential for plenty of hand-wringing. Once some truths are revealed the Surfer sets about imposing what can’t be agreed by mutual respect, raising another obvious question that’s never really answered.

Tan Eng Huat’s art is welcome for the most part, but that caveat is vital. He draws the Silver Surfer as a bony, jagged creature whose chrome sheathe gleams under the colouring of Jose Villarrubia. It’s an odd choice that contrasts the stunningly decorative backdrops he supplies, where the traditional look would for be a far more natural fit. While this could be interpreted as some oblique statement about the Silver Surfer’s outsider status, that’s probably not the case.

As the story progresses Spurrier has comments about the default behaviour of politicians as well as organised religion, but his dialogue captions for the Surfer constantly intrude. Pompous and contrived it may be, but there is an established form of dialogue for the Silver Surfer and while Spurrier doesn’t quite reduce him to Alan Partridge, there are times when he’s close. By the end almost everyone is disappointed, and it’s difficult not to see that as a comment on life, politics and religion.

It’s also worth noting that the year this appeared as comics was when the Fantastic Four movie with the Silver Surfer was released. Although the film wasn’t produced by Marvel, the commercial priority is understandable in the absence of a regular Silver Surfer title. But considering what the movie produced it’s a fair leap to imagine anyone tempted by the movie alone to investigate the character further would continue after In Thy Name.