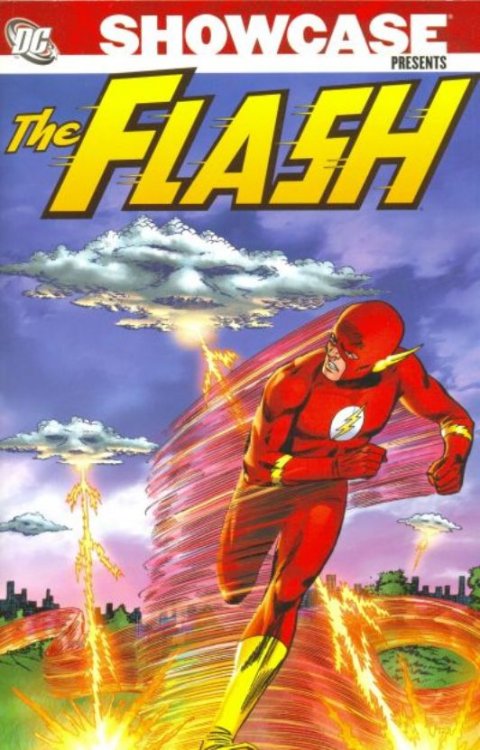 The 1950s Flash kick-started the superhero revival still with us today, and for those wanting to sample the stories of the era without being sure they’ll like them, or breaking the bank for the hardbound Archive editions, this is the place to start. It’s a 512 page black and white pulp paper collection that delivers the first four years of Barry Allen as Flash in all the glory and belly flops.

With John Broome so associated with the character’s first decade, it’s often forgotten that Robert Kanigher wrote the new Flash’s origin story. He delivered an upgraded Flash, introducing ideas that would survive for years, not only in the manner Flash utilised his super speed, but inventive sidelines such as Flash’s costume being compressed inside a ring, and expanding on contact with air. There’s the whimsical aside of Flash reading a comic about his predecessor, and if the idea of super speed being endowed by being bathed in chemicals while simultaneously struck by lightning might not pass muster today, it gave us greatness.

An essential element was Carmine Infantino, his style completely transformed from the cluttered panels that had characterised the 1940s Flash. This Flash in his stylish bodysuit occupied open spaces and resolutely up to date cityscapes. The passage of time has transformed the art from utterly futuristic to decidedly retro, but even with the muddy pulp printing the clear vision shines through.

Don’t come expecting characterisation. Beyond a few recurring jokes such as the fastest man alive consistently arriving late for his dates, character traits rarely extend beyond the requirements of the story. These fall into three broad categories. Flash was never really at home in the science fiction trappings so beloved by editor Julie Schwartz, and was further hampered by Infantino’s design skills somehow deficient when it came to producing aliens. Time has further diminished their strangeness as the shaved head has become commonplace. The human nature and mystery stories stand up somewhat better, not least due to Infantino’s adaptability, being equally at home drawing the Flash facing off against a gorilla or depicting Barry Allen and Iris West dining in a fashionable 1950s restaurant.

The third story type would eventually dominate, Flash characterised to a great extent by the quality of his foes. There were a few false starts, but Broome and Infantino eventually strung together a memorable collection of villains who for the most part based their activities around a single gimmick. The first appearances of Captain Cold, Gorilla Grodd, Mirror Master, Pied Piper, Captain Boomerang, Trickster, and Weather Wizard are included here. So is the début of Elongated Man and Kid Flash, Broome oddly lacking inspiration here, but recovering it for the charming Kid Flash solo stories.

Those preferring Flash in colour can find these stories printed relatively affordably in Flash Chronicles 1-4, and lavishly in Flash Archives 1-3.