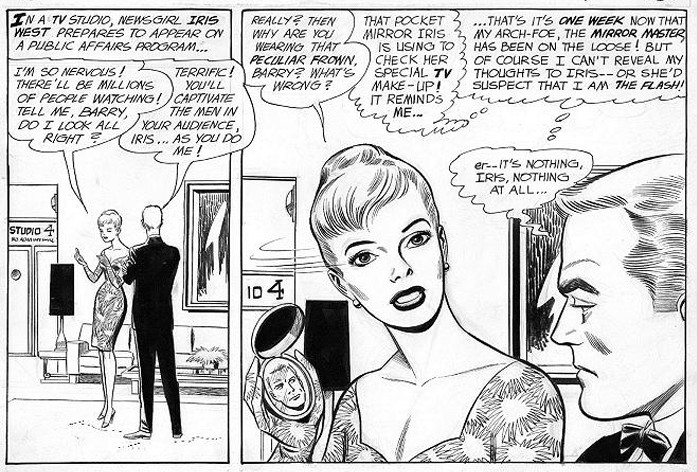 A second bargain black and white pulp paper collection delivering over 500 pages of Barry Allen’s adventures as the Flash, reprinting stories from 1961 to 1963.

By 1961 Flash was the best looking comic DC produced. Carmine Infantino’s impeccable art had a clarity and style way ahead of his contemporaries, and in common with them it was expected that he could draw more than just fight scenes. Some of the non-costumed moments reprinted here are accompanied by some spectacular art. The simple design element of floating balloons supplies a college reunion with a vague otherworldy air and the scenes of Barry Allen reunited with his childhood sweetheart ooze fashionable charm.

It is, of course for the action and super-speed trickery that Flash is remembered, and a full compliment is delivered. Writer John Broome and Infantino produce introductions for Abra Kadabra, Heatwave, The Top and Professor Zoom to complete the first rank of Flash villains, while all those introduced in the first volume return. There’s also the first teaming of them as the combination of Captain Cold and the Trickster requires two Flashes to deal with them.

Ah yes, two Flashes. This collection contains the legendary ‘Flash of Two Worlds‘ in which Flash meets his predecessor, now editorially allocated to Earth Two, by adjusting his bodily vibration to match that of the alternate Earth. At the time, it was possibly seen as an opportunity for writer Gardner Fox to deliver a valedictory salute to the character he’d written in the 1940s, but instead it produced ripples that pass through the decades. The Jay Garrick Flash appears in two further stories here, the second of them re-introducing the Justice Society of America, albeit only in passing.

Teamings of Flash with Green Lantern start here, but the science fiction stories so frequent in Flash’s early days have begun to diminish by the end of the collection. The Kid Flash stories still have a humane charm, and the Elongated Man is a frequent guest star.

Overall, these stories have dated, but not to the point where they’re unreadable as anything other than research. They still entertain, but the only depth is provided by the plots. For those who prefer their reprints in colour, these stories can also be found in the hardbound Flash Archives 3-5, and some are also in the more affordable Flash Chronicles 4.