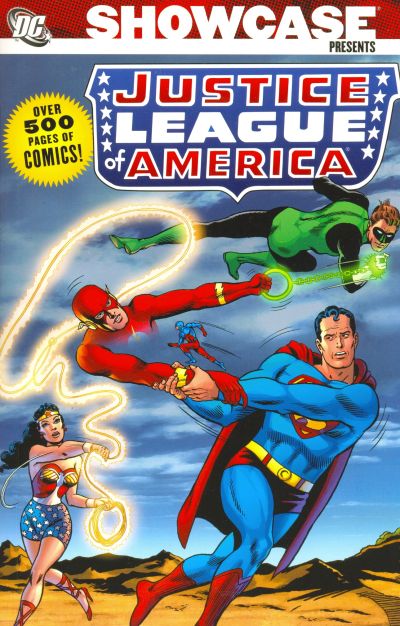 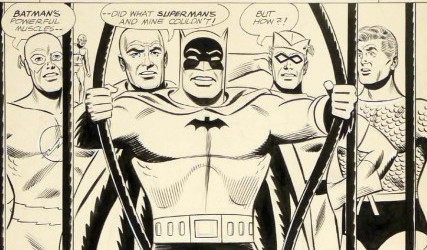 Although produced to a strict formula, there was still enough science-fiction style inventiveness to Gardner Fox’s plots to render the first volume of this hefty black and white compilation series enjoyable. That’s initially the case here, but, oddly, discarding the rigid process of dividing the cast into teams leads to some floundering, and by the final stories printed here Fox is very much on autopilot.

The highlights of this volume are the two meetings of the Justice League of America with their 1940s counterparts, the Justice Society of America, now consigned to “Earth Two”. Superhero team-ups are now commonplace, so the initial thrill of the new available to the comic readers of the 1960s has long since evaporated. These stories, though, retain an element of magic. There is a grandeur and frisson of nobility at the two teams meeting, then teaming again to combat villainous counterparts of a third Earth.

Other more memorable material here includes the induction of Hawkman into the Justice League, a character Fox had created in the 1940s, although Hawkgirl can’t join as, um, the bye-laws only permit one new member to join at a time. There’s also a clever story opening the book in which the JLA face undefeatable foes. It’s possibly the best ever appearance of annoying teenage mascot Snapper Carr.

Mike Sekowsky’s art has a compelling quality. It’s twisted, and he has a questionable grasp of anatomy, yet for a man who avoids backgrounds whenever he can, he doesn’t baulk about illustrating full figures of nine superheroes in a panel to be reproduced at roughly 5×2 inches. He designs some crazy looking aliens, and his resolutely cheerful superheroes are men (and one woman) who enjoy the business of protecting humanity.

Overall, though, very much a timepiece to all but those who recall reading this material during their childhood. For the very keen, this content is also available in luxury colour hardbacks spread between Justice League of America Archives volumes three, four, and five.