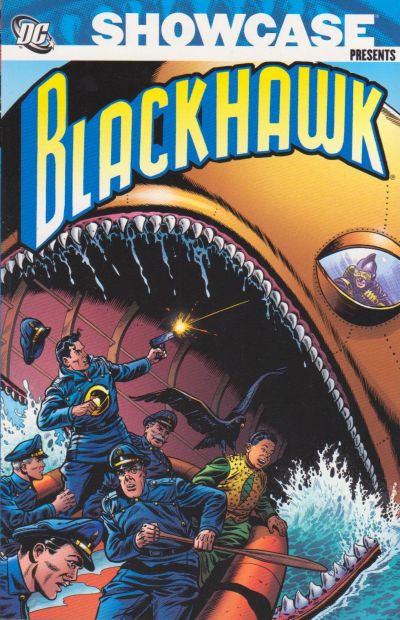 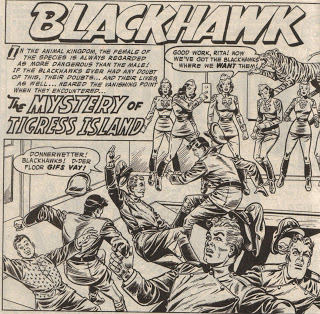 The Blackhawks squad of independent paramilitary aviator/crimebusters ran from the middle of 1941 to the end of 1968, and have been revived several times since then without ever regaining their 1940s heights. Originally published by Quality Comics, the property was sold to National Comics (later DC). This commodious collection re-presents in stark monochrome the first twenty National-emblazoned issues, which began in 1957. The air aces hit the ground running in a monthly title at a time when Superman and Batman were only published eight times a year, instantly establishing themselves as an invaluable draw in the DC firmament.

Records are spotty, so scripter credits are not available. Potential candidates include Ed “France” Herron, Arnold Drake, George Kashdan, Jack Miller, Bill Woolfolk, Jack Schiff and/or Dave Wood. The art remained in the capable hands of veteran illustrators Dick Dillin and Chuck Cuidera: a team who had limned the Magnificent Seven’s exploits since 1941 and meshed so seamlessly that they often traded pencil and inking roles with few readers any the wiser.

Moreover although broadly formulaic, the gritty cachet of the team’s international jurisdiction and bold super-crime or science fictional underpinnings always allowed great internal variety within the tales. With three complete adventures per issue, this tome is a joyous celebration and compelling reminder of simpler yet more satisfying times. The action spans old-school Commie-stomper yarns wherein the Magnificent Seven hold back the insidious wave of Soviet socialism; battle baroque super-villains like Killer Shark, Mr. Freeze and the Avalanche King, and joyously counter numerous attacks by monsters, wizards and aliens. Also liberally on show are glamorous Lady Blackhawk and the team’s preternaturally intelligent avian mascot Blackie, so if leather-clad chicks and birds that do tricks are your weakness there’s lots to look for.

These stories were produced at a pivotal moment in comics history: the last great outpouring of broadly human-scaled action heroes into a marketplace increasingly filling up with gaudily clad wondermen and superwomen. The old-school blend of weary sophistication and glorious, juvenile bravado where a few good men with wits, firearms and a trusty animal companion could overcome all odds was fading in the light of spectacular scenarios, ubiquitous alien encounters and a resurgent wave of costumed mystery-men. This huge time-capsule offers rousing tales of the miracles that (extra) ordinary guys can accomplish and this is terrific traditional all-ages entertainment. 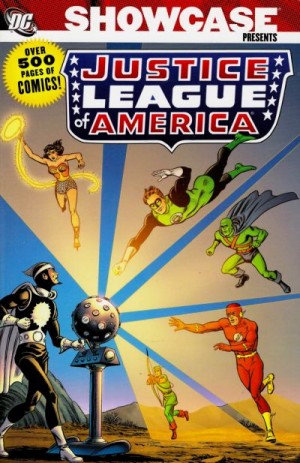