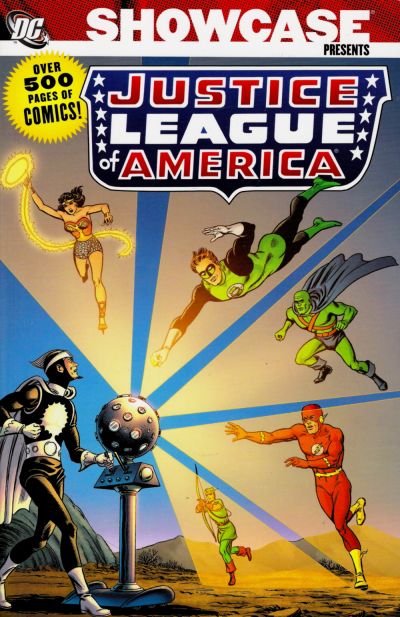 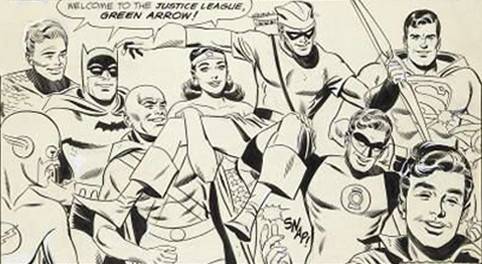 It’s odd how time can devalue. Attempt to imagine yourself as a ten year old boy in 1964 presented with this bumper compendium of the Justice League of America’s first twenty adventures. The thrill would have been beyond compare, possibly a precious memory surviving until the present day. Yet the equivalent child of today is likely to toss the material aside with a snotty “meh!”.

What thrilled and educated the child of 1964 has, sadly become a timepiece. This is not necessarily the fault of creators Gardner Fox and Mike Sekowsky. The children reading the comics of the era cared little about characterisation, and almost every speech balloon here for a JLA member could be attributed to a different character with no discernible effect. Fox’s brief was to provide clever plots that took the readers to different worlds and opened their minds to new concepts, often based on an improbable cover conceived by editor Julie Schwartz. And let’s give Fox some credit. When presented with a cover showing Despero playing chess with Flash and a thought balloon noting that every time Flash moved one of the Justice League shaped pieces a member of the team disappeared, Fox came up with a decent tale to set around it.

It was however, set to the same formula he’d used to write Justice Society of America stories in the 1940s. The heroes gather in the opening chapter and hear of a menace to society. This menace conveniently always manifests three specific problems, requiring the JLA members to split into three teams to deal with each. Having done so they reconvene to settle the plotter’s hash.

Reading the stories in bulk, which it should be noted was never the intention of the original creative team, this repetition becomes tiresome. So does the restrictive quality of Green Lantern always running up against a yellow menace that renders him powerless, and the coincidence of one problem always being set in the sea in order to involve Aquaman.

Sekowsky’s art has an odd, distorted quality, but he’s capable of drawing anything asked of him, and he designs some crazy, mad-eyed villains. Many of them would return to plague iterations of the Justice League for decades: Doctor Light, Amazo, Despero, Kanjar-Ro, Doctor Destiny, Felix Faust, and the nutty villain of the first adventure, Starro, a giant alien starfish.

Within their formulaic restrictions the plots are inventive. The JLA’s second adventure is prompted by a visitor from the future who’s discovered a fragment of paper indicating he defeats the Justice League. The old scrap has deteriorated and words are obscured, but the meaning appears clear until the true version is revealed in the final panel.

Aquaman, Flash, Green Lantern, Martian Manhunter and Wonder Woman carry the earliest adventures as the editors controlling Batman and Superman considered their appearances would diminish sales of their solo titles. They’re restricted to cameos until the final third of the material here.

Those who remember these stories from childhood may still feel a warm glow on reading them again, but it’s unlikely they’ll appeal to new readers. The same material is available on gloss stock in expensive hardcovers as Justice League of America Archives volumes 1–2, with some content spilling over into volume three.