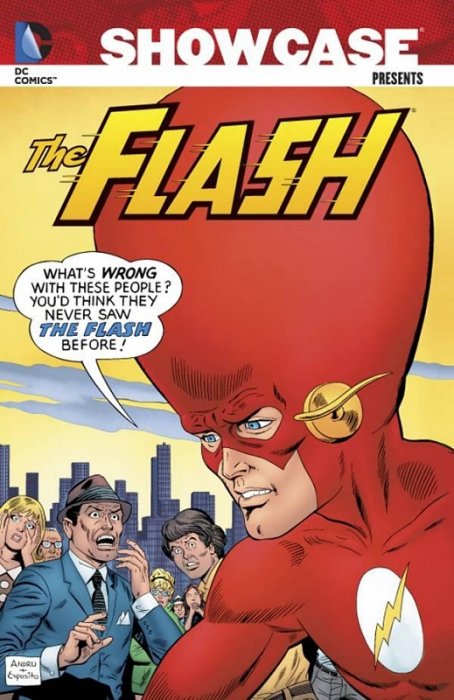 This massive black and white pulp paper collection reprints stories that aren’t available in any other format beyond the original comics, and catch The Flash at a crossroads. When originally published in 1966-1968, the Batman TV series was a massive hit, exaggerating the daft stories of the previous era and all DC’s superheroes adapted to some extent. Thankfully it was lesser in the Flash, but changes were made, and not for better.

Carmine Infantino’s art, once so shiny and modern, developed again. His Flash became bulkier, his panels more frequently closed in tight. Mention should be made of the design delivered for an alien in his penultimate story, to which Marvel’s later Adam Warlock bears an uncanny resemblance. Midway through the book, Infantino is gone, promoted to DC’s Art Director, and Ross Andru takes over as penciller. One presumes, given his new position, Infantino had some say in the matter and deliberately selected an artist whose style was a complete contrast. Andru has artistic strengths, but his often maniacally staring Flash isn’t among them. Subtlety was consigned to the bin. The character is now so beefed-up and so often shown in extreme close up, the panels struggle to contain him.

The stories also changed. For the first time there’s an ongoing continuity element as Barry Allen dithers with the dilemma of whether or not to tell Iris West that he’s the Flash before their wedding. The eventual solution is brief, smart and logical. When the wedding occurs, in a portent of storylines to come, Professor Zoom attempts to replace Allen at the altar. The volume also encompasses two oddities, the generally swept under the carpet Gardner Fox tale of a strange angel revealing how he was responsible for the accident bestowing Flash his powers, and a whimsical debut for writer Cary Bates in which Flash ends up on ‘our’ Earth and requires the aid of editor Julie Schwartz to return home.

Primary Flash writer John Broome, then living in Paris, contributes increasingly less as the collection proceeds, and Fox increasingly more. He created the original Flash, but his work lacks both the inventiveness and humanity Broome provides, and when he attempts Batman style camp it’s obvious his heart’s not in it, and those stories haven’t dated well. Neither have Frank Robbins’ attempts at a similar style, while his other scripts fit Flash’s established format, but don’t hit the highspots.

There may be some interest in the first Flash and Superman race, and there are some engaging stories here, but they bear the same caveat as earlier volumes; they may not appeal due to the exclusively plot-driven nature. Overall, though, anyone wanting to read the 1960s Flash should start with an earlier volume.