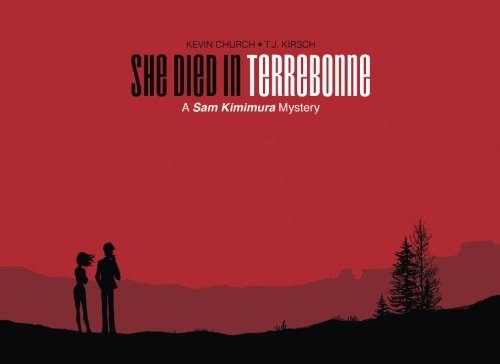 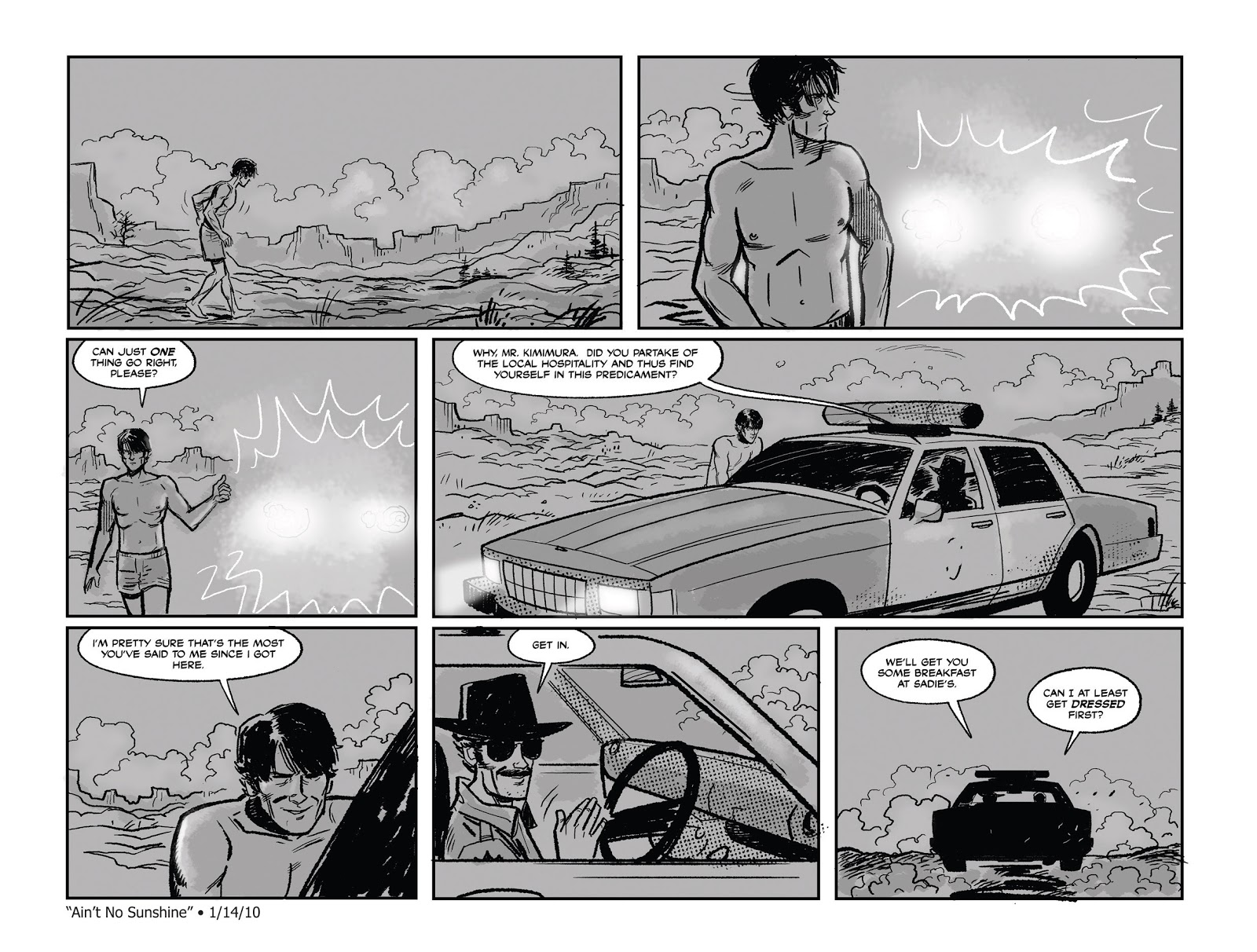 Created as a three tier weekly web strip, She Died In Terrebonne is set in 1973. That’s one element adding distance and colour to a strip about a private investigator. The other is that Sam Kimimura is from a Japanese family settled in the USA for several generations, and one of the points the strip makes is the prejudice he encounters on that basis. He’s been hired to find a family’s missing teenage daughter and tracked her to Terrebonne, Oregon, but she’s discovered dead shortly after his arrival. His purpose then becomes to discover who killed her.

Like many other private investigators, Kimimura’s method is to show his face where it’s not wanted, ask awkward questions and endure the resulting beatings. It’s just as well he accepts these as an occupational hazard, as there are plenty of them. Kevin Church also ensures Kimimura has the personality weaknesses that cement a dissolute personality, having him drink more than is good for him and having his life complicated by an outstanding debt preceding his search in Oregon. Terrebonne is additionally populated by a bunch of eccentric and/or violent characters, although a nice touch is Kimimura developing a grudging relationship of mutual respect with the local sheriff.

T.J. Kirsh is a talented artist who’s sparse with the backgrounds, but then Terrebonne is supposed to be remote territory. He’s good at presenting the characters and how they feel, with a nice touch being that he rarely draws the local Sheriff without his shades. Because he’s good in so many ways it’s a shame that there’s one fundamental that he never really nails: the facial features Sam should have. It’s integral to the background elements bolstering Kimimura that his Japanese heritage is visible to all, but the way he’s drawn is as someone whose family could be ten generations of Massachusetts sailors whose ancestors arrived on the Mayflower. The story works well enough despite this, but it nags.

Presenting She Died in Terrebonne as it originally appeared on web pages is slightly limiting, as it reveals a repetitive procedure of questions and beatings that wouldn’t have been as obvious at a publication rate of a page a week. Neither is there much use made of the 1973 setting. Beyond the meticulously referenced cars, this is a plot that would work as well in 1953, 1993 or 2013, and some of the elements thrown in to reinforce the period don’t ring true. Bob Marley may have been recording for some while by 1973, but would many Americans have been familiar with him then? These are small, niggling points regarding a case that works as presented, but could have been tidied up a bit. Sticking with the landscape presentation, though, is a pleasing touch.

Anyone buying the first print run as serialised comics rather than the graphic novel will find extras not included here, among them many good pin-ups by guest artists and a short strip of Kimimura’s days in the police force in 1967.