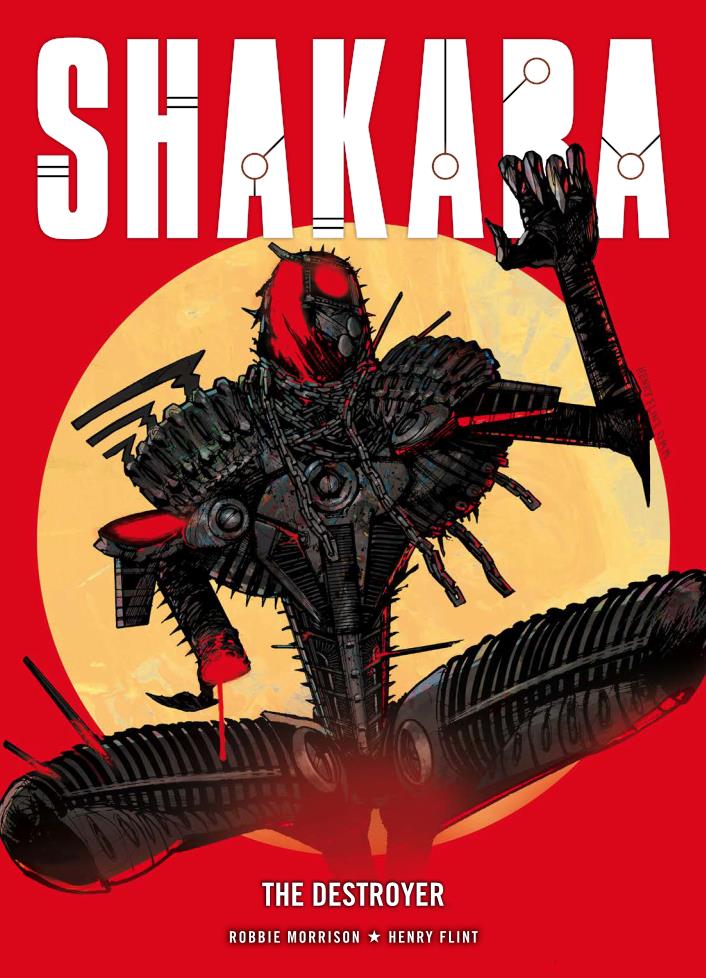 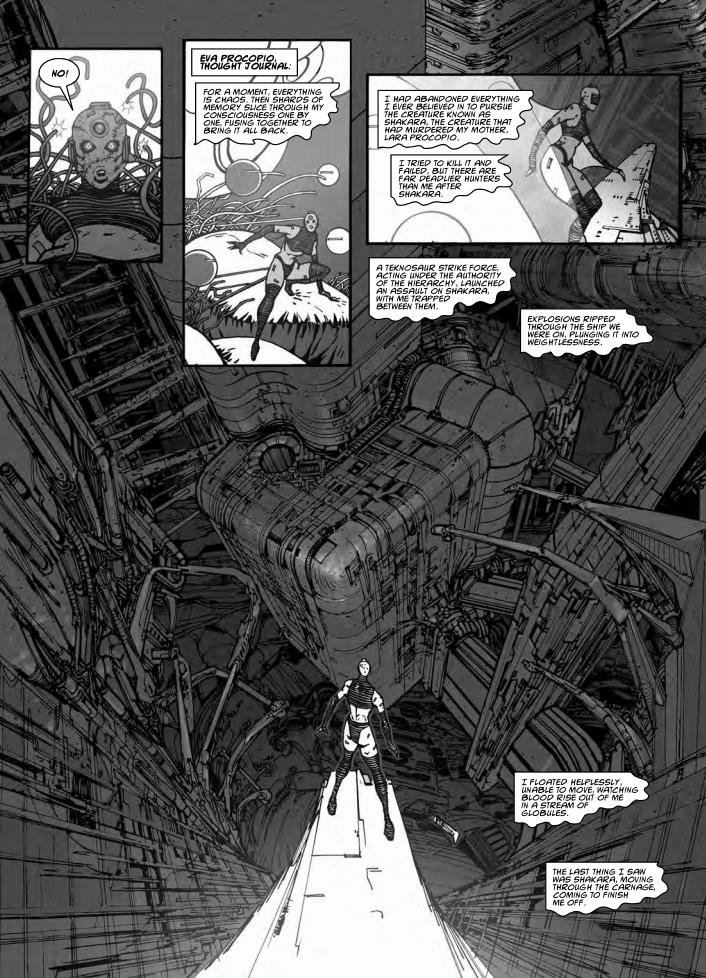 On form there’s not a British artist regularly working who can top Henry Flint for sheer demented imagination, and the opening page of this volume concluding Shakara’s mission of devastation displays that perfectly. Vagina dentata indeed. Flint supplies an insane amount of detail in his pages. Take a look at that engine in the sample illustration, and consider how other artists might have drawn it, probably with around a hundredth of the lines. Even the indentured manga artist would probably baulk at the instruction to illustrate in this manner, yet the odd visual quirk of Flint’s density is that it doesn’t clutter the pages. Everything in his storytelling is clear.

Robbie Morrison notes in his introduction that Flint doesn’t like to draw anything twice, so he considered his brief to up the ante with each successive episode in order to avoid this. Considering he began Shakara: The Avenger by obliterating Earth that was a tall order, but credit Morrison, he pretty well succeeded.

Most of Shakara’s background was revealed in the first volume, but his personal circumstances and constant regenerations are disclosed here. As the indestructible embodiment of revenge Shakara has a single purpose, and Morrison addresses a weakness of the first volume by questioning that purpose, and providing an element of philosophical conflict that Shakara can’t physically address. Physically he’s also presented with a more susbstantial challenge. When it was revealed that the world’s greatest hero, Cinnebar Brenneka had departed never to be seen again it was as good as a signpost, and the legend now returns, not pleased with Shakara. “You are nothing, A ghost. A diseased shell clinging to life”, is his assessment. Also pertinent is Eva Procoppio, capriciously designed by Flint as having a Lego character’s head with flesh moulded around the core.

Morrison constantly morphing the terrain to keep Flint happy results in a sometimes disjointed read, but a happy Flint is a Flint who excels, and produces page after page of wonder. As before, the art is in black and white with spot colours, red associated with Shakara and blue with Brenneka, and as before it’s an extremely effective visual gimmick, distinguishing the pages from anything else that appeared in 2000AD at the time.

Around the midway point you begin to wonder how the intensity and constant escalation can possibly be maintained until the conclusion, but it is, in a miasma of mayhem. Plot is slim, but the art is fantastic. One of science-fiction’s commanding principles should be to present the unknowable as shock and awe and Morrison and Flint do just that.